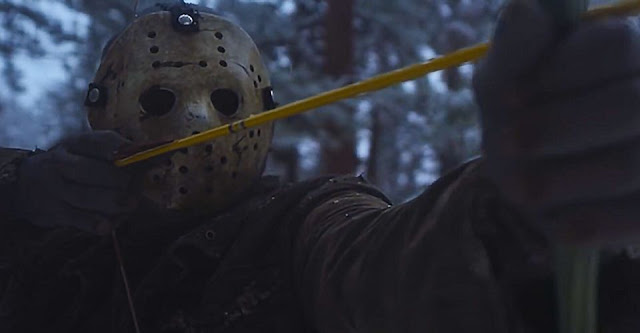 It's the dead of winter and hiker Mark Hill (Courtlan Gordon) makes the fatal mistake of snooping around the abandoned site of Camp Crystal Lake in hope of snapping photos of where all of its infamous murders took place. Unfortunately for him, Jason Voorhees is not just some local legend or boogeyman, which he finds out less than five minutes into the film.

Shades of Marian Crane: Our presumed protagonist, less than five minutes into the story.

The rest of the narrative involves a pair of local cops handling the fallout from Jason murdering the snooping 17-year-old, while Jason retreats to one of the camp's dilapidated cabins and spends quality time with a vision of his doting mother.

NEVER HIKE IN THE SNOW works quite well as a followup to 2017's impressive NEVER HIKE ALONE, and its filmmakers, fans of the actual FRIDAY THE 13th franchise, have once more crafted a fan film that's better than any of the franchise's actual entries. It's a 30-minute episode that ups the previous effort's ante by trimming all traces of fat, giving us a nasty kill almost immediately, and holding our attention through what follows. Within its short running time the film establishes that Jason is largely considered a local legend, reveals the sheriff to be aware of exactly what he's facing, depicts the horrific fate of a young cop assigned to clean up the scene of Mark's murder, and restores Jason shrine to his mother, a la the one seen to great eerie effect in FRIDAY THE 13th PART II (1981).

A remembrance of mommy.
It's short and sweet and absolutely worth your 30 minutes, especially if you're a diehard Jason fan. 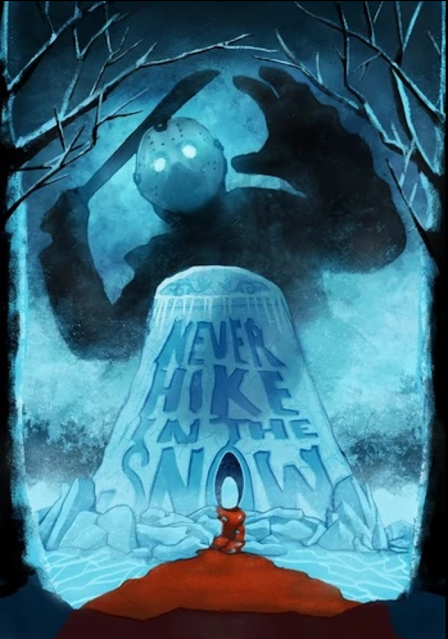