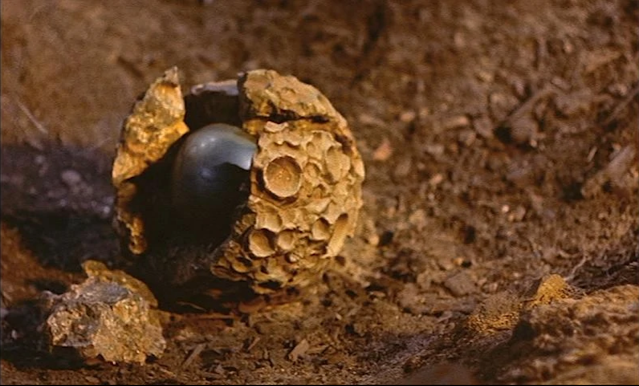 Horrific things come in small packages...
A meteorite plummets to earth and lands in the woods near a podunk American town. A nearby hobo comes across the cooling meteorite and pokes it with a stick, prompting it to crack open and reveal a grapefruit-sized gelatinous mass. The old duffer picks up the goo with the stick and examines it as is slowly oozes down the wood, turning it upside down before it comes into contact with his hand. Unfortunately for him, the mass suddenly launches itself up the stick, engulfing the man's hand. 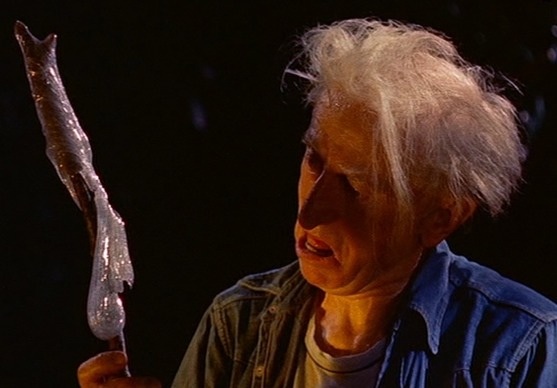 The scene that taught me as a child NOT to poke at unknown substances under any circumstances.

Unable to dislodge the goo, the now terrified hobo staggers out of the woods and into the nearby town in search of help, as the mass has begun consuming his flesh. What follows is a tale of escalation as the implacable titular entity mindlessly rampages through the small town, consuming victim after victim and turning strawberry red in the process (presumably due to all of the flesh and blood it absorbs) and exponentially gaining mass. The only ones who are aware of the threat are a number of local teens (all played by actors who are clearly too old for the roles, including screen legend Steve McQueen, who was 28 when this was released), and though they attempt to alert assorted parents and authorities, no adults believe them because it's the era of fear of "juvenile delinquency" and general mistrust of teenagers, and the local kids are perceived a pack of no-good hot-rodding troublemakers.

THE BLOB is not a full-on shocker, but it is packed with memorable set pieces that demonstrate what a truly horrifying concept the creature is. It's utterly mindless and unknowable, fueled by an insatiable hunger, and its amorphous physiognomy allows it to use through grates, under doors, you name it. It's also eerily silent, wordlessly conveying its lust for sustenance. It's also notable for be being (perhaps unintentionally) Lovecraftian monster, as it is cosmic in origin and quite beyond our understanding. It's brilliantly realized and could not be more simple. It's just a big, hungry blob of space-jelly, and there's fuck all you can do to put a stop to it. Well, that last part isn;t true, and when the solution is found, it's so elementary and simple, it's absolute genius. 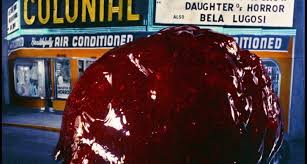 The Blob checks out a double-feature.
In what is arguably the film's most memorable sequence, the Blob oozes its way into a packed movie theater and does its thing, and when it exits it looks for all the world like a big, nasty ballsack. That scene never fails to elicit giggles from the viewing audience. 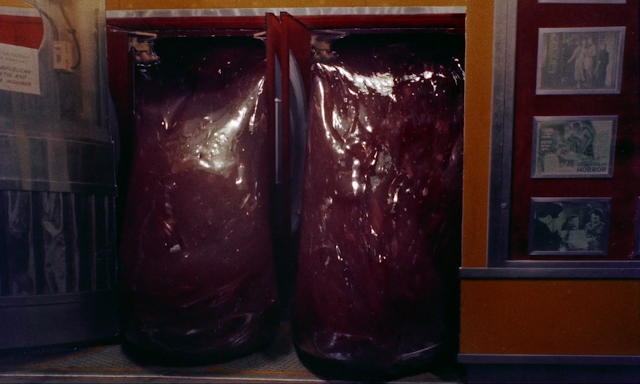 "Jesus, dad! Put on some goddamned pants!!!
Since its release in 1958, THE BLOB has gone on to become a minor cult classic (undaunted by its rather turgid pacing) and something of a cultural milestone due to the sheer originality of its monster. It's an entry-level effort for monster kids and it endears with its textbook trope-setting simplicity, thanks to it pretty much being the Ground Zero of "local teens versus disbelieving grownups" horror trope.
Lastly, it sports one of the most memorable theme songs of all time, penned by no less that Burt Bacharach and Mack David. The second I hear the opening guitar strum of this, I'm instantly transported back to being eight years old, seated in front of my parents' massive wooden-bodied solid-state color television set for a screening of NYC's legendary THE 4:30 MOVIE during one of its beloved "Monster Week" showcases.
Though I was a seasoned horror kid from the age of three, a monster like the Blob was like nothing I had encountered up to that point in my development, and I forever love it for that. 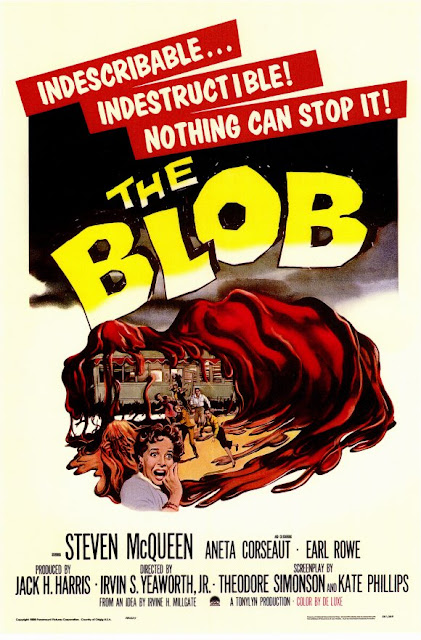