AND SO IT GOES

From the "here we go again" department: I just found out that the design company I work for has been merged with a much larger corporate entity, and allegedly that will change nothing around the place. Well, that would be nice but about twelve years ago Marvel Comics said the same thing to the staff and then the layoff began in earnest. Each day was a tense wait to see who would next get the chop, my own day beneath the axe happening the day before Halloween of 1998, which lead to a three-month severance-package-funded drinking binge with my loyal army of lesbians before getting a job at DC Comics.

I'm not really concerned about being let go because I've only been here for just iver two months and have not become attached to anyone or anything, to say nothing of the fact that while remodeling of the place goes on I have been relegated to a makeshift workplace tucked in a remote corner of the film lab, my laptop perched atop six boxes containing photographic chemicals. (SEE BELOW) 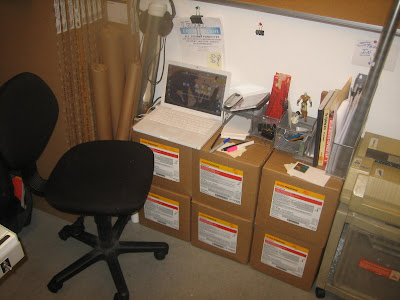 My stealth location actually works in my favor, allowing me a great amount of anonymity until people recall that I'm there and drop off stuff to be proofread or copywritten. In fact, I'm so much the forgotten staffer that when the meeting announcing the merger happened I was not on the company's mass email list and no one in the know bothered to tell me about it.

That's funnier than when my desk at Marvel was in the fourth floor copier room.

dammit someone beat me to the red stapler comment.
maybe it's time considering burning down the spot and taking a bunch of found cash on a carribean vacation!
-big mike