WHAT A WONDERFUL WORLD...

I just received the following email from my man in Eastbourne (that's in England), and was saddened to see that things across the Pond are just as bad as they are here. The scribe is Chris Weston, an unfairly talented cartoonist/illustrator whom I had the pleasure of editing while he drew THE FILTH, and we've been tight ever since. I just wish he lived closer...

Anyway, here's his account of meeting a charming example of the youth of today. Take it away, ya ginger tosser! 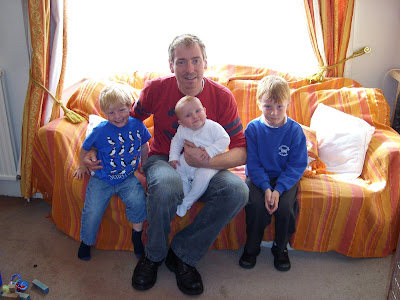 Chris Weston and sons, a lovely group of guys who were out enjoying the day, and not bothering anyone...

So last Sunday, my wife and I take all three kids down to our local park... and while Karen discreetly breastfed Alex, our six-month old, I was busy subjecting my other two kids to devastating centrifugal forces on the swings...

We were right next to a bunch of older children, (aged around nine, I'd guess), one of whom was screaming obscenities at the top of his voice... "F**king C*nt! F**king C*nt! I'll cut you, you F**king C*nt!"

So immediately I was plunged into middle-class dilemma No.1: to intervene or to ignore...

I'm an intervener... I don't like it; it makes my heart pound, even when you're dealing with children... but I do it. I'm the kind of guy who tells people to pick their discarded litter up, albeit politely. So, I asked this kid: "Hey! I've got my kids here... would you mind your language?" He ignored me and continued shouting at his mates in the same colourful tones. So I repeated my question... and tried and inject a bit more menace in my voice... which is, perhaps, laughable for anyone who is familiar with my "poofy-artist" physique.

The kid marched up to me and instantly subjected me to what I can only describe as a relentless and sustained verbal assault involving every swear-word ever created... I tell you, the expression of sheer hate on his face made Linda Blair in THE EXORCIST look like Shirley Temple. Threats of knife-related violence were issued to me amongst this barrage of vitriol.

"I don't F*cking do what my mum tells me, what makes you think I'm gonna do what you say?" he screamed. "I'm not telling you to do anything, I'm asking you to be more considerate", I asserted. But really, it was like expecting an ant to comprehend the workings of a calculator. So I was forced to pick up my kids and march away, leaving the brat with: "Nice attitude, kid. You're gonna have a nice life."

Oh yeah, that told him... Not. My bourgeois sarcasm was about as effective as Stephen Hawking taking on Mike Tyson in the ring. It didn't end there, either... he continued to follow me, all the time reeling off a repetitive litany of X-certificate insults.

By the time we reached the spot where my wife was sat, I was fully prepared to murder the little git, but fortunately disinclined to do the time for it, so I just stood there, calmly absorbing his volley of filth, until he got bored and wandered off... but it was the longest five minutes of my life.

I'm not really sure why I'm sharing this with you... better out than in, I guess. It did ruin my weekend, though, and I am still brooding about it. Did I handle the situation right...? Could I have come up with wittier and more devastating retorts? Should I have walked away like I did? Was that some kind of defeat?

And now, back to yer Bunche.

After reading that letter I was deeply saddened because Chris in no way deserved that crap, and while I know it's impossible to shield one's kids from all the evil in the world, there really is a limit. I mulled the situation over for a while and sent Chris the following response:

As a person who witnesses kids committing all manner of outrageous and unacceptable behavior all the time, I offer you the following thoughts:

1. It's best never to get into it with kids, especially if they are unsupervised, because not only do they not care what you —an adult — have to say to them, they know that your attempts at imposing order are hollow because you can't kick the living shit out of them without A) getting arrested, and B) looking like a total pussy/bully for kicking a kid's ass.

2. If the kid's parents aren't having any control over them — which the wee wanker told you to your face and by the sound of it I believe him — then you, a total stranger, will have absolutely no chance of setting him right. And I don't know about how it works in Eastbourne, but if you tried that move here in NYC you might have ended up stabbed or shot. Each year there are at least five cases of under-twelves shooting, stabbing, and otherwise committing felonious assault against adults, sometimes even dousing them with petrol and setting them alight.

3. I know you were acting out of well-placed parental concern, but as a self-proclaimed intervener you have to choose your battles more carefully. This was a lose-lose situation from the get-go, so it would have been best just to move. Forget about protecting the boys at that instant and instead concentrate on leading by example at home and wherever you may go with them, teaching them that an English gentleman is just that, a gentle man, always being polite to others and generally being someone people are delighted to be around. In other words, you. The kid you saw in the park has no quality dad to learn from — something I know a lot about! — and he is to be pitied. Unless he is put in serious check by his parents — unlikely these days, among both black and white parents — or by his schoolmates who should rightfully kick the living hell out of him as is per the Law of the Schoolyard, I predict a future of petty thuggery or just plain uselessness to society, inevitably resulting in complete and total failure in adult life.

Your encounter reminds me of a situation on the subway about twelve years ago when I lived in Brooklyn's Windsor Terrace neighborhood. I was on a half-full F train and there were two Black kids on board, both about eleven or twelve years old, cursing up a storm. The larger of the two kept on with a litany of "I wanna fuck, an' fuck, an'FUCK!!! I got me a big Black dick right here! Alla you bitches come an' summa dis!!!"

This mortifying display continued for about twenty minutes, and just before I got off the train I walked over to them, gave them a look of total disdain and told them the following: "Do you idiots realize that it's behavior like yours that makes everybody think we're a bunch of uncouth savages? Have some respect for yourselves!"

That statement was met with nods and cries of "Yeah!" from every other black person on the train, and the kids stared at me wide-eyed. Initially flustered and a little bit taken aback and embarrassed at being called out on their niggerish antics, they swiftly recovered their feeble cool and responded with, "Ooooh, looks like nigga has a JOKE! Very funny, muthafukka!" My stop approached, and as I prepared to leave, I left them with the single worst thing you can say to any black person of any age; I looked disappointed and said, "You shame your mothers." The doors hissed open, and as I stepped out the kids sat stunned for a moment and then hurled profane abuse my way, but I know that last zinger hit them at the core, and by virtue of my timing and the sealed train pulling away I won the battle, leaving them no chance for rebuttal or reprisal.

I guarantee that I ruined their day. And I know I said it's best not to get into it with kids, but this was back when I was younger and dumber, plus this was the incident that made me realize the futility of reaching youth that has no sort of positive influence.

So, dear reader. what say you? 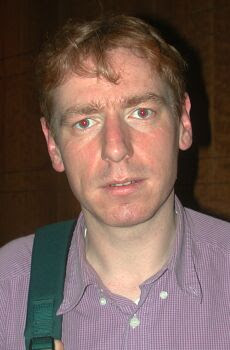 I don't usually actually dial it, but 311 usually sends the shit I do decide to report (like sinkholes in streets) to 911 anyway.

I find a silenced .22 to the left temple works extremely well in adjusting the behavior patterns of today's youth. It also solves the dilemma of their eventual desire to reproduce and spread their chlorine further throughout the gene pool.

Appealing to a sense of justice/fairness/what have you when none has ever been instilled is useless. Sadly, after such conduct has gone unchecked long enough, all that's left is to move on or put the wild dog down.

"These juvenile criminals hit a low level. Born with only the instinct for survival, the highest morality they achieved was a shaky loyalty to a peer group, a street gang. But the do-gooders attempted to 'appeal to their better natures,' to 'reach them,' to 'spark their moral sense.' Tosh! They had no 'better natures'; experience taught them that what they were doing was the way to survive. The puppy never got his spanking; therefore what he did with pleasure and success must be 'moral.'

"The basis of all morality is duty, a concept with the same relation to group that self-interest has to individual. Nobody preached duty to these kids in a way they could understand - that is, with a spanking. But the society they were in told them endlessly about their 'rights.' "...