"THE EAGLE HAS LANDED"-SO FUCKING WHAT? 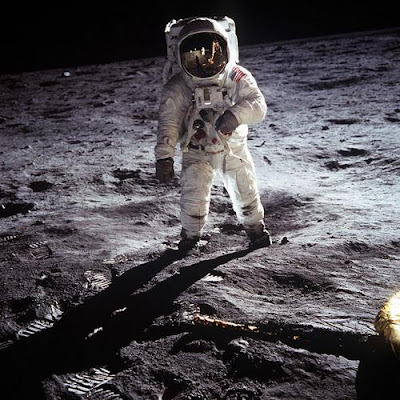 Today is the thirty-eighth anniversary of Neil Armstrong being the first man to walk upon the surface of the moon, and while that was of course one of the most significant achievements in the history of civilization — a "giant leap for mankind," if you will — I wanna know why the possibilities implied by that event have amounted to pretty much fuck all.

In no way do I mean to diminish the accomplishments of the brave men and women who have ventured into space, but I have to say that I'm extremely disappointed by the complete and utter non-existence of certain things postulated by science-fiction and all but promised to us by the incredible technological advances of the past fifty years. For instance, we have no sleek space liners 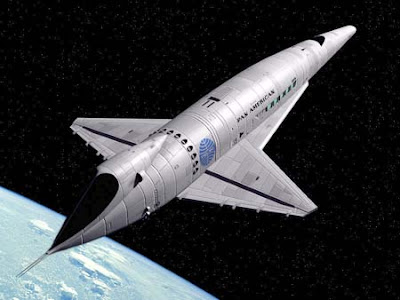 (today's space shuttles instead resembling a bloated version of Snoopy), no enormous space station slowly and gracefully pirouetting in the void to the strains of classical music,

and worst of all, no bitchin' moonbase. 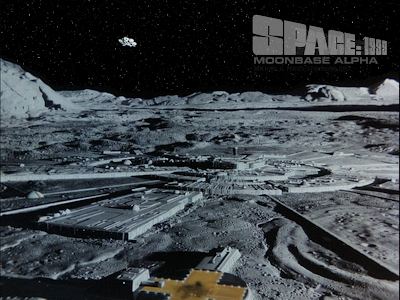 God damn it, where the fuck is my moonbase?!!? Yes, I know the space program is still relatively young, but come on, people!!!

Instead of focusing our time, energy, taxpayer's money and the lives of soldiers on a war that's serving no discernible purpose, I say we get our ass out of fucking Iraq and concentrate once more upon getting back into space and really making a go of it with a concerted international effort that would serve to unite and inspire everybody. When I was a kid the mere idea that we had actually gone to the moon was enough to fire my imagination and spur any number of visions of a peaceful, international family of man that, once freed of its terrestrial constraints, would commence an actual "space odyssey" and explore the infinite in earnest. But nowadays it seems like hardly anyone's even interested in anything other than AMERICAN IDOL or Lindsay Lohan's latest escapade with rehab or flashing her razor-burned pussy for the paparazzi. 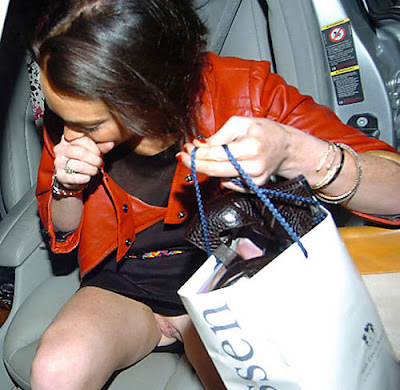 I remember in high school when a shuttle launch would mean tv monitors set up in the cafeteria and crowds of students and teachers glued to what was unfolding.
Nowadays I'm lucky if I see a little blurb about a launch, buried somewhere deep in the back pages. Of course, as you said, the current teen bimbo in rehab gets all the headlines.
What a pathetic society.

The saddest part of it all is we were fed these beautiful ideals of how important the space race was, we grew up believing intently, passionately that reaching out to the stars was a vital human endeavour when in reality it was just a cover story to upstage the Soviets.

Really that's it. You want to know when the jump into space ended? The day Sergei Korolev died. He was the head of the Soviet space program and a brilliant one at that. He was always one step ahead of the Americans, getting a satellite into space, getting a man into orbit, getting a probe to orbit the moon. In fact, if you could visit the southern hemisphere of the moon today you'd find hundreds of little metal discs littering the landscape, each one stamped with a hammer and sickle. They were dumped there by a satellite months before the eagle landed.

The Soviets almost landed the first man too, they were a mere two weeks ahead of the Americans. But then Korolev died of a brain tumour and the whole program backslided. Several catastrophic accidents only caused more delays, but by then Armstrong had planted his footprints and there just wasn't any point to continue. They'd been beaten.

The focus shifted to satellites and space labs and then Star Wars which created another bloom of interest in the 80s, again meant to beat the Russians for nuclear control of the skies.

If the space program gets another kick in the ass it'll be to beat China, but since they're not exactly our enemy there's no real reason to show them up is there?

Meanwhile, all those starry-eyed kids, myself included, the ones who took the "propoganda" to heart will just have to sit here on earth and wonder what the hell happened.

China is our enemy. We're just too stupid to see it yet. The two Biggest Kids on the Block will always butt heads. It's just the way things work.

Besides, everything's fine there as long as their economy is booming. Wait for a major recession or depression, though, and see if their inefficient, corrupt Gov't can handle 1 Billion pissed off citizens or just collapse into chaos. My guess is they'll do another brutal crackdown on anyone who dares to make a nuisance of themselves. It will probably work. Then they can continue selling us cheap crap made in the re-education camps. Walmart will be so happy! Yay!!

Yeah, space exploration is something the whole world can get behind, unlike figuring out how to feed and shelter everyone--so borrring.