HELL, YEAH!!! SPOCK OUT WITH YOUR COCK OUT!

Mister Spock, the coolest space-hero of all time. Fuck Han Solo in the ass!

(pausing to calm down)

It's a good day for geeks. I just heard from a friend who attended the STAR TREK PANEL at the big San Diego convention last Thursday, and it's official: Zachary Quinto, best known as the uber-creepy Sylar on HEROES, will be playing the role of a young Spock in the upcoming TREK FILM. 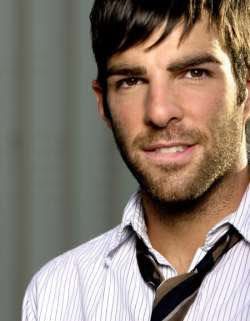 Zachary Quinto, a no-brainer for the role of Spock. 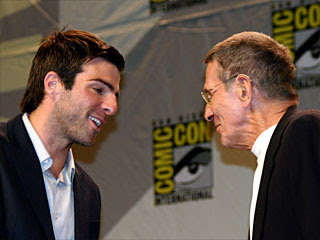 The meeting of the Spocks. And the world of geekdom did shake.

That makes me happier than...holy shit, I'm actually at a loss for words!

And while some of you may think I'm crazy, I hope they take this opportunity to finally give us the death of Spock — for real this time — in a way that hope is quiet and dignified, just like the man himself. Spock was never a man of action by choice, and he earned a peaceful demise many times over, so let's see it happen. I just need that kind of closure for a character I've loved my whole life.

Anyway, read the fucking transcript already!!!
(Yer Bunche stops typing and runs off to raise a celebratory shot to the total excellence that is Mister Spock)
Posted by Bunche (pop culture ronin) at Monday, July 30, 2007