THE BOWL OF HORROR 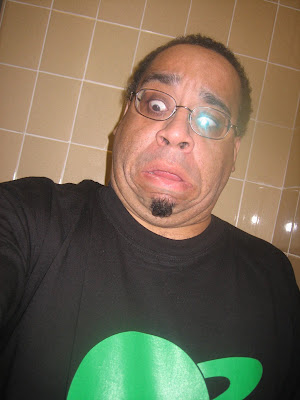 Yer Bunche, faced with the unthinkable.
One of the worst things about any work situation involving a staff of people is finding out things about your co-workers in the worst place possible, namely the bathroom. Ask any of the guys who worked with me at Marvel Comics and they will fill you in on the horror of the 10th floor Men's room, a place that was best to hit only out of sheer necessity, as languishing on the seat could lead to one being overcome with toxic fumes, witnessing the brain-damaged mailroom guy staring at the ceiling with his pants down around his ankles while he took a voluminous piss and grumbled to the invisible "Mister Whoopie," seats covered with the urine of a certain disgusting pig of an editor (who is still employed there to this day, so you do the math, True Believers!), and the frequently sighted horror that was Monstro, the incredibly huge, unflushable U-blocker of a turd that would occasionally return from Davey Jones' locker to stink up the place and lay on the surface like a dead whale.

Today at the design studio I went into the can to answer the call of nature and "grow a tail," and positioned myself on the Throne. Upon getting situated I was annoyed enough to find the seat still warm from one of the huge fat-asses who must have vacated shortly before my arrival, but that bit of unwanted intimacy was compounded when I began to slide about, swiftly coming to the horrified realization that I was now perched where a greasy ass had just dropped anchor.

Yes, you read that right: for some reason the guy who'd been in before yours truly had a nasty, greasy ass, presumably from years of high-cholesterol fast food meals infusing his system with the trans-fats that only yesterday got officially banned from the Five Boroughs.

Channeling my inner Modesty Blaise, I put the horror out of my mind and focused on the task at hand (or butt, as the case may be), my arms shooting out to either side of me with the speed of a mongoose. I willed the bomb-bay door to stay shut — the bomb had yet to drop over Nagasaki — hoisted myself upright and degreased my backside with a wad of balled-up toilet paper. I was so appalled that I lost the urge, and let me assure you that I'm taking a hot shower and giving myself a very good scrubbing when I get home.

article 12 - when using public fecal receptacles, always..always..ALWAYS ring the seat with a protective layer of toilet tissue, before alighting on said receptacle.

Okay, so the mad pee-er was either A or B. There are only two editors still left.

Editor B seems an unlikely culprit, but I thought Editor A always went to 11 when visiting the men's room.

And who was the Mad Pooper? Will we ever know?

(The women's room was pretty clean. We even had a sofa, and sometimes free Tampax.)

Multiple theories abound as to the identity of the mad crapper, but, sadly, no one was ever sussed out.

I'm sure they were purged (pun intended) during one of the many waves of layoffs in the 90's and are to this day destroying another office stall somewhere at another unsuspecting office somewhere in the city.

That is just fucking disgusting!!! Always use toilet paper on the seats you don't know who pissed or worse on the toilet seat!!! PS I wash my hand BEFORE I piss I don't want anything fucking with my best friend!!! I wash after as a common courtesy to everyone else but before is for my baby!!! That goes for using paper towels to leave the bathroom ...you do not know how many people pissed or wiped their ass an then just walked out!!!