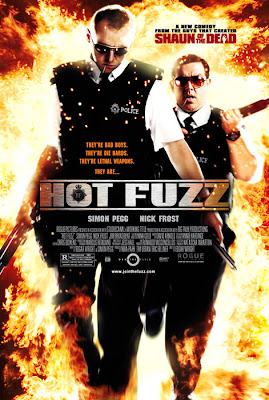 Having greatly enjoyed the same creative team's 2004 British import, SHAUN OF THE DEAD, I held out a bit of anticipation for this year's HOT FUZZ, a comedy billed as a send-up of American action flicks and hailed as "the funniest film of its kind since THE NAKED GUN series." When it was released over here there were many reviews that described it as laugh-out-loud funny and action packed, so when I got my hands on the DVD I was ready for exactly what the trailers and reviews had prepped me for.

What I got was something else entirely.

HOT FUZZ is the story of London supercop Sergeant Nicholas Angel (Simon Pegg), the type of officer who's pretty much a law-obsessed, one-man police force adept at all aspects of law enforcement, in other words the archetype hero for a large number of films in the action genre. When his arrest record exceeds those of his colleagues by over 400%, his superiors decided to reassign him because he's making them look bad, and the rest of the cops on his squad are elated to see him go. Ending up in the remote country hamlet of Standford, Angel is utterly miserable with his new post since the crime rate is virtually non-existent and the town's cops are a bunch of lazy borderline morons. Partnered with dimwitted cop-movie enthusiast PC Danny Butterman (Nick Frost), Sergeant Angel spends his time collaring petty shoplifters, routing underage drinkers from the local pub, attempting to apprehend an escaped swan — owned by a guy whose name sounds exactly like "Piss Taker," a Britishism for one who teases or ridicules; more on that term can be found at http://en.wikipedia.org/wiki/Taking_the_piss — and pulling over speeding motorists, a pathetic far cry from his previous life of kicking ass; it's not that the guy's an adreneline junkie, it's that he's unabe to turn off his drive to adminster by-the-book law enforcement and mellow out enough to adapt to his new environment.

Much of the film is devoted to Angel's fish out of water situation and once we are very (VERY!!!) thoroughly immersed in Stanford's world and its people the plot finally veers into potential "action" territory as various characters meet grisly, suspicious demises that Angel refuses to brush off as mere unfortunate happenstance, much to the annoyance of his co-workers. As the bodies pile up and Angel's frustration grows, his partner manages to break through Angel's round the clock hardassedness by getting him drunk and sitting him through POINT BREAK and BAD BOYS II, just a couple of items from his voluminous action flick DVD collection (impressively housed in a cabinet reminiscent of something Batman would have). Eventually Angel's suspicions prove correct, and the film climaxes with an orgy of guns-a-blazin' carnage that involves damned near everyone in the village, including the school kids.

All of this is crafted quite skillfully and the film is loaded with fine performances that bolster the intelligent script, but the film is neither laugh-out-loud funny or action packed; more than three quarters of the film's just over two hour running time is an endless series of Angel's non-adventures, and the film's humor is laid back to the point of being near comatose in a way familiar to anyone who's ever seen a British comedy that takes place outside of a major city. Standford is populated with the predictable stock cast of quaint village types, and their country ways clash with Angel in ways that you could have written yourself. As for the film being a parody of the action genre, the honest to God action sequences don't happen until the movie's nearly over, by which time it's a case of far too little far too late.

That said, HOT FUZZ is in no way a bad film, but its marketing is quite dishonest, leading a potential viewer to expect something that moves briskly rather than the leisurely-paced tale that it tells. I'm not kidding, it takes over ninety minutes for anything to really happen, and by that time I kept the film on solely to how it ended, my interest having died about an hour earlier; Timothy Daulton's smoother-than-greased-otter-shit villian is fun, and the one scene that made me laugh out loud featured the worst local production of ROMEO AND JULIETTE ever committed to film, but when the orgy of violence finally arrives it just isn't worth the wait, a couple of humorous touches notwithstanding. So all I can say is "Caveat Emptor" if you're looking for a slam-bang action comedy. 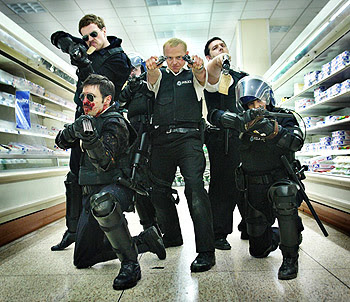 Yeah, but aren't our coppers' uniforms FAR COOLER than your yankee ones!

Huh. My sentiments about the film were almost exactly the oppiste. I saw it with some friends at our local brew & view, and our audience was in hysterics for most of the film, especially the over-the-top climax. Yes, the film takes a loooooong time to get going, but it never lost our interest. True, Hot fuzz isn't as in-your-face action-packed as the average Hollywood product, but we found it much more fresh, entertaining, and imaginative than the usual paint-by-numbers Michael Bay bullshit.

Funniest film I've seen this year. Just top to bottom brilliant and like Shaun it gets better on repeated viewings.