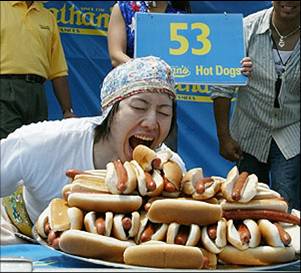 I don't know about you but when I have a slow day at work my mind goes off into various directions, ruminating upon literature, art, haute cuisine, the plight of the rain forest, and a host of other subjects before unwaveringly ending up once more in the gutter.

I was just sitting here at my regal desk of Kodak Matchprint chemical boxes when memories of liaisons past and favorite moments in pornography colored my thoughts a delectable shade of pink, and in the midst of that steamy series of flashbacks I felt my eyes roll back into my head at the remembrance of some truly stellar oral kindness that a certain lady was kind enough to treat me to a few months back (you know who you are, so thank you very, VERY much). I won't go into the graphic details of her osculatory wizardry but the girl had definitely landed upon her toe-curling technique through what must have been considerable experience; here was a woman who reveled in fellatio in the same way that I favor getting a taste of the Kitty, her every caress and manipulation bestowing worship upon some unseen male deity for whom I was the lucky stand-in. And just now I wondered, "What was it like for her to give a guy head for the first time? How did she approach it, both mentally and physically?"

I contemplated the logistics of finding oneself face-to-joystick with a turgid, twitching tent pole most likely wielded by some over-excited adolescent with a face like a tostada and a brain that's shut down in anticipation of busting a nut in your once-virginal pie hole. By this point in your experiences you may have had your girlfriends fill you in on what to expect, or you may have seen the often degrading "money shots" in VHS porn stealthily borrowed from your dad's allegedly well-hidden stash of one-handed cinema, so you've steeled yourself for such eventualities as gagging on the damned thing, the guy staying hard for a short eternity as your jaw goes into rigor mortis, the adhesive properties of Population Paste and how it will taste as it hangs from your uvula, then, as the point of no return approaches, the possibility of the guy grabbing you by the skull or hair and physically restricting you from moving while he pistons away. And worst of all, if you choose not to swallow his genetic bounty and he pulls out instead, the distinct likelihood of getting a pearlescent bolus in the face or eye (I've been told it burns) or even getting his obscene tinsel your hair, any of which could leave you resembling a sentient Krispy Kreme doughnut.

(Hey, the actual physical realities of most sex acts are definitely not pretty and kind of gross when you think about them while not in the throes of committing them, so cut a guy some slack here.)

Some of you come out of your early fumblings with the foaming pipe snake with a fascination and desire for the primal taste of man meat, while some of you grace a partner with this kindness as a dreaded, perfunctory part of your lovemaking, perhaps abandoning it altogether as your relationship with your partner goes on. But either way, you are now qualified to discuss the subject as a doer and not a mere theoretician.

Now my question to you readers of any orientation who have ever slobbered on the bobber is this: What was your first time at the mic like? Please write in and share your story, anonymously if you prefer, but leave no gory detail out. Remember, every shared experience is in some way educational and you just know that the Vault of Buncheness is all about education!
Posted by Bunche (pop culture ronin) at Tuesday, July 17, 2007

Not having choked on the cyclops before, I can't actually comment due to being a straight guy and all. If it helps, I know I love receiving them more than I like, say, breathing.

More importantly, the Gong Show is one of the cultural high points in the history of the human race.

I remember watching that very episode when it originally aired and I was alternately dumbfounded and pissed as to why those no-talent girlies got all 10's amidst raucous laughter from everyone involved just for licking ice pops. Mind you, I was about 7 1/2 at the time...

In hindsight, they were truly gifted performers and deserved their own shitty 70's sitcom.

I wonder if Chuckie-baby had them...

Wow! That was a mouthful! Steve-O, your verbosity belongs in print! I can't remember my first experience, but I can remember last night's clearly. Thanks to my husband for offering me a chance to relax on my back--however, with no raincoats in the drawer, I declined. I wasn't going to disappoint him completely, though! Since my beginnings, I have perfected my technique, although I have not yet learned to disengage my jaw so as to avoid "rigor mortis"! Any tips?
--N

While my parents were downstairs with my uncle and his girlfriend, the girlfriend's son, Derek, and I were up in his room watching Dukes of Hazzard. Being a 14-year-old girl, I found DoH very, very dull, and Derek, an 14-year-old Dungeons and Dragons player, somewhat more interesting. I think started touching his back and his shoulders, and very soon we were in full tongue-down-throat action. I remember his chubby face getting slick with sweat and saliva. Even this started to get stale after a while, and I was looking for something more...satisfying.

At my mom's house, there is still a snapshot of 14-year-old me lounging on his bed under his Led Zeppelin Hermit poster. I'm wearing imitation wayfarers, layered '80's hair, tight t-shirt that says "play me" and tight acid-washed jeans with a huge, shit-eating--or should I say cocksucking?--grin on my face.
--Schlong sucking monster from outerspace.