COMING SOON-WHAT EVER HAPPENED TO THE BOSS NIGGER REVIEW? 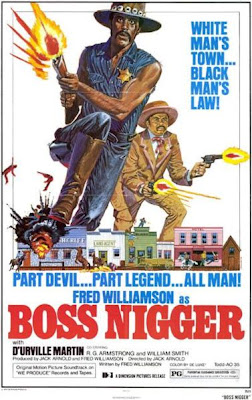 One of my readers just wrote in and asked what happened to the review I promised for BOSS NIGGER, and I have to say that I'm just as annoyed by the delay as he is. Here's the skinny:

I received the DVD off of eBay from a reputable seller, but my heart sank when I saw that it was put out by a company that bills itself as "Blax" Film or some such alias and the two previous times I've purchased films put out by them, specifically THE LEGEND OF NIGGER CHARLEY and an allegedly letterboxed print of MANDINGO, both films were shoddily transferred from what appeared to be seriously-worn VHS tapes, probably rented from some neighborhood mom-and-pop video dump that was on its way out of business thanks to the encroachment of Blockbuster and Hollywod Video outlets.

The copy of MANDINGO was definitely duped from the pan-and-scan VHS release, something I'd had in my collection for years so I know what I'm talking about, and NIGGER CHARLEY was not only obviously from a tape, it was also from an edited-for-televison tape of extremely crappy quality, and both discs bore the imprint of Blax Film. I had won the copy of MANDINGO from eBay and when it turned up as I described, I wrote the seller to complain and was swiftly sent the letterboxed upgrade with a lengthy apology, and the NIGGER CHARLEY disc was purchased at a kung-fu movie kiosk in Brooklyn's Fulton Mall — several square blocks that cater to Blacks and Hispanics, offering up a huge variety of unhealthy fast food, cheap and tasteless clothes, gawdy bling-bling, bootleg CDs and vinyl, and knockoff Black exploitation and martial arts movies — where the proprietors are a family of off-the-boat Nigerians who barely understand English and certainly don't understand the concept of "refund." It didn't piss me off too much because the discs were each ten bucks, and when shopping at that store one definitely takes one's chances. I once picked up a beautiful, fully-uncut print of COONSKIN with its original title intact at this store, so I guess they're as in the dark about potential ripoffs as the customer, but I guess that's the risk you run when selling products that skirt the boundaries of copyright laws.

So when I opened up my copy of the rare BOSS NIGGER and saw not only the untrusted company name but also their trademark barely-literate back-cover copy, I readied myself for the worst. 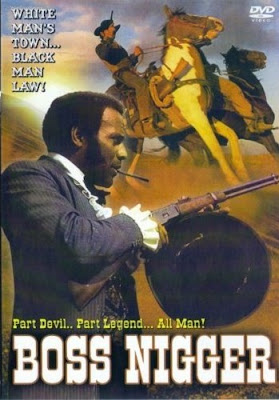 The packaging for an utter ripoff of a DVD.

I loaded the DVD into my all-regions player, a unit that can handle just about anything thrown into it, and the monitor lit up with what may just be the most amateurishly-composed menu I've ever seen. I selected "Play" and the disc jumped to a grainy bit of footage that lead into the obviously-edited opening titles which not only truncated the title to a briefly-flashed "BOSS," the infamous theme song had likewise been pruned of the N-word. Well, let me tell you that this N-word was outraged by that unwelcome and unasked for bit of censorship; how likely is it that someone who would buy a movie called BOSS NIGGER in the first place be offended by use of the word "nigger" in a film from a time and genre where such profanity was not only commonplace but downright expected?

Disgusted, I went back to the menu and found that I could access the "controversial opening credits," so I went for that and got a much better, widescreen print with a completely different opening sequence and the titles and song uncut, but about nine minutes in, the film abruptly stopped and jumped back to the menu.

I tried a bit of jiggery-pokery with the remote and ended up with exactly the same result, after which I attempted to watch it again, only this time in fast forward mode, a trick that revealed the entire film to be encoded onto the disc, but when I tried to play it at normal viewing speed after the first nine minutes the whole think went back to the menu again.

Then I tried to see if all of the other "features" were fucked up as well, and found that the gallery of trailers could not be accessed in anything resembling an order, but rather randomly jumping from trailer to trailer, no matter which one I selected, often repeating the same one over and over. And on top of that the trailers were all culled from VHS tapes and weren't even for films that jibed with the company's theme, instead being tired previews for Hong Kong period pieces starring Jet Li. With that I realized I'd been had, and immediately contacted the eBay seller with all of the info you've just read, adding that I knew it wasn't his fault, he was just the seller of what was a sealed copy of an apparently legit DVD, and that in future he should avoid Blax Films or whatever the fuck they called themselves. In closing I told him that if the company's name had been included in the item listing I would not have bought the disc.

I heard from the guy a couple of hours later and he was all too happy to send me a replacement in case the defect was unique to the individual disc I had received, and I'm now awaiting the replacement in the mail. But, while thinking about it for this post, I decided to check the internet to find the name of the ripoff-artist company that foisted such bullshit upon innocent trash film addicts, and unexpectedly found the following customer review on Amazon.com:

I give this DVD one star. If I could give it 0, I would. It has nothing to do with the film itself. This is based purely on the quality of the disc.

I recently purchased this DVD after seeing the trailer on Synapse Films' 42nd Street Forever, Vol. 1, and was saddened to see that the disc returns to the menu at 9 minutes and 16 seconds into the film. There is no way around this, as the disc has no chapter selections and - on the back of the case - lists the running time as "Uncut". That should have been a red flag.

The film looks extremely entertaining from its preview. I hope a complete version of the film is released on DVD some day, as well as being digitally remastered. This version looks like it was taken from a copy of a copy of a copy of an old VHS tape. Had it lasted past the 10 minute mark, I might have started getting a headache.

I wish there was a way to contact Blax Film, who released this DVD, but I see they are no where to be found online. No wonder, if they release ripoffs like this! Whatever you do, grindhouse fans - don't buy this disc!

Needless to say, that guy hit the nail right on the head and I sent the link to his review to the eBay seller so he'd see the problem was not just isolated to the disc I purchased. I also asked what else he had that I could take in exchange, but I have not heard back from him yet.

So, the way things look for now, I doubt I will see the long-awaited BOSS NIGGER anytime soon.

I was afraid that was going to happen. Actually a mutual friend called it right on the money when he first read that you found "Boss Nigger" on Fuck-bay.

Maybe this is ALL a BIG conspiracy. Remember they did just bury the "N" word recently.

This is a sad fucking day for all involved.

If the film is on there as you say then all you need is the right software and you can remove it and burn it onto another disc that works.