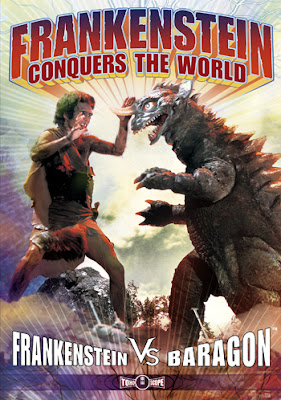 I love me some giant monster flicks, and nobody made them better or crazier than Toho Studios during their heyday. The critters that infested their world came in all manner of metropolis-demolishing forms: giant jellyfish (from outer space, no less, in DAGORA THE SPACE MONSTER), giant psychedelic mushrooms (ATTACK OF THE MUSHROOM PEOPLE), giant spiders and mantises (SON OF GODZILLA), giant walruses (GORATH), giant cuttlefish (YOG, MONSTER FROM SPACE), giant shrimp (GODZILLA VS. THE SEA MONSTER), giant moths (MOTHRA), giant birds (RODAN), giant gorillas (KING KONG ESCAPES), and even a giant cockroach (GODZILLA VS, MEGALON). So once they'd pretty much exhausted the animal and vegetable kingdoms, what else was left except a giant Frankenstein in a Tarzan outfit? In the completely out of its mind (even for Toho) FRANKENSTEIN CONQUERS THE WORLD, you get just that.

According to the story, in the waning days of WWII the Nazis remove the living heart of the Frankenstein Monster from a lab where it's kept in a tank and move it for safekeeping to Hiroshima. Well, not meaning to sound glib about it, we all know how that turned out, and the heart was lost and forgotten. Jump ahead to the present — 1965 — and we find out that there's a fucked-up-looking boy running around the countryside, eating small animals and leaving behind their remains. He's eventually captured and turned over to an American doctor (Nick Adams) who's in the Land of the Rising Sun to minister to victims of the radiation at Hiroshima with his foxy colleague (the toothsome Kumi Mizuno). They soon discover that the kid's not just fucked-up-looking, he's also Caucasian! The details on his exact origins are a little fuzzy: he's either a starving kid who found the case containing Frankenstein's heart and ate the beating organ, or he's a whole new being that grew from Frankenstein's immortal heart, only given a bit of help in the growth department from all that radiation. He's also found to possess fantastic healing abilities that allow him to survive devastating physical damage, even regrowing severed limbs. (I dig the idea of him having grown from the heart, so I'll go with that one.)

After befriending the hot doctor chick, Japenstein escapes into the woods and grows by a couple of hundred feet, also fashioning himself a happenin' Tarzan-style over-the-shoulder number out of miscellaneous animal skins to cover his nekkidness, and thank God for that. I don't think I could have handled the sight of Frankenstein's gigantic nuts flopping around all over the goddamned place.

Of course the army is called in to take Frankie out when cattle and people start vanishing down the gullet of a giant, unseen, burrowing critter that they naturally assume to be the big guy despite him never having dug a hole in his life. It instead turns out to be Baragon, one of the silliest-looking of the Toho monsters, and that's really saying something; he's basically a giant puppy-dog with big, floppy ears, sharp teeth, and a horn that lights up for no apparent reason. 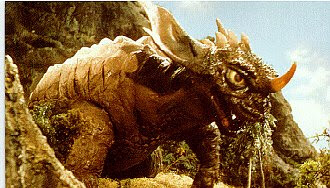 The uber-goofy Baragon (not to be confused with Barugon from the painfully boring GAMERA VS. BARUGON).

Soon enough, Frankie and Baragon are duking it and destroying more raw acreage than a legion of clear-cutters, the whole thing wrapping up with Frankie kicking Baragon's rubbery ass only to be swallowed forever when the earth opens up, also for no apparent reason.

It's all great, stoopid fun and one of the extras on the DVD is perhaps my favorite deleted scene of all time: after Frankenstein kills Baragon, he roars in triumph and suddenly stops dead. A look of utter confusion appears on his face and he practically says, "What the fuck?!!?" as a monstrous octopus sidles out of the forest and engages him in single combat. 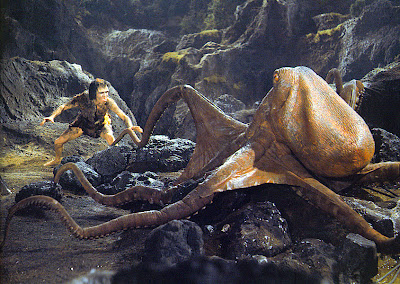 This is the kind of thing that you'll only see in a Toho movie. 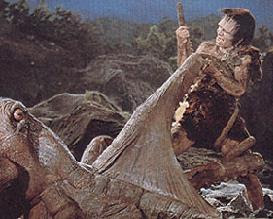 Yes, a fucking giant land-based octopus shows up and the two wrestle their way into the ocean. THE END.

I first heard of this loony epic when I was about six years old and the kid from up the street showed me the feature article on it in the late, lamented THE MONSTER TIMES. His description of the film was quite exciting, albeit erroneous; he told me that the Frankenstein not only destroyed every army on the planet in gory ways that involved their pants getting ripped off and killed about thirty other monsters, but at the end of the film he began to hit the ground with his fist making a "konk" noise, thereby "konk"-ering the world. Ya gotta love it when kids recount movies. Their fabrications are often far better than the actual film, but when I finally saw FRANKENSTEIN CONQUERS THE WORLD about two or three years later on New York City's THE 4:30 MOVIE (of course as a part of the beloved "Monster Week" cycles) I was far from disappointed.

The handsome new DVD transfer is a cheaply-priced two-disc set that features the uncut original Japanese version as well as the slightly shorter US release, and has that great bit with the octopus which is worth the price of purchase on its own for sheer non sequitor value. So if you love this goofy crap as much as I do, by all means pick up a copy and force your CGI-jaded brats to check out the earth-shaking glory that was "Suitmation." 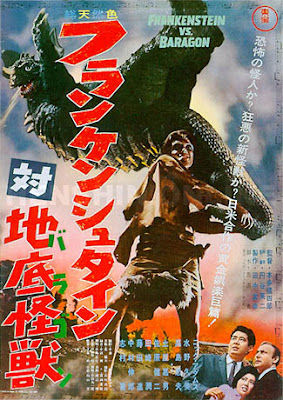