IT'S ABOUT FUCKING TIME! THE RETURN OF NEXUS 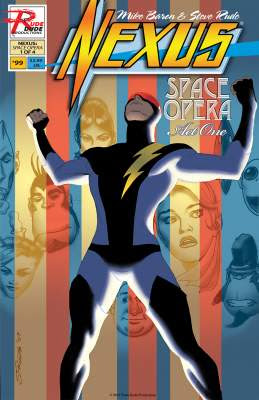 There are some days when it's truly worth it to hit the comic book shop, and today was one such day. For the first time in ten years (!!!) a new issue of NEXUS has hit the stands, and when I unexpectedly saw it on the shelf I let out an involuntary squeak of pleasure, rewarded patience, and plain, simple happiness, my hand darting out to snag a copy like a mongoose rocketing after a blindsided King Cobra.

"And just what," I hear you ask, "is NEXUS?" Let me enlighten you, dear reader. I don't make the following statement lightly, so take me seriously when I say that NEXUS was one of the finest achievements in the craft of comic book storytelling to grace this planet during its regular run in the 1980's and its subsequent sporadic appearances thereafter. I shit you not, writer Mike Baron and illustrator Steve Rude crafted a visually stunning and intellectually stimulating science-fiction epic that never let up on rich characterizations, lush visuals, excitement, tragedy, humor, and just plain fun — provided Rude was drawing it, and not one of the fill-in artists required when Rude's Kirby-meets-Alex Toth-and-has-a threesome-with-Russ Manning-as-filtered-through-Dr. Seuss efforts took the obvious large amount of time to render work of such deceptively simple beauty. Such a sprawling piece of work is a matter of careful nurture and, believe me, it was worth the wait, but, for a number of reasons too involved to recap here, the series ground to a halt mere issues away from the planned finale at roughly issue 100.

And thus, for a decade the faithful have been patient.

Now NEXUS picks up right where it left off, dropping us back into the daily goings-on of the planet Ylum (pronounced “Eye-Lum”), a world populated by interplanetary refugees representing dozens of species and cultures. It’s also home to its founder, Horatio Hellpop, a moody philosopher and amateur archeologist who also happens to be the super-powered Nexus, a one-man execution squad gifted with amazing abilities whose dreams guide him across the galaxy to mete out terminal justice upon mass murderers. His adventures are fast-paced, exciting, and thought provoking, given color thanks to a large supporting cast that most notably features his lover, Sundra Peale, and Judah Maccabee, a hulking, apelike alien with a Mohawk who was raised by orthodox rabbis and became a formidable fusion-powered superhero in his own right.

I won’t even attempt to break down the rest of the cast or try to sum up the ninety-eight previous issues, but will instead urge you to hit Amazon.com and pick up the available volumes of THE NEXUS ARCHIVES; starting with the series’ humble B&W indie origins from 1982, those books are the perfect place to start, and for those already in the know I won’t spoil the surprises in the latest installment, except to say that Sundra’s pregnancy is finally given the attention it deserves, and we get to see Jil the cat-woman in full-on, utterly savage feral mode. I give this first chapter of the four-part “Space Opera” a solid must-have rating for the faithful and urge the newcomer to give it a look.

Thank the gods that this series is finally back!