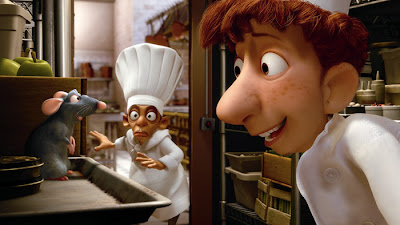 I have a question: is Brad Bird capable of making a bad movie? The guy made THE IRON GIANT (1999) and THE INCREDIBLES (2004) and both are among the finest animated features ever made, so I’d say the guy’s record speaks for itself. His first two features are already classics less than ten years after release, and now comes RATATOUILLE, a glorious animated celebration of the art and passion of those who love cooking that happens to have a rat as its protagonist.

Remy (voiced by Patton Oswalt) is a rat foraging about the French countryside whose abnormally acute sense of smell renders him more discerning about what he eats than the rest of his thronging clan, and during his family’s raids upon the country house of a little old lady he watches cooking shows on television and reads “Anyone Can Cook,” a volume penned by famed — and dead — chef Gusteau (Brad Garrett). His zeal for the subtleties and nuances of flavor leads him to experiment with the items at his rather limited disposal and he soon becomes the first vermin who could rightly be called a “foodie,” but his feral situation changes when his family is routed from the country and a harrowing journey through a sewer maelstrom deposits him in the heart of Paris, right on the doorstop of chef Gusteau’s once-five-star restaurant. Guided by the spirit of the late chef, Remy meets young Linguini (Lou Romano), a would-be chef who is beyond useless in the kitchen, and once the two team up, Remy underneath Linguini’s hat and controlling his limbs like a marionette, the fading glory of Gusteau’s is soon once more on the rise, endangered only by the machinations of the sellout head Chef (Ian Holm) and the threat of Anton Ego (Peter O’Toole), an all-powerful and dour food critic whose scathing review years earlier condemned the eatery to the patronage of the tourist trade.

There are a few fun subplots that move the story along, but those are mostly secondary to the film’s unabashed love poem to cooking, and that was what truly moved me about the whole endeavor, placing the film in a very small subgenre that includes the incredible TAMPOPO (1985) and BIG NIGHT (1996). If you have any interest at all in the preparation and artistry of involved in cooking, to say nothing of reveling in your culinary creations sending the palates of those served into gustatory orgasm, then you owe it to yourself to see all of these films, but most especially RATATOUILLE.

If you’re a regular reader of this goofy blog then you know that I have loved to cook since I was a child and worked professionally as the senior cook in a restaurant for two years, so when it comes to cooking I know exactly what I’m talking about, and RATATOUILLE captures all the things I adore about that pursuit and conveys them with an understated yet fully accessible eloquence that I someday hope to be able to properly express. The dynamic of creation and serving is brought to dead-on accurate life, and I soon forgot that I was watching an animated film; the hierarchy and carefully orchestrated movements of the kitchen crew felt like a documentary to me, and I ate up every frame of it (sorry for the pun), and as the story unfolded I found myself longing to get loose in a fully-loaded kitchen and whip up a batch of jumbo shrimp sautéed in garlic butter and simmered in a reduction of fresh-squeezed lemon juice and cream (I made it the other night, but RATATOUILLE inspired me to make it for an appreciative audience, so to the lady from upstate New York, let me know if you’d like some of this when you come to visit next month). 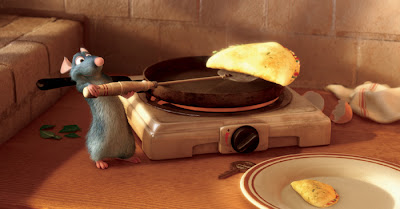 No two ways about it, I absolutely loved, no, adored RATATOUILLE and consider it the best film of the year thus far. But I must warn parents that while the film is totally acceptable for the little ones, it’s very much a story-driven movie that, while a cartoon, is not for kids insomuch as its impact revolves around situations and experiences that they won’t be able to relate to until they reach early maturity, say around age ten to twelve. When I saw the film many parents brought their very young kids to see it, and the little ones were bored and restless, often loudly asking their parents for explanations of what was going on. In short, it ain’t a kiddie flick.

Saw it today with mah lady, and we both loved it. It made a really beautiful statement about creativity in general (not just cooking): if you have a talent and/or a passion for something, it is even more fulfilling if you share that passion with others who enjoy the same thing as you do. I've really enjoyed spending the last far-too-many years sharing my love of color, of words, of music with others who might dig what I create, and it was nice to see a story about someone who wasn't content to keep his imaginative flavor combinations to himself -- this COULD have been a movie about a rat who cooks for other rats (who just shovel down the food), or about a rat who steals the best prepared foods in Paris.

Instead, we got a great story about a rat who risks his life (and his connection to his family) to share his inventions with an audience who never even knows he was behind the food they so enjoy.

And that shot where Anton Ego takes a taste of Remi's ratatouille and is taken back to his childhood was truly eye-burning.

"...jumbo shrimp sautéed in garlic butter and simmered in a reduction of fresh-squeezed lemon juice and cream..."