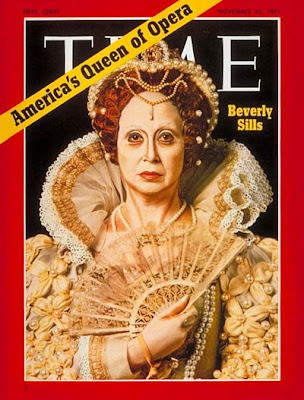 Considering my fascination with punk rock, death metal and other assorted questionable forms of musical expression, you may be shocked to find that I am a bit of a closet opera buff. But there is nothing closeted about my love of the great, now late, Beverly Sills. There are those who favored a Joan Sutherland or a Maria Callas, but when it comes to operatic divas — a term that has lost all meaning thanks to twats like Mariah Carey, Whitney Houston, and, gods help us, Cher — I hold Beverly Sills up to the standard that Bruce Lee set for martial artistry; La Sills may have been "the people's diva," but to me she will always be the Bruce Lee of coloratura sopranos.

When my mother exposed me to opera on PBS in the dark days of the early 1970's, my interest in the bombastic music, elaborate sets, beautiful cstumes, and — as my grandmother so eloquently put it — a bunch of White people standing around shrieking was perceived as one of many sure signs that I was, to quote my dad, "a sissy." I didn't even argue the issue, having long resigned myself to the fact that such a perception was due to narrow-mindedness born of a Mississippi upbringing from the 1930's through the early 1950's, and if the guy couldn't get the sheer amazing power of this musical form then all I could do was feel sorry for him. And Sills' shattering voice, both lilting and filled with emotional resonance, pulled me right into whatever story was unfolding before me, my young imagination utterly captivated by this goddess' magical voice.

From all accounts, Sills was down to earth and unpretentious, her legendary "rivalry" with Joan Sutherland being nothing more than tabloid-fabricated bullshit, and she even appeared on THE MUPPET SHOW, perhaps the coolest TV show ever to guest on next to the 1960's BATMAN series with Adam West. 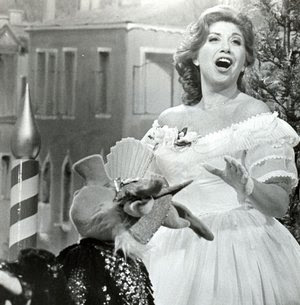 On THE MUPPET SHOW in 1979. How fucking cool was that, right?

And now, after retirement in 1980 and a battle with lung cancer, the mightiest of divas is forever silenced, no more to send her incomparable tones resounding into the cheap seats at the Met. Today's crop of sopranos, while quite good, just don't hold a dear place in my heart, so if it were up to me to appoint her successor, I'd officially nominate King Diamond, lead singer of the legendary Satanic metal band Mercyful Fate and the voice behind such classics as "Welcome Home," "Black Funeral," "Curse of the Pharoahs," "Welcome, Princess of Hell," and the tune that turned me into a Mercyful Fate fan for life, the stunning "A Dangerous Meeting." 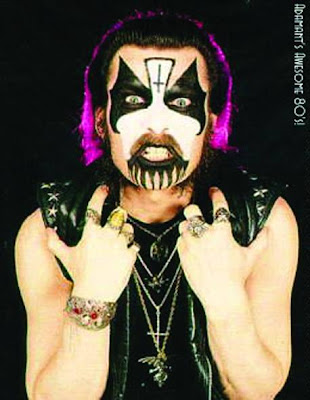 King Diamond-next in line for the soprano throne?

Seriously, don't let his look deceive you. The guy has pipes that both astonish and amuse, with a vocal range that runs the gamut from a kicked-in-the-nads falsetto to a deep, taking-a-monster-dump grunt, so I say shove him into an Elizabeth I dress — frill and all, but with his makeup intact — and let him rip. Put on a copy of Fate's DON'T BREAK THE OATH and judge for yourself!
Posted by Bunche (pop culture ronin) at Tuesday, July 03, 2007

Bev was the bomb diggity!
JVG

I WAS A DAUGHTER OF A FELLOW OPERA SINGER, WHEN US KIDS WERE BACKSTAGE, BEVERLY SILLS WAS A MEAN DIVA,RESTRICTING,SELFISH,UNFREINDLY
LADY...SORRY