OF PARROTS AND POLICE STATES 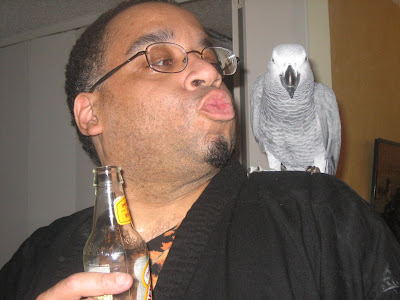 I spent much of the Fourth finally catching up on THE SOPRANOS, and in the evening I made my way to my pal Nicole's place, just a tad west of Ground Zero, in other words about as far west as you can go in Manhattan and not end up underwater.

Nicole is half of a pair of mouth-wateringly cute, cool and funny twins — the other is named Jennifer — who I've known since the fall of 1986, and she and her also-cool husband, Damien, can throw down and party with the best of them. They invited all comers to watch the fireworks from an excellent vantage point that was right on the river, so I went, got my drink on at the pre-party in their flat and schmoozed with their always entertaining friends.

Early into the evening I was introduced to Nancy, a very nice lady who showed up with a gorgeous African Gray parrot on her shoulder. I'm a total softy for birds in general and parrots in particular, so I started chatting with Nancy about her pet. The cute little guy's name is Rusty, and in no time flat he had climbed my arm and contendedly perched on my shoulder, ever the gentleman and not pooping on me even once. I was enthralled by his cute little face, and he charmed the shit out of me by giving me a friendly kiss with a beak that can go through a walnut shell like it was wet paper.

Nancy, seeing the blatant love festival going on between me and my new aviform pal, invited me down the hall to her own apartment and introduced me to some ten or eleven parrots in total, representing many varieties and each one very pleasant and clearly well cared for and happy. Nancy used to breed parrots, and her love for these magnificent creatures was both clearly evident and infectious, reducing me to a gushing moosh. But then it was time to see the fireworks, so I had to return Rusty to his real perch. Bummer.

Then, this morning I saw something that served as a counterpoint to the fun and beauty of the natural world of the birds.

While walking down 42nd Street on the way to work, just across the street from Grand Central Station I saw a five-person VIPER team standing at the ready, complete with head-to-toe black combat armor, frightening automatic assault rifles, and edgy police dogs. New York Newsday describes the VIPERS as "small groups of U.S. air marshals, bomb detection specialists, transportation inspectors and behavioral experts," and ever since last week's terrorism situation in London they've been popping up in eight major US cities, although the press claims that their presence has nothing to do with that. They're allegedly here to beef up security during the holiday, but I fail to see what good they would do if any crazy shit broke out on 42nd and Lex. With my mind's eye I see lots of yelling, the dogs going nuts with barking, rifles being deployed and possibly cutting down civilians, and while I am in no way made to feel safer by the ludicrous presence of armed, camo-clad soldiers at Grand Central — here's a hint: camo doesn't blend in against marble floors and the myriad wonders of the Oyster Bar — I find it incredibly disturbing to see a seriously-strapped team hanging around as residents and tourists walk by. If anything, I feel like the police state has taken another big step toward overt, flagrant visibility, and I wonder how long it will be until I am stopped by an assault rifle-wielding stormtrooper demanding my "papers."

But, to be fair, I feel bad for the VIPERs because even though they are doing what they were assigned to, they clearly looked like they felt out of place in the otherwise postcard-perfect NYC tableu. "Hell'" I bet they're thinking, "This is fucking New York City, and I'll bet nearly everybody on this street is better armed than we are!"

Just a wee something to think about... 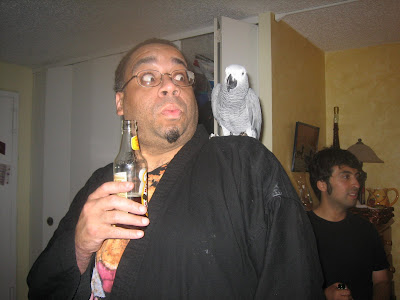 Isn't Nancy's awesome!
Glad you got to hang with the birds!
Sorry I missed you!
& damn... glad I haven't seen the vipers.. jesus christ alfrigginmighty.XOXO Jen V. G.