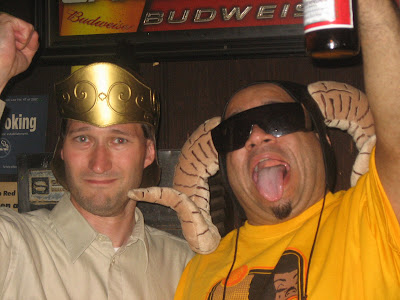 Well, this year's birthday was okay, but it held none of the usual blood and thunder that's been known to go hand in hand with my yearly celebratory booze-ups. No steamy birthday osh-osh, no army of fellow reprobates singing "Drink, Fight and Fuck" at the top of their lungs, no photo-ops with drunken girls resting their bolshy titties on top of my head, no barely-coherent safari to a greasy spoon diner at Jesus-O'-clock in the morning, and — worst of all — no illegal smokables to go with the birthday pussy I didn't get.

But I guess ya can't have everything.

My actual birthday was last Wednesday, so after work I made my way to the barbecue joint and had a few rounds of my favorite combination, the "1-and-1," a shot of Jose Quervo chased with a frosty cold Budweiser, now known at the joint at the "Bunche special." I saw a few of the regulars and they all felt it their duty to buy me round after round, getting me stupid hammered (but strangely still functional) in no time flat. My frequently-mentioned pal Jessica even brought a bottle of champagne for the staff and regulars to share, a smooth move that also garnered points for being the first bubbly I've had in years that didn't give me a headache. 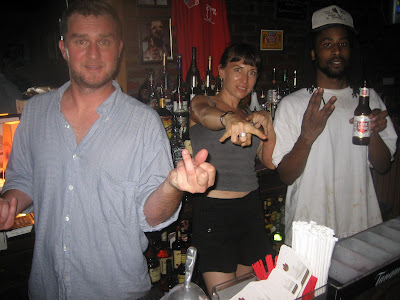 A birthday salute from the Bar-BQ Crew! (L to R: Scott — the Crooklyn Cowboy — Tracey the Waitress Goddess, Shun the Baked) 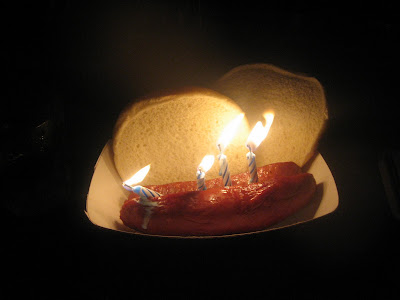 And since I don't like sweets or cake and such, Tracey gave me a birthday hot sausage instead. Melted candle wax and spicy meat may be a grody mix, but I thought it was very sweet.

As I began to fall victim to the liquor coursing through my body, a bluegrass band rolled in and launched into a lively set of good old-fashioned nigger-lynchin' music, in other words an avalanche of countrified Whiteness supplied by musicians whom I doubt have ever been anyplace with the word "south" in it, with the possible exception of the South Bronx (and considering their ethnic stripe that's not very likely either, because if they had gone there they would have been killed and eaten on sight). 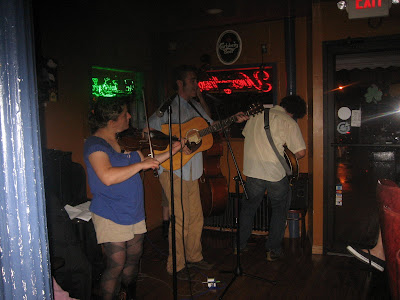 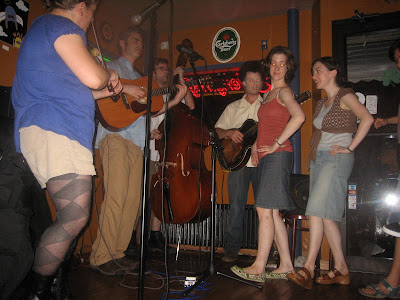 But who cared about authenticity? They were very good, and I was moved enough to voice my appreciation. 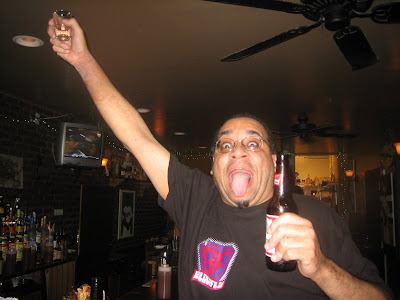 "Go, White folks!" I screamed, nearly causing Jessica to piss herself laughing and fall off her bar stool.

As the evening wore on, more of the denizens of the neighborhood poured into the joint, most notably Carly X, the tiny terror whose blonde Canuckness has turned up on this blog quite a bit of late. Since it was plain to me that I wasn't getting any birthday pussy this year, Carly was kind enough to proffer her post-workout armpit, much to my delight. 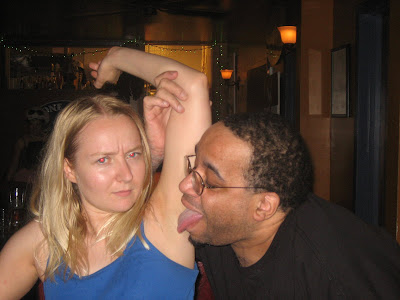 Carly expresses irritation as the photographer intrudes on an intimate moment.

Hey, it may not have been a faceful of steaming snatchola, but I was just glad to have a taste of woman at all that evening.

Sadly, I had to be at work the next morning, so I was a good boy and went home by 11PM. However, the evening's imbibing caught up with me to a small degree the next day, a minor hangover rendering me sluggish and reminding me not to go out seriously partying on a "school night."

Then came the Saturday night gathering at O'Connors, a festering Brooklyn shithole within walking distance of my apartment. 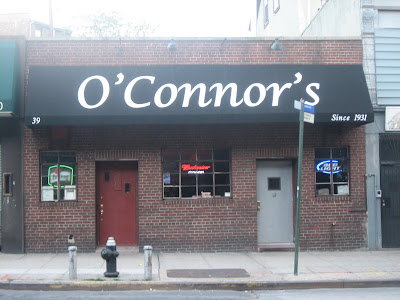 The place has been on 5th Avenue since 1931 and the interior looks like it, what with its slashed-up, falling apart booths and bar stools, dusty, grimy surfaces, and perhaps the cheapest drink prices in the neighborhood. O'Connor's is also the only bar I've ever seen that has one of these: 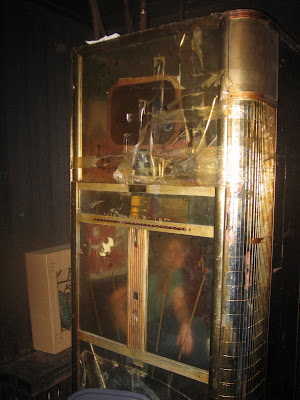 It's an ancient music video jukebox, similar to a Scopitone but from the look of it I'd guess it's a precursor. The thing doesn't work, its hull patched up with decaying packing tape, and occupies the far corner of the place, right next to the stock room and ice machine. It's the most enormous piece of non-functioning decoration I've ever seen indoors, sort of like having one of those monstrous old refrigerators from the 1950's as a door stop. Oh, and they also have an actual phone booth, complete with seat, rotary phone that actually works, and a light that comes on when you close the door, something I hadn't seen since the late-1970's!

I arrived early so I could enjoy a round by myself and catch up on my comic book reading, but soon enough the first guest arrived, namely Mark Bernardo — the guy in the Roman legionnaire helmet in the photo up at the top of the page — fellow ex-Marvel Comics grunt and former apartment mate. The guy's one of my favorite people on the planet, and, along with Patrick Canavan, hands down the best roommate I ever had. It had been a while since we'd seen each other, and it was nice that we had about forty-five minutes to ourselves just to catch up and shoot the shit while Mark praised the lower-than-expected drink prices.

Then the the party proper got started as the rest of the guests began to show up, lead by Jill — aka Red Stapler — 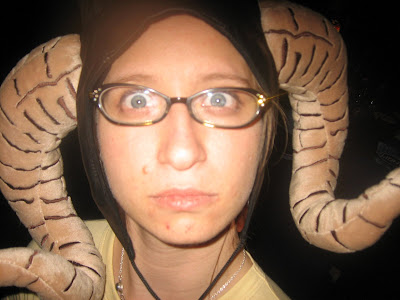 who delighted all with her Jose Luis Garcia-Lopez DC superchicks t-shirt and fantastic breasts. 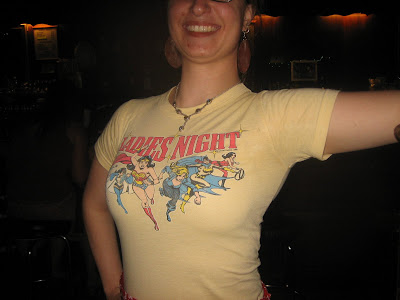 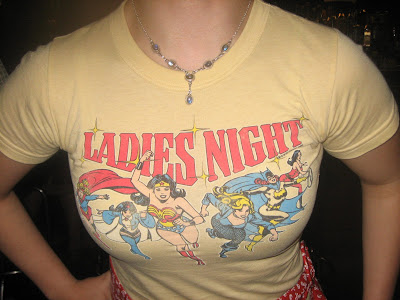 Hey, call me a sexist of you must, but them's some tasty dumplings! Damn, I wish she had a sister who was single... 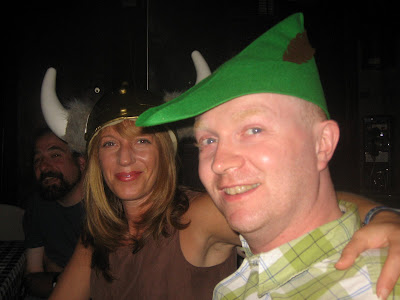 My buddy since college, Sara, showed up with her beau, Pat, in tow, and they got right into the idiotic spirit of the night. Along with them, my pals Paul, Mark G., Jessica, Daniel, Mary-Beth, Sukihoshi and Drongo, plus Carly and a cute friend, all showed up to help me remember how old I have become, or as I prefer to look at it, the fact that I somehow have miraculously survived to see another year.

NOTE TO THOSE WHO ATTENDED BUT ARE NOT PICTURED: folks, some of the pics were too dark or just plain unflattering, so if you don't see yourself here it's nothing personal.

The party broke up around 12:40 AM, a bit earlier than expected, so Jessica and I ended up at my place sharing a forty-ouncer and watching MYSTERY SCIENCE THEATER 3000's unique handling of I ACCUSE MY PARENTS. And, no, I didn't get any there either.

So my birthday was mostly fun, but I do have one gripe to extend to certain people who will read this: if you go to the trouble of asking me for the info on how to get there, or you tell me straight up that you will be attending, you had goddamned well better show up. Some of those who were invited got back to me days beforehand to say they couldn't make it, and I was cool with that. Others gave me tentative "yeses" while others bowed out with other last minute legitimate excuses (the Romulan Sisters and Suzi are especially let off the hook), but to those of you who blew me off for no good reason, I have to state that I'm very disappointed. I know many of you are molecularly bonded to the barbecue joint — big points to Carly for being my only friend from that place who bothered to show — and some of you who I've known since long before I worked there have the tendency to verbally commit to something and then crap out, even promising me that you were coming a mere four hours beforehand (yes, S.H., I'm talking about you!), but in a birthday party situation, especially when the honoree doesn't get to see you that often and was very psyched at the prospect of getting to hang out with you for even a brief time, that shit just ain't cool. Those who showed made me feel cherished, but there were so few of them that it might as well have been opening night for IT'S PAT-THE MOVIE. Hopefully such behavior will not carry over to my forty-third.

So that's the tale of another birthday. I wish you all had made it. 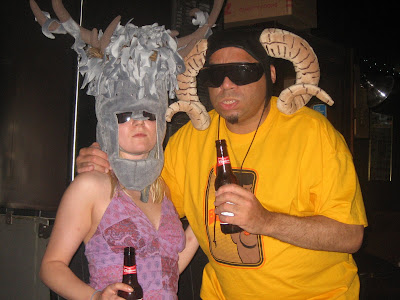 Hey boss, for what it's worth the 4/5 out to Brooklyn was fucked that night. I think I just missed you. I got drunk anyway. I'm a winner!

Go Speed Farmer! You shoulda seen the lame party I had to hit before I could make it to yours - which I enjoyed - esp all the Marks and Steves.

Also I think you've posted my new favorite picture of me. I look like I'm crouched in a cloven scopitone cave.

Say, yo, me n' Drongo had some great fun at your part-ay. Is that Cuervo already gone?--suki