THE MOST DISAPPOINTING COMIC BOOK OF THE YEAR (SO FAR, ANYWAY)

For the first time in quite a while a comic book has not only disappointed me, it has made me downright irate. That comic book is the first issue of the latest relaunch of THOR, written by J. Michael Strackznski, with Olivier Coipel and Mark Morales on the penciling and inking chores, respectively. 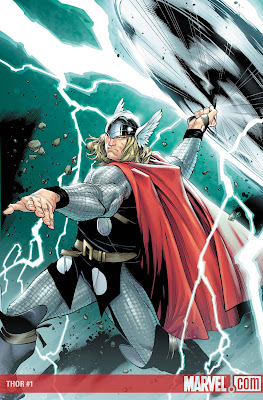 I freely admit to being a lifelong Thor freak, having read damned near every issue of his various series, and while it's had it low points, this current first issue is a major ass-fucking for both the character and the reader. The blame for this sorry state of affairs falls squarely on the shoulders of Strackznski, who continues the Marvel trend of the past few years of having a first issue in which absolutely fuck all happens. The art team turns in visually stunning work that's reminiscent of Frank Cho's stuff (THE MIGHTY AVENGERS, SHANNA THE SHE-DEVIL, LIBERTY MEADOWS), but they are given the thankless task of illustrating twenty-four pages of exposition-spewing talking heads since the issue is nothing more than the deceased spirit of Thor standing around in some sort of limbo, having a dull conversation with his even duller alter-ego, Dr. Donald Blake (a character I've hated since I was a kid; I just never saw the need for the God of Thunder to have a secret identity). After a decidely one-sided three page battle with some demons or something, Thor gets a slightly redesigned outfit and returns to Earth, specifically to some middle-of-nowhere section of Oklahoma where Blake rents a room in a small hotel. END OF ISSUE #1.

If that sounds like it's boring as all fuck, it is.

THE MIGHTY THOR — you'll note "The Mighty" is now missing from the title, and in this case that's deifinitely appropriate — was once a flagship of the Marvel stable, being the company's equivalent of DC's Superman, and in many ways outdoing Superman across the board; Thor's adventures were virtually guaranteed to be loaded to the gills with epic grandeur, eye-rollingly-corny-but-entertaining soap opera elements (Thor's worst enemy was his own control freak of a father), and loads of earth-shattering set-to's and ass-whuppin' of the kind that Superman was too much of a goody-goody pussy to get into (the Jack Kirby-drawn utter humiliation of the Super-Skrull being particularly memorable thanks to the Super-Skrull thinking he could kick ol' Goldilocks' ass. Yeah, right). I mean, think about it. Thor's not a superhero per se, he's an actual warrior deity who's been around for a couple of millennia, putting his size-17 Norse boot right up the ass of all manner of trolls, dragons, and what have you, and being the avatar of a warrior culture's values he would suffer no bullshit and give no quarter. The guy was the badass's badass, and everybody in the Marvel Universe knew it.

Everybody, that is, but J. Michael Strackznski.

If you, like me, are a Thor booster, you will most likely be disappointed by everything in this issue save for the art. Thor's been out of the picture for too long and what should have been a glorious, slam-bang of a first issue doesn't even amount to a fizzling fart, the beauty of the illustrations virtually mocking the reader with shades of what could have been.

Marvel, you've really insulted me with one, and even if the next issue has any sort of action — which, judging from this introspective horseshit, I very much doubt — I won't be buying it. Yes, Strackznski's actually made me not want to read about one of my all-time favorite characters, and I consider that a goddamned shame.

Oh, and is it just me, or does Thor kind or resemble a buff version of Jay from the duo of Jay and Silent Bob? (SEE BELOW) 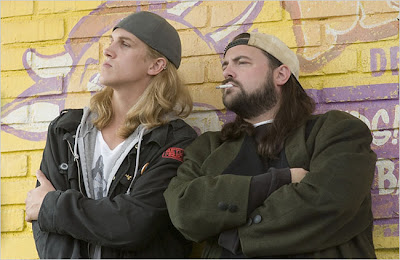 It must be the helmet...

And I'd like to give a special shout-out to YouTube for getting the taste of this crappy comic book out of my mouth with the following items:

They're parts 1 & 2 of "This Bloke Came Up To Me," starring the Mighty Thor and his pal Hercules, utilizing some of that crappy "animation" from the 1966 Thor cartoons with the vocal track cribbed from the genius that was Derek & Clive. There's little action in them either, but at least I got some laughs out of the damned things.
Posted by Bunche (pop culture ronin) at Friday, July 13, 2007

Thanks for saving me a few bucks!!!

Why does Thor have some kind of plate mail shirt on? I love it when invulnerable characters wear armor. His skin is tougher than that those armored pants.

Too bad the new book sucks.

Thor was one of my favorites back in the day, and my favorite issue was "The War of the Gods" (annual #5), which starts off with the Norse creation myth, segues to an epic battle between Thor and Hercules, and climaxes with all the gods of Asgard facing off against all the gods of Greece!