ON THE SIDEWALKS OF NEW YORK: OF FELONIES AND FRIED CHICKEN

The latest NYC shooting of cops occurred two days ago, severely injuring one of two uniformed officers — it has been suggested by one of the attending physcians that the poor guy be unhooked from life support and his organs donated to various organ banks — and leading to a massive manhunt for the culprits. The two gunmen remain at large while the alleged driver of the getaway car has been apprehended, and while it saddens me deeply to see yet another black man busted for doing something incredibly stupid, it pains me even more to see that he compounded his "bad nigger" thuggery by leaving solid evidence in a way that smacked of something Richard Pryor would have written as a gag.

The guy got caught because he left a greasy fingerprint on a box of Popeye's fried chicken.

For fuck's sake, man, it's bad enough that you were apparently knowingly driving a stolen car, but did you have to be a living stereotype and go for a fried chicken meal after a hard day's criminal activity? Thanks for providing more grist for the mill of perception of blacks in the media, asshole. I can hear Richard doing his "cop voice" in my head right now: "A cop got shot by a couple of niggers? Send cars to cover every fried chicken joint in the state. Those bastards are sure to turn up sometime!"

And while the guy may honestly have been unaware of what his friends were going to do, according to reports he was aware that they were carrying loaded guns, to say nothing of his own involvement with the stolen vehicle. And now a cop lies in critical condition, perhaps never to recover. And all over a fucking BMW.

NOTHING TO LOSE AS CON BLAZED AWAY-Greasy fingerprint leads cops to alleged partner in crime.
The story was written by ADAM LISBERG 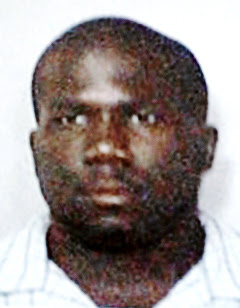 Career criminal Dexter Bostick was one arrest away from a mandatory life sentence and had nothing to lose when he blasted two city cops at point-blank range in a desperate bid for freedom, sources said yesterday. But he couldn't run away from evidence that tied him to the crime, including a greasy fingerprint on a box of fried chicken that led cops to one of his alleged accomplices. The man, a small-time crook from Queens, confessed and pinned the gunplay on Bostick and another man. 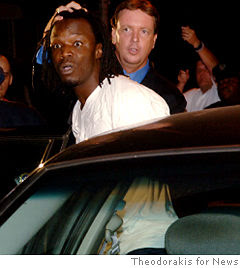 "I didn't know they were going to shoot anyone. We were out eating chicken!" Lee Woods, 29, told detectives after admitting he drove the stolen BMW at the center of the Monday shooting of officers Russel Timoshenko and Herman Yan. Woods claimed he had no idea his passengers, Bostick and another ex-con, Robert Ellis, would start shooting when the cops pulled over their stolen car in Crown Heights, Brooklyn.

Woods told investigators Bostick, 34, faced life in prison if he were arrested again - so he pumped two bullets into Timoshenko's face, leaving the rookie cop at death's door, sources say. "He says Bostick is on parole and freaks out and starts shooting," one source said. "Woods' story is a classic one - he's just driving and everything goes crazy around him."
Woods claimed Ellis, 34, then fired five shots at Yan, hitting him twice as the BMW screeched away. Woods said he never pulled a trigger himself, sources said.

The three thugs dumped the BMW on a nearby corner, but cops used Woods' fingerprint on a Popeye's chicken box to track him down at his girlfriend's apartment several hours after the shooting, sources said - and he quickly implicated his friends.
Bostick and Ellis knew each other from working together at two area car dealerships, and Bostick's sister Nicole is Woods' girlfriend, sources said.

Woods abruptly stopped talking to cops and asked for a lawyer yesterday, sources said. As he was being taken to Central Booking last night, Woods shouted to reporters, "Yo, I didn't do nothing."

Meanwhile, hundreds of cops hunted Bostick and Ellis across New York, the Poconos and beyond - questioning their friends and relatives at stationhouses, putting their pictures on TV, squeezing informants for street rumors and offering a $32,000 reward for each of the two suspects.
Posted by Bunche (pop culture ronin) at Wednesday, July 11, 2007

One of those cops just died, too. These guys are really in the shit now.

Hope his chicken dinner was worth it.