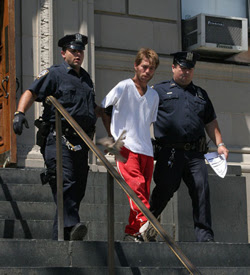 "Don't worry, kids! I'm gunnin' for the Wolfman next! And then I'm gonna whack Frankenstein!"

It takes a real man to kick a peacock's ass. Ladies and gentlemen, I give you John Potts.

From the New York Daily News-

A Staten Island man charged with stomping a peacock to death told police that the gentle bird had it coming, cops said yesterday. "I don't see what the big f-----g deal is about this bird," John Potts, 32, allegedly told cops after he was arrested Sunday on charges he killed the nearly tame peacock in a Staten Island parking lot. "It had negative energy. It came out of the darkness and I kicked it," Potts explained shortly before cops took him to Bellevue Hospital yesterday for a psychiatric evaluation.

Potts allegedly beat and kicked the bird Thursday morning as the animal meandered near a Burger King drive-through window in Tottenville. He screamed: "I'm killing a vampire!" Potts broke the bird's delicate bones, ripped out its bold plumage and left the animal so brutalized that it had to be euthanized, police said.

The skinny bird basher then went on a weekend wilding spree, breaking into his old Surfside Plaza apartment on Friday, where he smashed walls and doors, and attacking his 46-year-old stepfather, Christopher Britian, with a shovel on Sunday, police said. A fedup Britian told cops that Potts was the bird killer they were hunting, law enforcement sources said. "I heard the father. He was angry. He was on the phone with someone saying, 'He killed the peacock!'" said neighbor Amy Giallorenzo, 48. Potts had been living in a Raritan Bay beach shack, neighbors said. "He was odd but he wasn't dangerous. He was never a threat," Giallorenzo said.

Jack Franceschi, 53, found the peacock about three weeks ago in a bar parking lot on Amboy Road and lured it to his backyard with crackers. The family kept it as a pet for several weeks until it escaped Tuesday night. "It bothers me," Franceschi said. "I couldn't believe that anyone could beat a peacock. It was a beautiful bird - never hurt anybody. It's a shame what people do."
Posted by Bunche (pop culture ronin) at Tuesday, July 03, 2007

Should I be worried?

>neighbors said. "He was odd but he wasn't dangerous. He was never a threat,"

The epitath of every serial killer and school-shotgun artisan this side of Kleibold and Harris.

"I heard the father. He was angry. He was on the phone with someone saying, 'He killed the peacock!'"

Awesome. I was wondering if they caught the guy. He needs a straight-jacket in a padded room!

I think he needs to be pecked and shat to death by the Peacock Mafia (you KNOW they have one!).