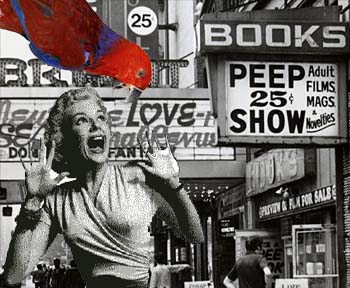 In a scenario nearly identical to the last time I wrote about my habit of befouling innocent oldies, yesterday I had the TV on and there was another one of those half-hour Time-Warner oldies compilation ads, only this time under the title FLOWER POWER, featuring a compendium of — you guessed it! — songs encompassing the hippie era (which the packagers see as having occurred betwen 1967 and roughly 1973) as hosted by a Jurassic Peter Fonda and some unknown blonde who was swimming around in her daddy's balls when EASY RIDER came out.

As the songs began to stream into the air, complete with accompanying footage of mud-covered hippies with beards a-flyin' and no bras — that was just the guys — and the groups on various shows like OLD GRAY WHISTLE TEST, my evil urges took hold of me and in no time "San Francisco" ended up as "Are you blowin' in San Francisco?," "Turn, Turn, Turn" became "O'er everything sperm, sperm, sperm," the New Seekers' treacly "I'd Like To Teach the World To Sing (In Perfect Harmony)" degenerated to "I'd like to teach the world to fuck, and make pornography," and even Lobo's innocuous — and stupid — "Me and You and a Dog Named Boo" found new filthiness as "Me and You Fucked a Dog Named Boo," a song vastly improved by the substitution a one single word.

And Steppenwolf's epochal "Born To Be wild" felt the wrath in a shortened version created by myself, with assists from John Bligh and Keith Karchner, a few years back. For your edification, here's the long version:

Getcher colon runnin'/Sittin' on the toilet
Gonna make a doody/And ain't nothin' gonna spoil it
Ex-Lax is gonna make it happen
Turn the bowl to a bombed-out space
Fire volleys of fecal schrapnel
All over the place!

Like a true coprophile
I was born, born to defile
Make a pile so high
It's gonna
Touch the sky!
Born to defiiiiile!!!

I dunno why, but that stuff just makes me smile. Aah, maturity...
Posted by Bunche (pop culture ronin) at Sunday, July 29, 2007