The crazy shit you find while doing research...

My trawling of the internet in search of Supergirl reference (upcoming article) yielded the following ridiculous results. When the incredibly awful SUPERGIRL movie came out back in 1984 it was made in cahoots with the Popeye's Chicken franchise, and the company's logo shows up a few times over the film's running time. Yes, SUPERGIRL sucked out loud, but I loved Helen Slater in the part; she was pretty, charming, wholesome, and conveyed the character's innocence without making me spew half-digested buttered popcorn all over my shoes. But to see Supergirl hanging out in the parking lot of a Popeye's Chicken somewhere in Southern California, pointing intently at nothing in particular, inspires something one-hundred and eighty degrees away from awe. 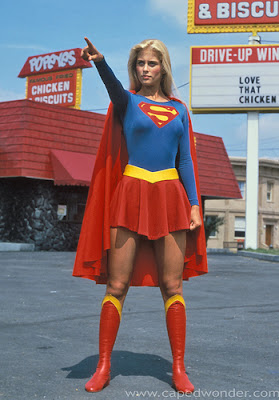 "Which way to Fat Burger? It's three miles down that way, and you hang a left at the tranny hooker with the peg-leg. You can't miss it!"

Somehow the might and spectacle of the beautiful Kryptonian warrior is utterly diminished when your eyes are drawn to a huge sign that proclaims "FAMOUS FRIED CHICKEN & BISCUITS." 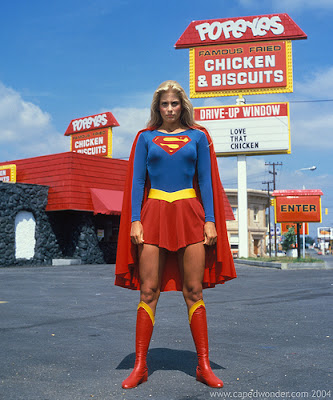 It took all of Supergirl's mighty mental focus to hold in the aftermath of her Spicy Chicken 3-Piece with a side of mashed potatoes and extra biscuits.

I never saw these shots until just this morning, so I'm assuming that someone in the Popeye's main corporate office had the sense not to run them to widely.

And who was the marketing genius who felt it would be a good idea to have one superhero promote another superhero's restaurant chain? Yes, Popeye is a superhero, and if you really want to get into it he's America's very first comic strip superhero, predating Superman by about nine years. And it gets even more confusing when you take into account the fact that the Popeye's chain was originally named for Popeye Doyle of THE FRENCH CONNECTION fame (why???) before at some point appropriating the English-mangling, spinach-scarfing sailor man as their mascot. But nowadays the cartoon connection is lost since the company has not made mention of Segar's sailor since 2006, and perhaps that's for the best because the last time I saw Popeye used in art created for the franchise he was decked out in desert explorer's khakis and a pith helmet. What the fuck is up with that? I mean, a sailor in gear that makes him look like he's about to open the Mummy's tomb, both things that have nothing whatsoever to do with the high-cholesterol sexiness that is fried chicken.

Anyway, the still of Helen Slater as Supergirl with her arms at her sides can be had on eBay, but I have to find the more dramatic one with her pointing so I can frame it and hang it next to my stove.

Oh, well...At least it's not as blatant as Adam Sandler in LITTLE NICKY (2000) in which he plays the son of Satan (not much of a stretch for Sandler), and when his talking bulldog (don't ask) introduces him to Popeye's Chicken, the container's logo unmissable in the frame, Sandler takes a bite from a piece and ecstatically exclaims, "POPEYE'S CHICKEN IS FUCKIN' AWESOME!!!" 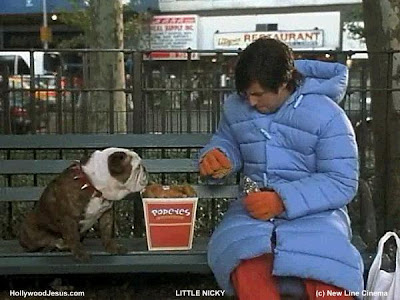 The son of Satan (Adam "I used to be on THE COSBY SHOW" Sandler) receives gustatory advice from a creature who licks his own balls.

How I long for the subtlety of the Eighties...
Posted by Bunche (pop culture ronin) at Tuesday, July 17, 2007

Helen Slater was easily the best thing about that shitty, shitty movie. Faye Dunaway was especially lousy as the villain...

While not as bad as Daredevil or Superman 3, Supergirl did suck in many, many ways.

There was a Popeyes Chicken here in Norwalk, briefly. We tried it one night and, I must say, we thought it sucked. Give me Kentucky Fried Chicken (Not KFC) any day.

ever the argumentative, i not only like popeye's chicken (the strips anyways) and the red beans and rice (yes, i know they tossed authenticity to the wind, but some things you have to take for what they are, and not what they claim to be). and i like little nicky. and once at a party, after pounding a 6er of pabst tall boys and 4 flexeril (might have spelled that wrong, my forays into the world of pharmalogical based intoxication were few and far between) i was able to lick my own balls, and there's something to be said for that...
-big mike