CLOVERFIELD: SOMETHING FOR NYC RESIDENTS TO PONDER 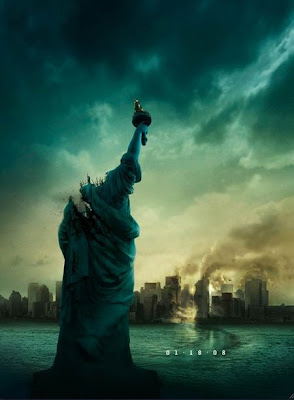 As I gear up to see CLOVERFIELD, the upcoming giant monster movie, I've had a lot on my mind.

On New Year's Eve I asked my pal and life-long Manhattanite Adam Cataldo if he was going to check out the flick. Adam turned his world-weary gaze toward me and said, "I don't really think I need to pay to see a movie about the destruction of New York." Obviously alluding to the outright horrors we witnessed during 9/11, Adam made me think back over my own deeply held love of the cinema of destruction and how my enjoyment of my beloved cities-destroyed-by-titanic-critters flicks was curtailed for quite some time by being an eye-witness to the shattered stumps of the Twin Towers burning and belching forth thick, toxic smoke as the B train slowly crawled across the Manhattan bridge toward Brooklyn, its passengers a silent audience to the unthinkable. The train's progress was at a snail's pace due to congestion after hours of other trains being held as the buildings collapsed in the wake of the terrorist attack, untold tons of debris, glass, girders, and human bodies hitting the ground and potentially caving in the underground transit lines near Ground Zero. Any strong vibrations could have added to the tragedy, so slow-going was in retrospect both smart and an absolute necessity.

Let me tell you, that was some intensely scary shit, and I have never been more horrified in my entire life.

There in front of me was the kind of apocalyptic mayhem I had been enthralled by since early childhood, but those Saturday afternoon visions of badly-dubbed actors reacting to the latest gargantuan whatchamawhoozits to set its sights on Tokyo were imaginative make-believe acted out on a soundstage under the careful watch of experienced model makers and pyrotechnics expert. The reality of such a tableau is something wholly other, and with those visions still fresh in the minds of millions just over six years on, I wonder what kind of reception CLOVERFIELD will find in the Big Apple.

Just something to ponder.
Posted by Bunche (pop culture ronin) at Tuesday, January 15, 2008

I was thinking something along those lines while watching "I Am Legend" the other night. It was kind of cute to see post-apocalyptic versions of all the locations I knew by heart , but kind of not fun all the same.

I was at home the morning of the attacks, but I had the TV off. I heard raised voices from the rooftop and went up to look. A lot of people have said that seeing it on TV gave them a strange sensation of watching a special-effects movie, and I'm here to tell you, I had the same reaction in person. I'm looking at a flaming hole punched in the skyline and I'm flashing on a similar image involving the Pan Am building from that awful Dean Devlin Godzilla film.

It's surprising we still have an appetite for this stuff, isn't it? Cloverfield is only the latest of a buttload of end-of-the-world (or end-of-the-world via New York) movies in the last several years. The post-9/11 CGI doomsday blockbuster is practically a genre of its own. I'm kind of fatigued of it at this point.

It makes you wonder, how is this escapism? Am I the only one who's seen the mis-en-scene of "I Am Legend" in their own head a billion times since 2001? It doesn't feel thrilling or darkly fascinating anymore, it feels fucking lived in. I've had days, walking around the city in the grip of an anxiety attack, and seeing that nightmare scenario almost more clearly than I can see world in front of me.

It is kind of interesting to think of a balls-to-the-wall American take on Godzilla in this climate. I used to wonder why in the world the Japanese would have wanted to see a Godzilla film not so long after Hiroshima. And now here we are. It must be true, the old chestnut about how horror movies allow us to air out our subconscious terrors. There must be something to that.

>I used to wonder why in the world the Japanese would have wanted to see a Godzilla film not so long after Hiroshima.

Watching the original, pre-Americanized Gorjira (only recently available in the US), that's easier to understand. The real film is a coming-to-terms horror film, not a cute romp through plastic buildings.

In many ways, Gorjira is an elegy for the dead (in scenes snipped from the US cut), a metaphor for the unthinkable (Gorjira almost looks, in some scenes, like a walking a-bomb cloud), a coping method (Japanese courage kills Gorjira), an expression of cultural guilt (witness the doctor's suicide aftrward), and a revealing condemnation of the horrors inflicted upon the Japanese people (minus little inconvieniences like the Bataan death march and the rape of Nankeen). Japanese people wanted to make and see the original Gorjira because the horrors of WWII needed to be expressed, symbolized, and ultimately purged.

It's telling that the first Tokya audiences laughed nervously when Gorjira smashed a landmark right next to the building where the film was being played... and that American audiences were stone-silent after Gorjira's rampage when then original film finally premered here a few years back.

Hmm. Something to think about, Steve. I know it doesn't take much to put me back in the bewildered trance I was in on 9/11. That movie has the potential to mess with a lot of minds.

My husband and sister saw this earlier this evening (I couldn't make it out to the preview screening). Both of them appeared at the door looking very queasy and sick. The theater was packed and the only seats they could get were in the fourth row and after two hours of hand held camera work they both felt as if they'd been through a paint can agitator.

It's been several hours now since getting back and they're still complaining from the effects and neither want to see it again any time soon.

I asked them what they thought of it. From him: "It's like reading a so-so book on a rollercoaster. Kind of tired of this kind of nihilism lately". From her: "Average relationship problems, bit of a love story but hard to separate that from the vomiting."

Which leads me to want to wait and see it on DVD since it's pretty clear the director hasn't clue one how to shoot for the bog screen. Seems to be a lost art these days.