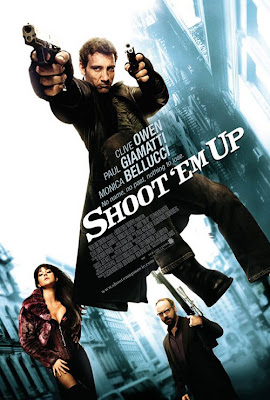 If you’re reading this blog in general and the FLICK YOU! section in particular, I’d wager you’re more or less on my cinematic wavelength and are able to appreciate highbrow fare like SOPHIE’S CHOICE while getting your grindhouse on and merrily wallowing in flicks loaded to the gills with gore, monsters, titties, ass-whuppin’, rock ‘n’ roll, and plain old rampaging pandemonium. Moviegoers of our more or less open-minded ilk can readily enjoy a picture that has nothing on its mind other than wanting to entertain the living shit out of us, and to hell with any delusions of grandeur.

Which brings me to SHOOT ‘EM UP.

When this flick came out a few months back, I’d heard from several people who’d seen it that it was offensive in its “irresponsible” violence and almost total lack of a plot, and that assessment intrigued me for two reasons:

1. Irresponsible violence and an almost total lack of plot are two elements that can sometimes spell an entertaining viewing experience for an action movie junkie.

2. The people who told me they hated it are folks that in no uncertain terms I consider to be complete and utter douchebags across the board, and a film that smacks of anything less than tony aspirations is anathema to their snooty sensibilities.

With those points taken into consideration I finally got around to checking out SHOOT ‘EM UP for myself, and was very pleasantly surprised by its simplicity and Jack-Russell-Terrier-on-Benzedrine action.

What passes as a plot involves a mysterious carrot-eating badass named Smith (my man Clive Owen) who steps in when he sees an extremely pregnant woman being pursued by a horde of heavily armed nasties in black couture (their look is kind of mid-eighties tacky, as opposed to our hero’s stylish leather trench coat). Coming to her rescue, carrot-guy proves to be a marksman of such talent that it’d make both Chow Yun-Fat and John Woo put on frilly dresses and shriek “Jesus H. Christ!!!,” plus he’s such a mensch that he even delivers the woman’s baby in the middle of a hellacious firefight. Sadly, the mother catches a stray bullet in the cranium, so our hero makes off with the newborn baby boy, having zero clue as to why the bad guys wanted the mother dead in the first place or why their sights are now set on a kid who’s been out of the womb for about three minutes. Enlisting the aid of lactating dominatrix “D.Q.” (Eye-talian deity who walks the earth among us mere mortals, Monica Bellucci) as a wet nurse, Smith embarks on an odyssey of mayhem with uber-asshole villain Paul Giamatti hot on his heels. As bullets fly all over the place and CGI blood bukkakes the camera’s lens, there remains one simple question: exactly why the fuck is all this going on? The answers to that question work strictly on a comic book level, but it’s a hell of a lot of fun getting to them.

SHOOT ‘EM UP is basically a live-action cartoon played with a completely straight face, and if you approach it with that in mind you’ll probably find it to be a hoot. Owen rocks as an improbable badass, Bellucci reigns as a literal Madonna/whore (my god, those big brown eyes!), Giamatti chews the scenery with shameless gusto, and the whole thing was just so over-the-top that I had to giggle along with the feature-length joke. In fact, there were a couple of moments when I actually exclaimed “Oh, gimme a fucking break!” while laughing my ass off, so TRUST YER BUNCHE and check this one out.
Posted by Bunche (pop culture ronin) at Wednesday, January 30, 2008

I saw this in the theater when it was out. BAD. ASS. Also Clive Owen? Screaming hot, but he needed to be naked more. Monica Bellucci? Also screaming hot. She is in my triumvirate of Women I Would Totally Go Lesbo For (the other two being Angelina Jolie and Salma Hayek). Mr. LRA loves shit like this so it was easy to get him there. Fun for the whole family--glad you enjoyed it.

Recalling Clive's badass turn in in Sin City, I can totally see this film being a lot of fun.

Now I am confused... So what makes the violence in this movie acceptable and not so in the latest Rambo flick? The blood and gore in that was also quite over the top and cartoony.

Steve-o, this flick from it's advertising down to it's very core of beingness is an obvious parody/salute to john woo, chow yun fat, gun kata et al awesomeness. I haven't seen it but from the trailer you can tell it's one big running gag. Those douchebags you mentioned must also be mentally deficient mongoloids if they couldn't pick up on that, which leads me to the top of the $100,000 pyramid ...douchebags, idiots with a high self opinion, people that follow what the "intelligencia" hold as high art without thinking for themselves, scatophages... scatophages... idoits...
burrrrnp burrrrnnnnpp
aww i'm sory tommy, the answer we were looking for was: people who Bunche converses with, that make his friends question his sanity. ...but we do have some lovely parting gifts for you from remington, l'eggs, and kikoman

Any film with a shootout scene choreographed to "Ace of Spades" by Motorhead possibly challenges Citizen Kane for greatest piece of cinematic excellence ever. ;-)

Based soley on Matt's comment, i am purchasing this film tonight! Lemmy + guns = magic
... my only remaining question, does it use enough doors as semiotic vehicles to challenge Kane's stranglehold on that category? And can I use the term semiotic vehicle without sounding like an ass?

>Any film with a shootout scene choreographed to "Ace of Spades" by Motorhead possibly challenges Citizen Kane for greatest piece of cinematic excellence ever. ;-)

Okay, yes - that's badass. But Gross Pointe Blank did it over a decade ago. Not saying it's not cool, just sayin'...

It's called "Shoot 'Em Up." What the fuck did they THINK it was about - deep conversation?

(With regards to Rambo, no one is taking Shoot 'Em Up" seriously. Folks have been taking Rambo seriously for decades... which is pretty fucing sad, really.)