DOES ANYONE ELSE FIND THIS HILARIOUS?

There's a series of television commercials currently airing for reverse mortages from the Senior Lending Network that feature Robert Wagner as their aged-yet-cool spokeman, the company relying on Wagner's affable charm and recognizable status from his run on HART TO HART (1979-1984), starring opposite Stephanie Powers (formerly April Dancer, aka THE GIRL FROM U.N.C.L.E.). 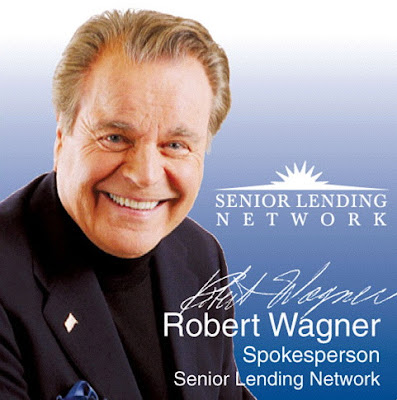 That's all well and good, but I have to question the choice of Wagner for this position because, well, would you create a series of ads meant to engender trust that starred a guy who played a master thief in a once well-known but now somewhat glossed over entry in the 1960's spy craze, namely IT TAKES A THIEF (1968-1970)?

Wagner played Alexander Mundy, the world's greatest thief, who, once apprehended, was pressed into service by the fictional SIA organization to steal for the US government (in the interest of protecting the country's interests of course). Al's international adventures were chronicled over three seasons and were greatly entertaining, still holding up some four decades after the fact and amounting to what was in my opinion the finest of the American spy shows from that period (there are those who consider THE MAN FROM U.N.C.L.E. as the gold standard for such things, but I doubt they've seen it for a while; the first season was very good and quite imaginative, but after that...). 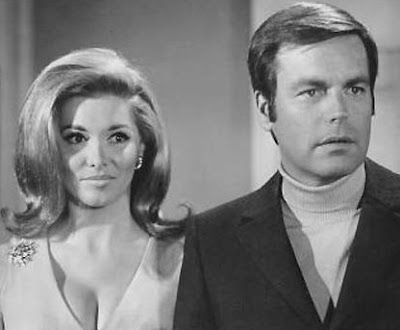 Robert Wagner back in the days.
Yeah, yeah, I know that he's an actor and all that, but the TV-viewing public has a long memory and in some cases tends to think of the actor in question as the character they played, so I would have ruled Wagner as a questionable choice for the mortage gig. But then again, I hadn't seen IT TAKES A THIEF since I was very little, yet remembering it fondly and only recently rediscovering it thanks to DVDs acquired through the collector's gray market, so what the fuck do I know? Nonetheless, I find Wagner hilarious in this capacity. I mean, would you buy any kind of mortgage, reverse or otherwise, if it was being shilled by Ernst Stavro Blofeld? 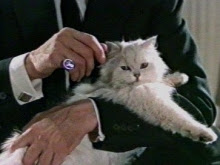 "Yes, Mister Bond, I am now in the business of selling reverse mortgages. And I expect you to buy!"
Posted by Bunche (pop culture ronin) at Sunday, January 06, 2008

Gee, Steve, I loved It Takes A Thief-- in fact just found a trove of clips on YouTube literally over the weekend. I was reminded that seeing that little pocket kit of tools is what started me on my road to crime. As soon as I could afford to assemble one of those, I did. I think I was 11 or 12 and the damned thing fell apart in a couple of years. This was well before Swiss Army Knives appeared on the US horizon. And who could afford one of those? I used an old woman's nail trimming kit.
I think it's more funny to see Wagner with such a face-splitting grin-- that's what's off-putting. He never smiled that hard in his life-- even when chortling for Dr. Evil, he did it with his mouth half-open.