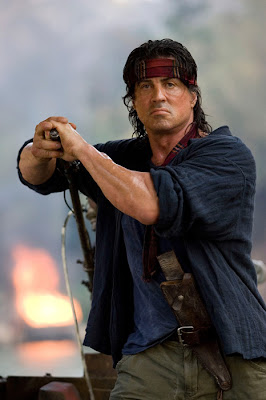 So I’ve seen the new Rambo flick, and it’s quite different from what I expected.

Twenty years after his Afghanistan adventure in RAMBO III, Rambo’s old, bloated, and hanging around in Thailand, eking out a living catching enormous cobras. This idyllic existence is interrupted when a bunch of Christian missionaries and doctors show up and ask him to take them upriver into Burma — read “Myanmar” —, where an evil warlord is driving around the place blowing up villages, allowing his soldiers to violate and dismember innocent people, and enslaving boys for his army (and his creepy pedophilic lusts). Rambo refuses their request. Think about it: the guy’s a killing machine who survived unspeakable shit in Viet Nam, and even he won’t go to Burma, so what does that tell you? But even Rambo’s resolve can be swayed by the mystical power of pussy, so the dumbass takes this squad of suicidal morons on their journey after exchanging some incomprehensible and slurred “deep” dialogue with a blonde missionary (Julie Benz, better know as Darla from TV's BUFFY THE VAMPIRE SLAYER and ANGEL).

The wannabe-APOCALYPSE NOW river journey moves like molasses on a cold day, and the audience is roused back to attention by a brief bit involving Burmese river pirates getting offed by Rambo. After witnessing the slaughter, the head missionary launches into the predictable “violence is never justified” speech, solely so we can see him eat his words later in the story, after which Rambo dumps them at their destination and fucks off for home. But then surprise, surprise, the missionaries end up in the hands of the sadistic bad guys and Rambo is called in by some official-type guy to guide a team of mercenaries to where he dropped off the missionary idiots. That narrative move once more forces us along for a boring river journey, but this second trip is at least spiced up with a bunch of mercenaries straight out of central casting and ostensibly lead by a bald Brit whose over-the-top “hard” histrionics and accent caused the opening night audience to erupt with laughter the second he opened his mouth, his semi-paraphrasing of Robert DeNiro’s “You talkin’ ta me?” bit from TAXI DRIVER being a particular crowd-pleaser.

Oh, and did I mention that before this epic voyage gets underway Rambo brings the proceedings to a dead halt by stopping to hand-forge a sword/machete?

When Rambo and the lads finally arrive, the mercenaries reject our hero’s intent to aid them, spurning him and his folded compound bow, so of course they immediately run into some of the bad guys and Rambo comes to the rescue, handing out arrows through the head like Halloween candy. Usurping the leadership role, Rambo leads the mercs into the enemy stronghold where they rescue the missionaries — while the bulk of the Burmese villains take part in a rave-as-prelude-to-gang-rape-of-native-girls, complete with purple smoke grenades for ambience, and their leader pooches an underage boy — and make their way back to the boat, just a wee bit ahead of heavily armed pursuers. It all ends in an ultra-violent firefight in which the head missionary kills a guy with a rock, thereby learning that violence can indeed by justified and proving once and for all that foreshadowing is a bitch. THE END.

This all may sound like a typical Rambo outing, but it’s significantly different from its predecessors in its listlessness when the violence isn’t occurring. Back in the days when he wasn’t seventy-five years old Stallone could provide entertainment just by standing there, keeping the audience’s attention with endless shots of his ripped-to-the-point-of-being-disturbing physique, but now he’s draped in a shapeless caftan and meanders from scene to scene like he’s half-asleep. And if I had to endure one more closeup of his hungover bloodhound stare and pursed lips…

The lack of “Yoo-Ess-Ay” jingoism was refreshing, but it was tough to give a fuck about the missionaries because they were just so balls-out stupid, proceeding upriver despite witnessing Rambo kill a boatload of pirates who intended them all manner of harm, as well as knowing full well they’re wandering into a hell on earth. Altruism is great, but there comes a point when the self-preservation instinct overrides one’s desire to preach the gospel while having a bayonet shoved through one’s forehead.

Which brings me to the gore.

I love ultra-violent, gory entertainment. I always have, but I was genuinely shocked by just how totally out of control the carnage on display in RAMBO was, a display of exploding bodies, dismemberments, beheadings, people being blasted into chopped meat by heavy artillery, rape (thankfully not as graphic as it could have been), murder of children, and literal showers of offal. Usually these elements are part and parcel for acton/exploitation films, but thanks to how tight the MPAA has kept the reigns on such content I have to admit I wasn’t ready for it. I’d liken it to a fusion of the most excessive moments of SAVING PRIVATE RYAN and SOLDIER BLUE , with a drop of APOCALYPSE NOW-style acid surrealism, and if the audience’s giddy, giggling response to it is any indication I’d say that it’s just what they were looking for.

The audience I saw it with was composed largely of twenty-somethings who’d grown up with repeated airings of Rambo movies on cable, VHS or DVD, and engaged in their own shoot ‘em up fantasies with video games, and as such they reacted to the carnage with the glee one sees while watching someone impressively rack up point after point on an arcade shooter game. While the previous Rambo movies admittedly trivialized war into entertainment, those films date back twenty years; the public’s access to graphic violence now includes simulated digital battlefields of myriad types that allow the user to, in effect, be armchair Rambos and rain grisly devastation upon their CG foes. That’s all well and good — better that than those same people getting their hands on firearms and shooting up high schools — but the audience’s reaction to the violence made me question just how desensitized the moviegoing public has become, and it certainly isn’t due to a surfeit of Hollywood-produced, hyper-violent movies. Sure, there are the SAW torture porn flicks, but those are the exception rather than the rule, and even action films, once the genre absolutely guaranteed to provide vicious mayhem, have pussied out in pursuit of the potentially more lucrative PG-13 dollar (just look at the last DIE HARD movie to see what I mean). And even R-rated action films seem far more tame than what was allowed to rampage across the screen from the early 1970’s through the early 1990’s, with only rare exceptions like STARSHIP TROOPERS (1997) and KILL BILL VOL. 1 (2003) keeping hope alive. So if you’re not too discriminating when it comes to such considerations as a decent script, brisk pacing, believable characters — or characters at all — some kind of point to all of it, RAMBO provides a concentrated blast of outright carnage that is quite dazzling in its sheer gratuity and bloodshed.

But the thing that most got to me about all of this was the number of parents who brought their very little kids to see RAMBO. I long ago realized that I’d be a rather lenient parent when it came to what I would allow my theoretical kids to see, having seen R-rated fare since I was six years old and turning out relatively okay, but in now way would I have brought any kid under twelve to see this one. Which is why it broke my heart to see an adorable little girl of perhaps four on line with her folks. When the film ended I noticed the kid and her parents had been seated a few rows in back of myself and Suzi, and after witnessing the hour-and-a-half of slaughter and the audience’s laughter at it, the adorable child held her father’s hand and observed, “That was a funny movie, daddy!”

Make of that what you will.
Posted by Bunche (pop culture ronin) at Sunday, January 27, 2008

That little girl will join the army some day to defend our american way of life the next time we plunder, er democratize another third world nation. And the 'american people' will consider her a hero.

That little girl's comment is, to me, more disturbing than any of the onscreen mayhem.
This illustrates why there is such an innate streak of remorselessness, or just plain cruelty, in todays youth. In todays society in general, as a matter of fact.
And I am a fan of this type of cinematic violence! So, I guess I'm, passively at least, part of the problem.

"My grampa can kill your grampa!"

While missionaries certainly have HUGE streaks of altruism, it's merely a by-product of the mission at hand. Spreading the Gospel. And many missionaries have the same thought patterns of other major religions: "If I die serving my God...even better"

Missionaries today face those EXACT same 'adventures'--the death reports of missionaries in 3rd world countries are staggering. I know first hand, because every couple of months our church gets some notice that either people we directly or indirectly support have been locked-up, tortured or killed for their faith.

Altruism certainly plays a part. It's basic ethics. But missionaries do this because they believe something MUCH bigger than simple altruism.

Go Rambo! Save the missionaries!
Bwa ha ha! I HAVE to see this now!