ON THE SIDEWALKS OF NEW YORK: FUN WITH THE DECEASED

Man, I love this city! From today's Daily News: 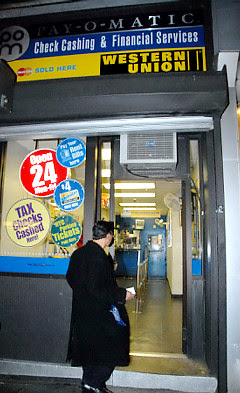 Life imitated the movies Tuesday when two dopes wheeled a dead man around Hell's Kitchen in an office chair as they tried to cash his Social Security check, cops said. The "Weekend at Bernie's" stunt was an attempt to collect 66-year-old Virgilio Cintron's dough less than a day after he died, police said. One suspect is Cintron's roommate.

"They didn't kill the guy. He died of natural causes. But they were all about not letting the situation go to waste," a police source said. "'How are we going to cash it? Let's bring him with us.' They must watch too many movies."

The roommate, James O'Hare, and his pal David Dalaia attempted to dress Cintron's corpse in a pair of pants, a T-shirt and sneakers, police said. When they couldn't get the pants to his waist, the 65-year-old men threw a jacket over his crotch and wheeled him from his W.52nd St. apartment to a check-cashing outlet around the block on Ninth Ave., police said. "Witnesses observed Mr. Cintron flopping from side to side and these individuals propping him up as they rolled along," said NYPD spokesman Paul Browne.

The men left Cintron's body outside while they went into Pay-O-Matic, where Cintron always cashed his checks, police said.
An employee recognized the name on the $355 check, and when he asked to see Cintron, O'Hare said, "He's outside. We'll get him," according to police. "They were trying to pass the guy off as alive," Pay-O-Matic clerk Mariano Galvez told the Daily News. "They just left the body in the chair outside." The casual corpse on the sidewalk at 3:45p.m. drew a large crowd, including an on-duty detective who was eating lunch at a restaurant next-door. He reported the incident and called the Emergency Medical Service. As O'Hare went to get Cintron, an ambulance arrived to cart his remains off to the morgue, police said. Moments later, O'Hare and Dalaia were taken to the Midtown North stationhouse, where last night police were preparing to charge them with check fraud.

A neighbor of the roommates, Jeff Bell, 51, said the pair had lived together for years and that Cintron had Alzheimer's disease.

In 1989's "Bernie" flick, two young pals cart their dead boss around, successfully passing him off as alive. 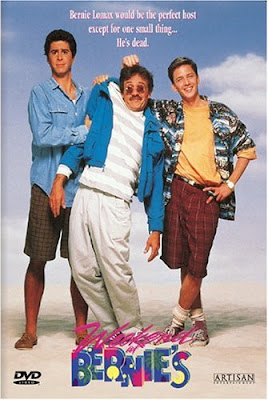