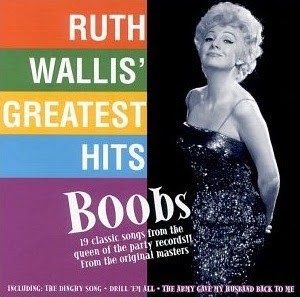 Back in the days there used to be a genre called "party records," slabs of vinyl intended for play at grownup parties — "smokers" as they were then called — that featured jokes by "blue" comedians like Red Foxx and Pigmeat markham, extended bits like the infamous "Farting Contest," and songs of a questionable nature by pioneering chanteueses Rusty Warren and Ruth Wallis (pioneering for white chicks, that is). Of these two broads Rusty Warren was by far the raunchier of the two, coming off like an even more boisterous fusion of Roseanne and Ethel Merman, but the sweet-voiced Ruth Wallis was easily the funnier of the two. She had a tone like some dreamy-eyed fairytale narrator, but her material could often make a listener do a double-take. I first heard her when, at the age of eight, I stole one of my parents' albums and delighted in "The Dinghy Song" ("Of all the dinghys that sail the sea/Davey's is the only one for me!"). From today's New York Times:

Ruth Wallis, a cabaret singer of the 1940s, ’50s and ’60s who was known as the Queen of the Party Song for the genteelly risqué numbers she performed for happy, and very occasionally horrified, listeners worldwide, died on Dec. 22 at her home in South Killingly, Conn. She was 87. The cause was complications of Alzheimer’s disease, her son, Alan Pastman, said.

Ms. Wallis, who began her career performing jazz and cabaret standards, soon became known for the novelty songs — more than 150 of them — she wrote herself, all positively dripping with double entendre. Even today, only a fraction of her titles can be rendered in a family newspaper, among them “The Hawaiian Lei Song,” “Hopalong Chastity,” “Your Daddy Was a Soldier” and “A Man, a Mink, and a Million Pink and Purple Pills.” Her signature number, “The Dinghy Song,” is an ode to Davy, who had “the cutest little dinghy in the Navy.”

In 2003, Ms. Wallis’s work was the basis of an off-Broadway revue, “Boobs! The Musical: The World According to Ruth Wallis.”

Though Ms. Wallis performed in some of the most glittering nightclubs in New York, Las Vegas, Los Angeles and elsewhere, her career was largely overlooked at the time. Few mainstream newspapers, after all, dared print even faintly suggestive titles like “Johnny Has a Yo-Yo,” “De Gay Young Lad,” “Stay Out of My Pantry” and “Don’t Bite Off More Than You Can Chew.” Nor could they reproduce Ms. Wallis’s lyrics, in which body parts, real or merely implied, tended to loom large.

In Boston, Ms. Wallis’s songs were banned from the radio. In Australia, her records were seized by customs agents when she arrived there for a tour. Both incidents only made her more popular, according to later news accounts.

Ruth Shirley Wohl was born in New York City on Jan. 5, 1920. She chose her stage name in honor of Wallis Warfield Simpson, the Duchess of Windsor, her son said.

Ms. Wallis’s marriage to her manager, Hy Pastman, ended in divorce, though they were later reconciled, her son said; the elder Mr. Pastman died in 1987. Besides her son, of South Killingly, she is survived by a daughter, Ronnie Ramistella of Monterey, Calif.; and one grandchild.