SOUND & FURY: AT LAST! THE LYRICS TO "PARALYZED" REVEALED 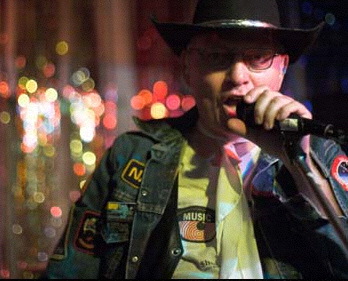 Still feeling the love for the Legendary Stardust Cowboy after writing about him yesterday, I felt it would be beneficial to mankind if I posted the lyrics to his immortal “Paralyzed,” a song better than anything ever recorded by Elvis or the Beatles. But imagine my surprise when I tried to locate the lyrics online and came up with nothing. This is the Internet, for fuck’s sake, a vast landscape where the intrepid web-surfer can find anything from people in stuffed animal costumes literally fucking the living shit out of each other while slathering their genitals with tile caulk, to actual YouTube video of the Pope performing female circumcision on Margaret Thatcher, so how was it possible that the lyrics to one of the weirdest recordings ever made were nowhere to be found?

Fortunately I have a copy of Irwin Chusid’s book SONGS IN THE KEY OF Z: THE CURIOUS WORLD OF OUTSIDER MUSIC (2000, A Capella Books), an invaluable tome that gives a fascinating overview of the fringiest of fringe music and includes a comprehensive chapter of the Legendary Stardust Cowboy. That informative section also includes the lyrics to “Paralyzed,” so I have transcribed them and now present them for your edification. But a word of warning: don’t try to read them along with the audio because the Ledge’s impassioned vocals are just too much to be constrained by concepts such as rhythm, timing, or coherence. I had much the same experience when I attempted to read along with the original version of the Bad Brains’ “Pay To Cum,” and while it was nice to know what was being sung it in no way added to my enjoyment of that warp-speed favorite. The same can be said for “Paralyzed,” in fact I feel the lyrics are almost totally irrelevant since the song is pretty much an explosion of raw, animalistic emotion.

I’ve got a gal, away ‘cross town
She won’t come to see me unless I pull my shades down
Paralyzed, paralyzed
She puts her arms around me, the way she squeezes me
Makes me paralyzed

When I go to the show
Boy, she does make a fellow bestow [sic]
Paralyzed, paralyzed
When I look into her eyes, she makes me paralyzed

I threw my baby in a sack
Threw it over my back
And took off in a big black Cadillac
Paralyzed, paralyzed
She puts her arms around me
She keeps me warm from the storm
She makes me paralyzed

I ran to the ‘frigerator
Hungry as an alligator
I opened the door, and what did I see?
I saw my baby starin’ right back at me
Paralyzed, paralyzed

She jumped into my arms
She gave me all of her charms
She makes me paralyzed
Posted by Bunche (pop culture ronin) at Tuesday, January 08, 2008

Thanks for turning me onto this-

The Ledge was apparently one of Bowie's inspirations for Ziggy Stardust. Make of that what you will...

thank you for this, man, i appreciate it... i think i'm gonna record a cover of the song on my next album