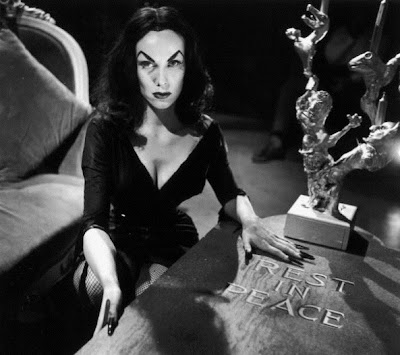 Black dress moves in a blue movie
Graverobbers from outer space
Well, your pulmonary trembles in your outstretched arm
Tremble so wicked

Mistress to the horror kid
Cemetary of the white love ghoul, well
Take off your shabby dress
Come and lay beside me

There are certain figures who are inextricably linked to the old school horror genre, specifically the cinema of chills and mood before it became all about the gore. Bela Lugosi and Boris Karloff spring instantly to mind, their images looming large over the 1930's and 1940's, but the horror icon whose visage virtually screamed "1950's" was the wasp-waisted Maila Nurmi, better known to the faithfull as Vampira. First gaining notoriety as a horror host, Nurmi gained screen immortality in what is considered by many to be the worst film ever made — an unfair assessment that should go to MANOS: THE HANDS OF FATE (1966) — namely Ed Wood's in famous PLAN 9 FROM OUTER SPACE (1959). Her aesthetic owed much to Charles Addams cartoons and she came off as sort of an undead Betty Page, providing a fashion Rosetta Stone for Goth chicks some five decades after the fact. Nurmi even tried to sue Cassandra Peterson for ripping off her schtick to create Elvira, Mistress of the Dark, but to no avail. (I can see her point but I also think there may have been a tad of jealousy motivating that lawsuit; face it, horror kiddies, Elvira was and still is a righteously hot piece of graveyard ass!)

And now Nurmi resides in the sepulchral landscape that she so often frequented back in the days.

Maila Nurmi (born Maila Elizabeth Syrjäniemi) (December 21, 1921 – January 10, 2008) created the well-remembered 1950s character of Vampira. Her portrayal of this character as a television horror host and in films was influential over decades that followed.

EARLY LIFE
Born Maila Syrjäniemi, she claimed to be the niece of the Finnish athlete Paavo Nurmi, who began setting long-distance running world records in 1921, the year of her birth. She moved to the United States with her family when she was two years old and grew up in Ashtabula, Ohio, home to the largest Finnish-American community in Ohio. Arriving in Los Angeles at age 17, she modeled for Alberto Vargas, Bernard of Hollywood, and Man Ray, gaining a foothold in the film industry with an uncredited role in Victor Saville's 1947 film, If Winter Comes. Like many struggling actresses in the 1950s, Nurmi (along with Julie Newmar, Tina Louise, et al.) posed for pin-up photos in dozens of men's magazines such as Famous Models, Gala and Glamorous Models.

ORIGIN OF VAMPIRA
The idea for the Vampira character was born in 1953 when Nurmi attended choreographer Lester Horton's annual Bal Caribe Masquerade in a costume inspired by a character in The New Yorker cartoons of Charles Addams. Her appearance with pale white skin and tight black dress caught the attention of television producer Hunt Stromberg, Jr., who wanted to hire her to host horror movies on the Los Angeles television station KABC-TV, but Stromberg had no idea how to contact her. He finally got her phone number from Rudi Gernreich, later famed as the designer of the topless swimsuit. The name Vampira was the invention of Nurmi's husband, Dean Riesner (1918-2002), screenwriter of Dirty Harry, Charley Varrick, Play Misty For Me and numerous other movies and TV episodes.

On Friday night, April 30, 1954, KABC-TV aired a preview, Dig Me Later, Vampira, at 11:00 p.m. The Vampira Show premiered on the following night, May 1, 1954. For the first four weeks, the show aired at midnight, moving to to 11:00 p.m. on May 29. Ten months later, the series aired at 10:30 p.m., beginning March 5, 1955. As Vampira, Nurmi introduced films while wandering through a hallway of mist and cobwebs. Her horror-related comedy antics included talking to her pet spider Rollo, and encouraging viewers to write for epitaphs instead of autographs. When the series was cancelled in 1955, she retained rights to the character of Vampira and took the show to KHJ-TV 9. A single kinescope of Nurmi in character advertising the station's ability to draw customers for advertisers and several episode scripts are held by private collectors.

Nurmi made television history as the first horror movie hostess. In the years that followed, Universal Studios released a syndicated package of 52 horror classics under the program title Shock Theater. Independent stations in major cities all over the U.S. began showing these films, adding their own ghoulish host or hostess (including Vampira II and other lookalikes) to attract more viewers. This trend flourished over the next few decades, culminating in the 1980s with Cassandra Peterson's sexy Elvira, Mistress of the Dark character.

Nominated for an Emmy Award as "Most Outstanding Female Personality" in 1954, she returned to films with 1955's Too Much, Too Soon, followed by The Big Operator and The Beat Generation. Her most notable film appearance was in Ed Wood's camp classic, Plan 9 from Outer Space, as a Vampira-like zombie (filmed in 1956, released in 1959). In 1960, she appeared in I Passed for White and Sex Kittens Go to College, followed by the 1962 film, The Magic Sword. (See Filmfax no. 13, December 1988 for more on Vampira.)

PERSONAL LIFE
Nurmi was acquainted with Marilyn Monroe, Elvis Presley, and briefly dated Orson Welles. In the early 1950s, she was close friends with James Dean, and they hung out together at Googie's coffee shop on the corner of Crescent Heights and Sunset Boulevard in Hollywood. Her explanation for their friendship: "We have the same neuroses." Dean commented, "I have a fairly adequate knowledge of satanic forces, and I was interested to find out if this girl was obsessed with such a force."

LATER LIFE
In the early 1970s, Nurmi opened "Vampira's Attic", an antiques store in her home on Melrose Avenue. She also sold handmade jewelry and clothing. She made items for several celebrities including Grace Slick of the music group Jefferson Airplane and the Zappa family. In the 1980s, Nurmi was asked by KHJ-TV to revive her Vampira character for television. She worked closely with the producers of the new show and was to get an executive producer credit, but Nurmi eventually declined their proposal. KHJ-TV continued with the show and changed the name of their character to Elvira. Later, Nurmi sued Cassandra Peterson, the actress who played Elvira. The case was dismissed when Nurmi was unable to pay for legal expenses. In 1994, Maila Nurmi was portrayed by actress-model Lisa Marie in Tim Burton's Ed Wood, and she was the subject of a 1995 Finnish documentary, About Death, Sex and Taxes by Mika J. Ripatti. Her last film role was in 1998's, I Woke Up Early the Day I Died.

In 2000, Image Entertainment released Plan 9 from Outer Space on DVD. The disc contains a bonus two-hour documentary Flying Saucers Over Hollywood: The Plan 9 Companion with extensive interviews with Nurmi and other cast members.

In 2001, Nurmi opened her official website http://www.vampirasattic.com, and began selling autographed memorabilia and original pieces of art on eBay. Until her death, Nurmi lived with her pets in a small North Hollywood apartment. Unlike Elvira, Nurmi authorized very few merchandising contracts for her Vampira character, though the name and likeness has been used unofficially by various companies since the 1950s. In the 1990s, Nurmi authorized a Vampira model kit and figurine, and in 2004, she authorized merchandising of the Vampira character by Coffin Case.

In 2000, Nurmi was featured alongside cult filmmakers Roger Corman, Doris Wishman, David F. Friedman and others in Ray Greene's documentary Schlock! The Secret History of American Movies, about the American exploitation films of the 1950s and 1960s. In 2006, Nurmi was interviewed for American Scary, a documentary about local late-night horror movie hosts. In 2006, Nurmi was the subject of another documentary called Vampira: The Movie. The documentary, directed by Kevin Sean Michaels, featured interviews with Maila Nurmi herself, with numerous horror stars about Vampira, and with Cassandra Peterson about the Elvira lawsuit.

AWARDS
She was inducted into the Monster Kid Hall of Fame at the Rondo Hatton Classic Horror Awards. 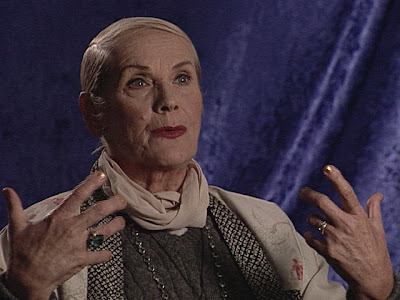