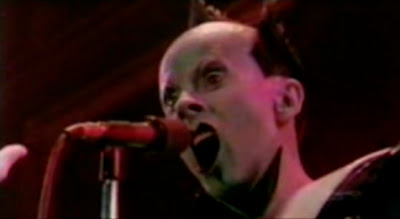 I love weird. I love music. I love weird music. So it should come as absolutely no surprise to anyone that I love Klaus Nomi.

Yeah, yeah, I know. You probably have no idea who the fuck Klaus Nomi is and are wondering why this post is wishing a happy birthday to a guy (?) who looks like the Joker's queer baby brother. Well, lemme tell ya that Klaus was a singer for whom the word "unique" was coined, seeing as he was a short, gay Kraut who dressed like an androgynous Astro-Boy and could belt out operatic arias that would have made Luciano Pavorotti exclaim "Mama mia motherfuck!!!" Like some curious space alien freshly landed upon our green Earth from a distant galaxy, Nomi somehow managed to out-strange virtually every other whack job on the rock 'n' roll stage at the time; no mean feat considering that he emerged during the tail end of glam and the emergence of "new wave," a period that witnessed such acts as the B-52's, Skafish, the pre-"Whipit" Devo (when they were still balls out gonzo and not a dance music band), and the still bizarre David Bowie (around his "The Lodger" and "Scary Monsters" period, and just before he bottomed out with horseshit like "Let's Dance" and "China Girl").

Nomi's persona thoroughly embraced the "different," and despite his extraterrestrial appearance and chitinous tuxedo apparel he came off to me as nowhere near as affected as some of his contemporaries. Sure his movements were fey/robotic and his falsetto was just a notch shy of being considered a deadly weapon, but his theatrics were melded with heartfelt covers of old standards — one of the mainstays of the gay cabaret scene — in such a way as to make chestnuts like "The Twist," "You Don't Own Me," and "Ding Dong (The Witch Is Dead)" fresh and disturbingly cutting edge. His music was definitely not for all tastes, but those who took the time to give it a chance and make it past the initial shock were rewarded with one of the most beautiful of the post-punk era's musical experiences. In short: if you were a bit of an outsider, so was Klaus. And there you found common ground.

Klaus Nomi totally kicked my ass when I heard the live recording of his "Total Eclipse" on the URGH! A MUSIC WAR soundtrack when I was sixteen, a feat only compounded when I finally saw the elusive rockumentary while out of my mind on "jug-o-wine" (as some of my university compatriots dubbed it) when it ran on the USA Network's late, lamented NIGHT FLIGHT in 1986. And I know I'm not alone. How else could you explain Nomi turning up quite recently as a sonically-powered animated super-villain named "Klaus" on THE VENTURE BROTHERS, with a shirtless Iggy Pop along for the ride? 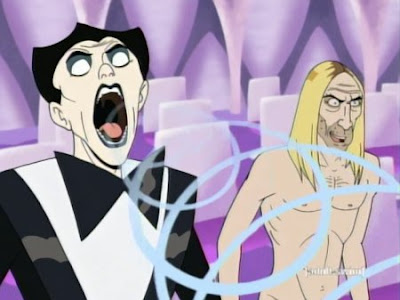 So I would like to wish Klaus Nomi a very happy sixty-fourth birthday — despite him no longer being with us thanks to his untimely AIDS-related demise — and thank him for adding a bright spot into the life of a miserable teenager, some twenty-seven years past. By way of remembrance I just checked out the footage of his performances of "Total Eclipse" and "Nomi Song" on YouTube, and I urge you to do likewise and be prepared to scratch your head.

And here's the whole story on Herr Nomi from the Wikipedia:

PERSONAL LIFE
Nomi was born Klaus Sperber in Immenstadt, Germany. His birthday is commonly observed as January 24, 1944. In his youth in the 1960s, he worked as an usher at the Deutsche Oper in West Berlin where he would sing on stage in front of the fire curtain after the shows for the other ushers and maintenance crew. Around that time he also sang operatic arias at a Berlin gay club called Kleist Casino. Nomi moved from Germany to New York City in the mid-1970s. He began his involvement with the art scene based in the East Village. According to Horn's documentary film, Nomi took singing lessons and supported himself working as a pastry chef.

Nomi died on August 6, 1983 in New York City, one of the first celebrities to die of an illness complicated by AIDS. His ashes were scattered over New York City.

CAREER
While he appeared in a satirical camp production of Richard Wagner's Das Rheingold with Charles Ludlam's Ridiculous Theater Company in 1972 ("Art After Midnight: The East Village Scene" by Steven Hager; 1986 St. Martin's Press), Klaus Nomi first came to the attention of New York City's art scene in 1978 with his performance in "New Wave Vaudeville", a four-night event MC'd by artist David McDermott. Klaus sang the aria Mon coeur s'ouvre a ta voix ("My heart opens to your voice") from Camille Saint-Saëns' 1877 opera Samson et Dalila, dressed in skin tight space suit with a clear plastic cape. His performance ended with a chaotic crash of strobe lights, smoke bombs, and loud electronic sound effects with Klaus backing away into the smoke. To quote Joey Arias, who was at the performance, "I still get goose pimples when I think about it... It was like he was from a different planet and his parents were calling him home. When the smoke cleared, he was gone." The reaction was so overwhelmingly positive that he was invited to perform at clubs all over New York City. He assembled a group of then up-and-coming artists around him which at times included Joey Arias, Jean-Michel Basquiat, Keith Haring, John McLaughlin (who also used the pseudonym "Johnny Sex") and Kenny Scharf.

David Bowie had been hearing about Nomi's performances in NYC and after meeting him and Joey Arias at the Mudd Club one night, he hired them as performers and back-up singers for his appearance on Saturday Night Live which aired on December 15, 1979. Nomi also collaborated with producer Man Parrish. The 1981 rock documentary film, Urgh! A Music War features Nomi's live performance of Total Eclipse.

INFLUENCE AND CULTURAL SIGNIFICANCE
Filmmakers like Andrew Horn and writers like Jim Fouratt consider Nomi an important part of the 1980s East Village scene, which was a hotbed of development for punk rock, music, the visual arts, and the avant-garde. Although Nomi's work had not yet met with national commercial success at the time of his death, he garnered a cult following, mainly in New York and in France.

Andrew Horn's 2004 feature documentary about Nomi's life The Nomi Song released on Palm Pictures helped spur renewed interest in the singer, including an art exhibit in San Francisco at the New Langton gallery.

Nomi's influence can also be measured by references and homages to him in the work of later artists. British pop icon Morrissey used the song "Wayward Sisters"* as an introduction prior to appearing on stage to begin a concert for his Kill Uncle tour. He used the song "After the Fall" for the same purpose during his 2007 American tour. Morrissey included Nomi's song "Death" in his compilation of influential songs titled "Under the Influence". Austrian composer Olga Neuwirth wrote a "Hommage à Klaus Nomi" for countertenor and chamber ensemble. A fictionalised version of Klaus Nomi appears in a two-part episode of animated comedy/adventure series The Venture Bros. In "Showdown at Cremation Creek (Part I)," he appears as one of David Bowie's bodyguard henchmen (alongside an animated Iggy Pop, another Bowie collaborator). "Klaus" attacks his opponents with ultra-high-pitched singing and the over-sized bow tie of his famous costume, spun and ejected as a battering weapon. In "Showdown at Cremation Creek (Part II)," "Klaus" seems to have been killed after betraying Bowie in order to become a henchman of a villain known as The Phantom Limb.

Nomi's flamboyant cover of Lesley Gore's 1964 hit "You Don't Own Me" with a thick German accent is sometimes featured on The Rush Limbaugh Show as the Gay Update Theme. This was done after Gore's original was for a time adopted as the Feminist Update. Nomi does not change the gender (e.g. "Don't say I can't play with other boys").
Posted by Bunche (pop culture ronin) at Thursday, January 24, 2008

>mean feat considering that he emerged during the tail end of glam and the emergence of "new wave," a period that witnessed such acts as the B-52's, Skafish, the pre-"Whipit" Devo (when they were still balls out gonzo and not a dance music band), and the still bizarre David Bowie

Oh, great, now I'm going to have "Total Eclipse" going through my head for the rest of the day. DAMN YOU BUNCHE!

Dude! Some one else who got who Klaus Nomi was in that episode!!!!
Man i love the venture bros. Every episode seriously has me on the verge of an epileptic fit with laughter. I heard that laughter massages your internal organs, and that its good for you from some hippie. The venture bros. definitely been laying some hands on my viscera. the "ghosts of the sargasso" episode is by far the funniest episode, with the intro a 1950's superscientist novel visual retelling of Bowie's space oddysee, followed by brock samson killing a pirate with his (the pirate's) hand up his (Brock's) ass. oh man. i got to go in the bathroom so i can smile and not get in trouble for surfing on the companies time. Thanks bunch!

So you're going to just steal this content from wikipedia and http://www.psychotica.net/evb/nomi/scene.html without even bothering to post a credit link?

He did put credit for his sources you retard!