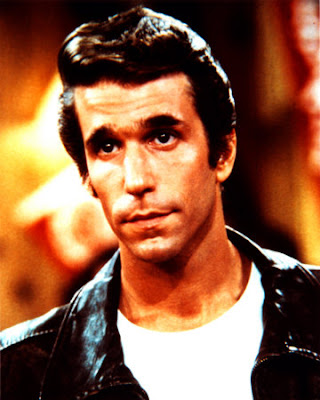 All I have to say on this one is that if the Fonz is getting a statue, I demand a thirty-foot marble likeness of Captain Kirk be erected in Iowa. From the Associated Press:

Fonzie to Get Bronze Statue in Milwaukee
By CARRIE ANTLFINGER

MILWAUKEE (AP) — Aaaaaaay! The ultra-cool Arthur "Fonzie" Fonzarelli is coming to Milwaukee — permanently. A bronze statue of the leather-jacketed biker from "Happy Days" will be erected in Milwaukee, where the TV sitcom was set, now that local groups have raised the $85,000 needed to do it.

"Holy mackerel!" said actor Henry Winkler, who played Fonzie during the show's run from 1974 to 1984, when he first heard about the effort to immortalize the character. "The second thing that hit me was, 'What a phenomenal compliment,'" he told The Associated Press in a phone interview this week from his home in California. "I mean it's not often you have a dream when you're 7 lying in your bed, you get to live your dream out and then someone is going to erect a life-size statue of your creation. "I don't take it lightly, that's for sure."

Winkler planned to be in Milwaukee Friday morning for the announcement that money needed for the project has been raised.

Dave Fantle, spokesman for VISIT Milwaukee, which markets the area, said the idea for the statue came from his group and Spirit Milwaukee, a civic booster group, about a year ago. They had learned that the TV Land icon statue program was planning a statue of Fonzie and soon learned it was interested in putting it in Milwaukee. The effort was responsible for a Mary Tyler Moore statue in Minneapolis and one of Bob Newhart in Chicago, among others, but the cable network later ended the program. So the two Milwaukee groups took it upon themselves to get donors who gave $2,000 or more, including TV Land, to raise more than $85,000. In addition, funds were raised from nearly 300 T-shirts and "Bronze the Fonz" thumbs-up cookies sold at a Jefferson, Wis., bakery.

Steven Palchinski, 22, of Martensville, Saskatchewan in Canada, said he would like to take a trip to Milwaukee to see the Fonz statue. He said he's been watching "Happy Days" since the early 1990s and liked how the show used Fonz to help prompt kids to read or show emotion. In one episode Richie Cunningham almost dies in a bike accident and the Fonz started to cry at his bedside. "This was put in because some teachers wanted to show their autistic students that emotion was OK and they used the Fonz in all his ... awesomeness to prove that to them," Palchinski said in an e-mail. "It was sheer genius in my opinion."

In November, he even started a group on the social networking site Facebook called "Bronze the Fonz." It has four members so far and Palchinski expects to get more soon.

Beauty, or in this place cool, is in the eye of the beholder. Mike Brenner, who started Hotcakes Gallery four years ago, said the statue — which he called a monstrosity — was originally billed as art but after some in the art community complained, it was called a "trinket." He plans to close his gallery permanently, partly because of the statue. Brenner already wasn't doing well financially and blames it on the lack of local interest in the arts and city leaders' lack of vision. The few pieces of public art in the city are poorly maintained, Brenner said. He said he wouldn't have a problem with the statue if city leaders did more to promote the local arts. The statue perpetuates the perception that Wisconsin doesn't have more to offer than the Packers, serial killer Jeffery Dahmer and the show "Happy Days," Brenner said. "Can we just try to move forward, a little bit?" he said. "It's a publicity stunt that has dramatic effects about our perception."

Winkler said everyone has a right to his or her own opinion. He personally loves the Fonz. "He introduced me to the world," Winkler said. "He put a roof over my head. He put my children through college. He was fun to play and he introduced me to a second family who I love to this day."

Fantle said he's spoken with Brenner and another disenchanted gallery owner and hopes everyone can "live harmoniously with the Fonz." "We can either run and hide from our traditions — beer, brat, fish fries, custard, "Happy Days," etc. or realize that they all embody good times and we should celebrate this," Fantle said in an e-mail.

Plans call for dedicating the statue around Labor Day, which coincides with Harley-Davidson Inc.'s 105th anniversary celebration. That's set for Aug. 28-31. An exact spot hasn't been chosen, but it will likely be along the Milwaukee River.

You're just upset because the Fonz could kick Rambo's ass!

I hear there are plans for a statue of Chachi in Bensonhurst.

Interestingly enough, Chuck (the long abandoned older brother of Richie Cunningham) is lobbying to have the statue erected at his palatial estate in eastern Milwaukee.

And without as much fanfare, the Anson "Potsie" Williams statue slated for South Central Los Angeles will be dedicated in early March. Mark your calendars!!!