SOUND AND FURY: A TREASURE ACQUIRED (and sort of explained)

One of these days, when I finally get it together enough to afford a decent-sized living space, I intend to have a corner devoted to an honest-to-the-gods old school jukebox, stocked with vinyl only and none of that MP3 bullshit. I already have a few hundred 45's — remember them? — at the ready, and my jukebox will be stuffed to the proverbial gills with as many non-hits as I can muster, a taste (?) choice certain to irritate the living hell out of whatever woman I'm lucky enough to end up with. That said, I just acquired one of the holy grails of my vinyl search thanks to eBay, and for the mere pittance of $10.25, including postage and handling. That sacred sliver of obsolete black plastic is none other then the Legendary Stardust Cowboy's 1968 masterpiece "Paralyzed." 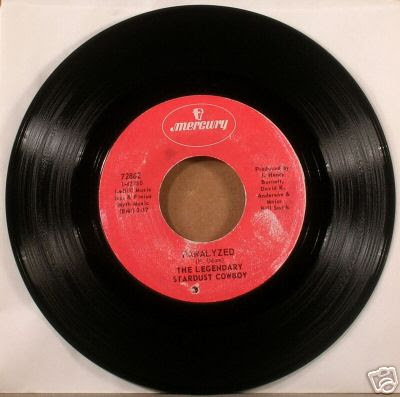 (Long, silent pause from just about every sentient being in the known universe)

It's not much of a stretch to figure you've never heard of the unadulterated brilliance that is "Paralyzed," or the guy who performed it, so let me clue you in.

I've loved weird and stupid records since as far back as I can remember but didn't really commence my lifelong obsession with collecting them until the fall of 1983, and during that golden season I picked up a copy of Rhino Records' THE RHINO BROTHERS PRESENT THE WORLD'S WORST RECORDS!, a terrific complilation that falls short of its title by including records that, while admittedly awful, are for the most part items you can listen to without violating several strategic arms limitations treaties. 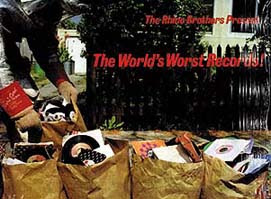 Actually coming equipped with a barf bag (that I have long since lost), this album opened my doors of perception in many ways, introducing me to the garage classic "the Crusher" by the Novas — a tune worthy of a whole post of its own — and "Paralyzed." I was ready for just about everything else to be found on that platter, but when "Paralyzed" came on I almost flew backwards off of my chair and bounced off the wall in abject shock. I once heard James Brown's classic and largely unintelligible "Papa's Got A Brand New Bag" described as "a record that couldn't be more in your face if James brown himself erupted from your speakers and threw you bodily around the room," and that's a description that only begins to approximate the head-scratching charm of "Paralyzed."

The Legendary Stardust Cowboy, perhaps the most unique figure in the annals of country music.

The "song" opens with a drawling voice proclaiming, "Howdy! This is the Legendary Stardust Cowboy, singing for bugles. Good ol' stardust bugles," (this non sequitor intro is excised from the Rhino compilation) after which, with no forewarning, a voice loudly bellows what sounds like "When I go to the show, fmozameelagreablshminkasow, Paralyzed!" followed by a heartfelt "YAAAAAAAAAAAA-HOOOO!!!" More incomprehensible lyrics fly fast and loose over an accompaniment of wild acoustic guitar strummings, the most from-out-of-nowhere trumpet fanfare ever committed to vinyl, and a drum solo that sounds like someone kicked an entire drum kit down eight flights of stairs. This cacaphony only escalates in scope and madness as the singer's impassioned shouting metamorphosizes into a series of squawks that aren't far off the mark from the crowing of a barnyard rooster, all occasionally punctuated by declarations of "Paralyzed!!!" When it finally ends it climaxes somewhat abruptly, the torrent of noise coming to a complete halt save for a couple of final licks on the drum that appear to come from cathartic exhaustion rather than anything resembling a composed musical game plan.

Clocking in at just two minutes and thirty-one seconds, "Paralyzed" is a true tour de force in every sense of the term.

In the years since 1983 I have shared this record with anyone I can convince to sit through it and nine times out of ten people fall in love with it simply because it's just so balls-out fucking insane. My pal and former-Marvel Bullpen colleague Paul Becton, an unimpeachable expert on the genre of westerns, didn't know what to make of "Paralyzed" when I first played it for him, but he rather philosophically stated that if one looked at what the Wild West was really like and took into account what probably went on in saloons and other such places of dodgy entertainment, the cowpokes of old may have been down with what the Legendary Stardust Cowboy was expressing. Considering what Paul said, I tried to imagine one of those classic black-and-white matinee westerns starring a singing cowboy like Gene Autry or Roy Rogers busting loose with a rendition of this tune and I can just picture a gobsmacked audience sitting there in the indoor twilight of the movie theater, their mouths hanging open in utter confusion, and some black dude noting aloud from the rear balcony, "What in the fuck was that?!!?"

"Paralyzed" even became the unofficial theme tune for the Marvel Bullpen during part of the early 1990's, and can still elicit a smile and an off-key "YAAAAAAAAAAAAAAAA-HOOOOO!!!" from those who were there, if prompted.

But what of the Legendary Stardust Cowboy himself? Just who is this phantom genius who unfairly hovers deep in the outskirts of musical limbo while other far less trailblazing country stylists such as Johnny Cash and Hank Williams,Sr. have gained immortality? From Wikipedia (read it and be amazed; you just can't make this shit up):

The Legendary Stardust Cowboy, born Norman Carl Odam on October 10, 1947 in Lubbock,Texas, is an incoherent rock and roll performer who invented an early example of the genre that came to be known as psychobilly in the 1960s. While often considered a novelty artist, he considers himself a serious performer. He recorded his only "hit," the song Paralyzed, in 1968, in what was, apparently, a moment of spare time in a recording studio in Texas. T-Bone Burnett played drums on the record. The lyrics to this magnum opus are unintelligible snarls, growls, and similar vocalisms, surrounded by frantic strumming on acoustic guitar, Burnett's equally frantic drumming, and occasional yelps of what sounds like the song's title, "Paralyzed!" Five hundred copies of the single were initially pressed. It earned the Cowboy an appearance on Laugh-In, the TV comedy show. Unfortunately, a musicians' strike forced the postponement of some follow-up TV appearances for Odam, and by the time the strike was over, his 15 minutes of fame were up. Paralyzed went on to be featured on several Doctor Demento compilations, and it often appears prominently in lists of the worst recordings ever made. The Cowboy has recorded a number of songs since Paralyzed. I Took A Trip On A Gemini Spaceship was covered by David Bowie on his Heathen album. Odam returned the compliment by recording his version of Space Oddity. David Bowie has been a fan of the Legendary Stardust Cowboy, who likes to be called "The Ledge", since he heard "Paralyzed". Bowie himself has said that the "Stardust" in "Ziggy Stardust" is taken from The Legendary Stardust Cowboy. 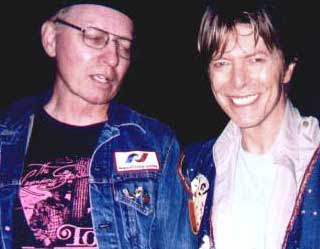 The Ledge with David Bowie.
Sadly it appears that YouTube has taken down the Ledge's epoch-making appearance on LAUGH-IN, but you can find a terrific live version of "Paralyzed" from some Australian show that features him being his usual overwraught self, accompanied by a bunch of musicians who look like they just escaped from a radioactive trailer park. 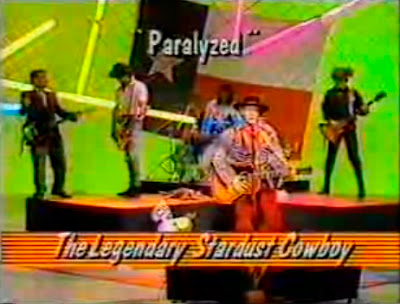 And don't forget to check out the Ledge's website ! He so totally rules.
Posted by Bunche (pop culture ronin) at Monday, January 07, 2008

Everything that Bunche has written here is right on. This song rocks!

I have played this song to my kids (nothing like 3, 6-8 year olds howling), and this song is always on my iPod, along with other 90's Marvel Bullpen favorites from The Mentors, The Meatmen and Dr. Know.

Only thing more blood curdling than the in your face opening of paralyzed is the hysterically maniacal ending of Fistfuck. Be chilled by it...

That video is fucking awesome! His backing band is kind of what I'd picture "Dr. Teeth and The Electric Mayhem" to look like if they were real humans...

This is the GREATEST SHIT I've ever seen! You've made my day! Anyone ever says this blog serves no purpose I'll kick their balls through the top of their head.

Oh! Thank you. I was not aware of LSC before. And wasn't that Dave Stewart on guitar back there?
Why not?

The Legendary Stardust Cowboy has several albums available on itunes. And yeah, he fucking rules. Thanks, Steve!