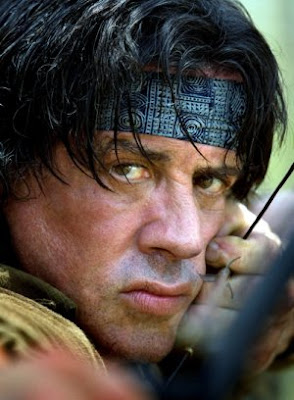 Today marks the release of RAMBO, the fourth in the Stallone-driven franchise and the first series entry in two decades, and I can't wait for the work day to end so I can see it this evening among the foaming-at-the-mouth Brooklyn multiplex throng.

John Rambo was probably the number one action hero icon of the Reagan-era 1980's, a one-man army who meted out martial payback to the enemies of both himself and his country in various inventive and ultra-violent ways. A physically and mentally-scarred veteran of the Viet Nam conflict, Rambo could be summed up as sort of a modern Zen warrior who lost himself in the "now" of combat, a mostly stoic state of being well suited to Sylvester Stallone's melancholy, hangdog expression and monosyllabic acting chops, as well as being just what audiences at the time needed by way of a hero every bit as hollow as the times that spawned him.

Debuting in 1982's FIRST BLOOD, Rambo innocently finds himself on the wrong side of a mountain town's hard-assed sheriff (played to perfection by Brian Dennehy) and, after enduring one abuse too many and recalling his torture at the hands of the Viet Cong, escapes into the hills to agonizingly kick the asses of anyone ill-advised enough to try and hunt him. His pursuers quickly discovered his guerilla combat and survival skills far outstripped their own and consequently simmered in a heady broth of their own relative impotence. By the time Col. Trautman (Richard Crenna), the officer who trained and commanded Rambo back in Viet Nam shows up to more or less talk him down from his destructive rampage, most of the police force are seriously injured or (unintentionally) dead and much of the town's main thoroughfare is a flaming ruin. It all ends with Rambo's arrest, and we, the viewers, feel saddened at the sorry fate of a man who had been one of his country's finest soldiers and returned home to find his kind unappreciated and labeled "baby killers." Rambo was not some mindless engine of sadistic destruction; he was quiet and thoughtful, and despite his mad skills it all amounted to a case of "don't start none, won't be none," with the sheriff going out of his way to make sure that there was "some." Rambo's predicament was that of the returned and rejected PTSD-suffering veteran writ large as pop entertainment and, in FIRST BLOOD anyway, handled somewhat believably.

Then came RAMBO: FIRST BLOOD PART II (1985), the film I consider to be the textbook example of "action figure cinema." 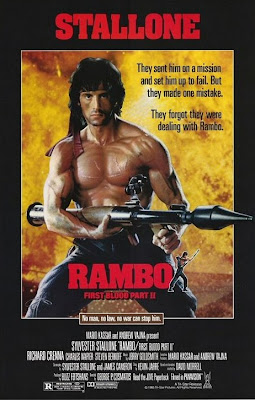 In this first sequel, Rambo — looking more fit and ripped than Stallone ever had up to that point — is sprung from his military prison sentence to get photographic proof that there are no more P.O.W.'s left behind in Viet Nam, and in no time flat he finds out that such is not the case. Going wildly off-mission and armed to the teeth with an array of weaponry that would have made G.I. Joe turn green with envy, Rambo becomes a shirtless '80's fusion of Mack Bolan, Captain America, and Tarzan of the Apes, totally at home in the jungle and kicking ass like a motherfucker. 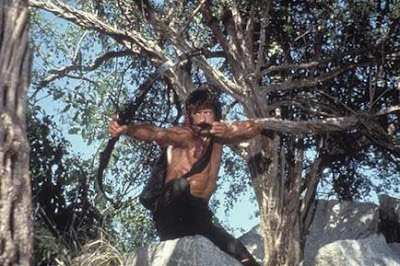 With a "script" co-authored by Sylvester Stallone and John (CONAN THE BARBARIAN) Milius, there was no way the film wasn't going to be a balls-out Warrior-with-a-capital-W movie. There's the requisite explosions and graphic violence that would later come to be par for the course in the genre, both directed with equal fury against the Viet Cong and an evil Russian commander, and there's even a hot native chick who serves as Rambo's comrade-in-arms, a rare feminine presence in this type of flick who "gets" where Rambo's coming from and is in essence the warrior goddess counterpart to his god of war persona. 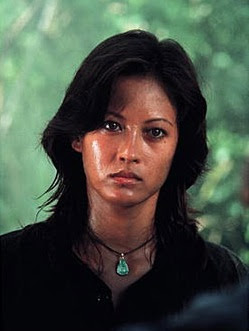 Julia Nickson as Co Bao, Rambo's distaff analog. If you think she looks appealing all sweaty and dirty, check out Nickson out of character: 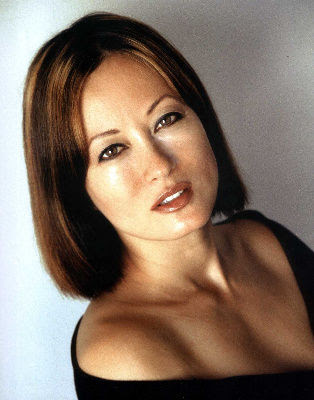 All together, now: WOW.

There is a noticable attraction between the two and even a "sacred marriage" of sorts, involving the gift of a bauble on a bit of leather thong, but since this is the big-screen version of a backyard action figure scenario there's little time for tenderness and none whatsoever for any Osh-Osh as that would get in the way of all the violence, sadism, and stuff getting blowed up real good. Sadly, it comes as no surprise that Co Bao doesn't survive the film. I guess they had to off her, what with her being a girl and all kind of taking away from the eruption of unbridled testosterone found is scenes like this homoerotic uniform/authority figure fetishism S/M moment: 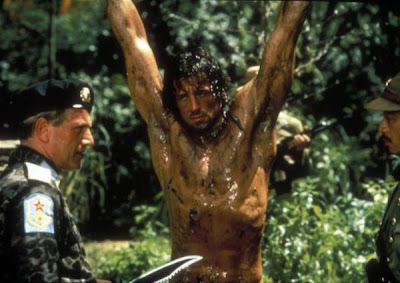 And is it just me, or does Sly have a sort of crucified J.C. thing going on here, an element that only adds to the Tom of Finland effect?

Whatever the reason, our '80's Tarzan was denied his Jane, and once she was gone he moved on and saved the day, just like my small platoon of backyard G.I. Joe's did when my capeless Mego Supergirl bought the farm after being eaten by a rogue Tyrannosaurus during an Adventure Team campaign went horribly wrong (Y'see, Kara was one of many casualties when the A.T. disturbed the Mummy's tomb and were catapulted into the distant past for no apparent reason; her keen eye and skills with an M-16 were sorely missed once the big lizard swallowed both her and her rifle).

RAMBO: FIRST BLOOD PART II made little sense, but it certainly was exciting and entertaining — something that ruffled my stoner-hippie feathers and turned it into a very guilty pleasure for me at the time — and it made a ton of cash at the box office, thereby ensuring a sequel, as well as spawning the ill-advised RAMBO: THE FORCE OF FREEDOM cartoon show in 1986. Seriously, how the fuck do you make a daily kiddie show about an ultra-violent Viet Nam vet with PTSD?

1988's RAMBO III had something to do with our hero on the loose and kicking ass in Afghanistan against the Russians or some shit, but other than a brief exhibition of stick fighting near the beginning there was nothing in the film that held my interest. It's now twenty years after the fact and I remember virtually nothing about it, so I'll just leave that one alone.

And now John Rambo's back, smack dab toward the ass-end of the Dubya era, and when one considers the crippling excesses of the current American regime, er, administration, I suppose his return was kind of inevitable. But what strikes me as interesting about it is the character's own stance as a warrior and a believer in the ideals of his country; from what we've seen of Rambo he's got a lot in common with the highly skilled protagonists found in countless chambara, western, and martial arts flicks, but unlike them he has a "master," namely Uncle Sam (in a more broad sense since Trautman's probably long dead). Rambo would rather exist in some remote and somewhat inhospitable wilderness with only his own brooding thoughts to keep him company, but he'd dump it all in the name of the U. S. of A, provided the cause didn't go against his own deeply held warrior's code. A warrior is trained to kill in defense of his nation, but he is not a "killer" in the murderous sense. Would you call Steve Rogers, Captain America, a killer? If you answered "yes" to that, I'm gonna slap the taste outta yer mouth, and I feel the same way about Rambo. It's quite telling that in the new movie he's not pitted against a bunch of ravening, evil, towel-headed terrorist types, since that would have probably not gone over too well in a climate that isn't necessarily down with what's occurring in the Middle East, and in terms of the character's motivations I very much doubt that Rambo would be on board for such shenanigans either. Nossir, this time he's up against that old Hollywood standby: a bunch of ravening, evil, slanty-eyed yellow peril types who menace some Americans in Myanmar and threaten some pretty white chick with Asian befoulment.

In other words, pure, adolescent action figure cinema, just like it was back in the days.

And as I've aged I've come to rather like Rambo, especially after having absorbed more samurai flicks than I can count, and would love to see someone pen a script worthy of his mythic chops. Maybe John Milius will get off of his ass and send Rambo through time to fight alongside such stalwarts as Achilles, Perseus, and Heracles, or perhaps a jaunt back to the dinosaur era with the 1980's G.I. Joe characters to thwart Cobra's fiendish plan to have Homo Sapiens descend from the DNA of Hitler mixed the dust found left over at the bottom of a bag of Cheez Doodles. Now THAT would be some real action figure cinema for your ass! 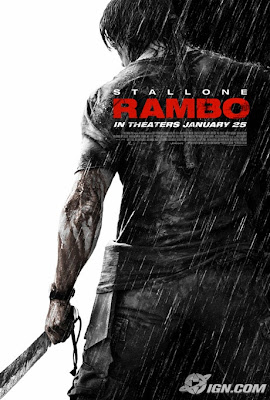 Sly probably figured that throwing in with everyone's favorite Republican-for-sale was more savvy publicity for the film than Stallone's Australian drug bust last year, during which he was convicted for smuggling steriods used while making the Rambo flick.

As you often say, Bunche, you can't make this stuff up!

You know I have not seen one Rambo flick at all? I may see this last one though- sounds interesting enough but I prefer the stallone that surprised me in Copland. Now that was a great performance.

That Nickson out of charachter photo looks like Brenda Walsh.