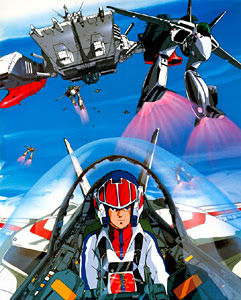 While not a movie per se, the anime landmark SUPER DIMENSION FORTRESS MACROSS (MACROSS for short) is certainly epic enough to warrant attention here and is available in a subtitled and uncut version on DVD (if you can find it; the motherfucker inexplicably went in and out of print in 2002 and can be prohibitively pricey if located on eBay or Amazon).

In the year 1999 a city-sized extraterrestrial battle cruiser crashlands on Earth, and over the next decade scientists and engineers repair its damage and refit it into a hybrid of human and alien technologies. What the Earth-folks don't realize is that the ship has been tailed by an entire armada of heavily armed space battle cruisers who seek to claim the ship and its secrets for themselves. The aliens, called Zentraedi, are a formidible race of giants who have been bred for warfare, but as they approach their presence triggers a booby trap on the downed space-fortress — called the Macross — that plows through them with a devastating energy weapon. Thinking the Earth fired upon them intentionally, the Zentraedi retaliate, thereby launching Space War I. Realizing that it would probably be a good idea to move the confilct off of the Earth (which has just gotten over a long on-planet war), the captain of the Macross orders the use of the ship's untested "fold" system to warp the ship to the dark side of the moon; the warp is initiated, but it brings the small city that had grown around the Macross with it, plus, to the horror of all involved, they find themselves just outside orbit near Pluto (that's what you get for fucking around with technology that you don't know how to operate!). And as if that isn't bad enough, the fold system has completely vanished, leaving the ship's crew and the now-rescued inhabitants of the city no alternative but to make their way back home using only conventional engines. And as the Macross crawls back to the Earth, the enemy fleet is not far behind...

That's the basic setup, but what makes MACROSS stand out from the plethora of alien invasion space operas that came before it — most notably the classic SPACE BATTLESHIP YAMATO (1974) — is its focus on the human element of its story, becoming in essence a soap opera in sci-fi drag. Nearly every character is in some way flawed, and despite the military experience held by many of them, that experience frequently proves moot in the face of deep space combat and technologies that they simply do not comprehend. The ostensible hero, sixteen-year-old stunt pilot Hikaru Ichijo, comes of age during the course of the narrative and we follow him through every awkward step, tracing his evolution from prodigy civilian airman to ace space-fighter, as well as seeing him swallow his reluctance to kill once he joins the United Nations Space Navy (annoyingly dubbed the "UN Spacy" for short). Hikaru's also at the center of a love triangle that sees his emotions split between a cute Chinese girl who ends up going from waitress to pop idol overnight, and his by-the-book career military commanding officer; this triangle is milked for all it's worth and is the primary reason that the series proved so popular with female viewers, along with the romantic trials and tribulations of the rest of the voluminous cast. 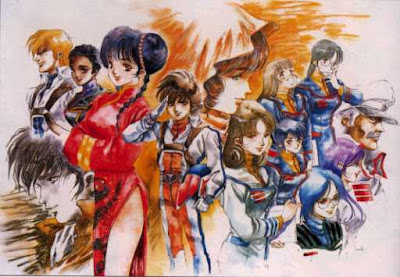 The MACROSS cast.
Another thing that sets the series apart from the cliche template is the pan-cultural scope of the cast. The hero may be Japanese, but the rest of the characters run the ethnic gamut, the bridge crew alone being comprised of a couple of Russians, an American or two, an Italian, and a black chick. This was very refreshing at the time, with the then-most-contemporary multi-culti cast of characters being found in the various incarnations of CYBORG 009, but each member of that international team was drawn in the most broad of ethnic stereotypes. Not so with MACROSS, which didn't make a big deal out of the characters' ethnicities and saw only the Chinese character standing out because of her frequently-worn Hong Kong-style dresses and hairstyles.

And while the show certainly has a contingent of fans who revere it for its space battles and transforming mecha, I have to say that I love it most for starting things off on a footing that allows the viewer to think they know exactly where the story's going to go and then consistently pulling the rug out from under them. The love triangle plays out in a way that sees all three participants change and grow, the B-characters go through some serious drama involving the tragic casualties of war and the possibilities that can blossom between even the most bitter of enemy rivalries (let's hear it for Max and Millia!!!), and even the enemy aliens prove to be far more than just stock evil world-conquerers when their strange and ancient history proves that there really is something to the universal nature of basic "humanity."

SUPER DIMENSION FORTRESS MACROSS is easily the most well-crafted and intelligent of the space operas from the 1980's, both in terms of narrative and visual impact, and totally raised the bar on how such material can and should be handled. In fact, the only serialized alien invasion show to come along since that even comes close is NEON GENESIS EVANGELION (1995), a series that wears its MACROSS influence on its sleeve but somehow comes up a lot less satisfying. If you can get your hands on the Animeigo boxed sets of the original unct and subtitled MACROSS series — avoid the sequels and the not bad Americanized version, ROBOTECH — do yourself the favor and check them out, starting with episode number one because the whole thing's one long story told in thirty-six chapters. Even if you're not an anime fan I urge you to TRUST YER BUNCHE on this one. Space operas seldom get any better than this, and SUPER DIMENSION FORTRESS MACROSS sure as hell beats the three recent STAR WARS atrocities.
Posted by Bunche (pop culture ronin) at Wednesday, January 02, 2008