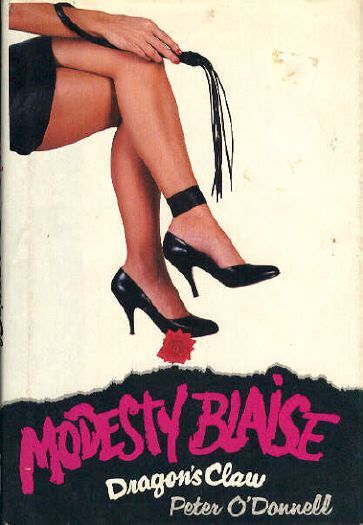 This time around, Modesty Blaise and Willie Garvin run afoul of a bizarre assortment of art thieves whose crimes seem to have no discernible motive and also involve the kidnapping of notables within the art field. Modesty becomes involved when she rescues Luke Fletcher from a slow death in a small boat, hundreds of miles from any chance of being found. Fletcher's a famous up-and-coming painter who disappeared the previous year, leading the world at large to believe he had drowned, but now he turns up amnesiac and with his forearms riddled with marks left by hypodermic needles. The rescue puts our heroes square in the sights of the aforementioned criminals, and from there we're off to the races.

DRAGON'S CLAW is simply a cataloging/rehash of every element previously seen in the Modesty Blaise series that makes me wonder if author Peter O'Donnell's heart was really into it. The book is nearly three hundred and twenty pages long and it uses up the first two hundred of those in a turgid and utterly predictable setup that gets Modesty and Willie to the bad guys' island lair, after which it picks up considerably but by then it's too little too late. And, adding insult to injury, the plot is pretty much a far-less-effective redo of a previous series entry, namely THE SILVER MISTRESS (1973), a book two installments preceding this one. It's one thing to try and fool your readers with a thinly disguised rewrite, but it's another to do it so soon in the series' progression. DRAGON'S CLAW is quite a letdown and definitely doesn't warrant revisiting, ranking just below THE NIGHT OF MORNINGSTAR as the most perfunctory and weakest of the series, in my own humble estimation.
Posted by Bunche (pop culture ronin) at Friday, January 11, 2008