TO BOLDLY CAVEAT WHERE NO EMPTOR HAS CAVEATED BEFORE 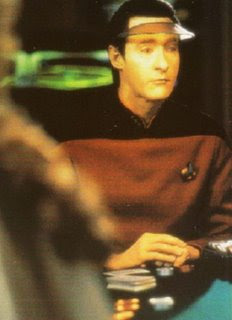 Thanks to La Biche for this one.

NEW YORK—A Star Trek fan who paid $6,000 for a poker visor that was said to have been worn by the character Data on Star Trek: The Next Generation claims in a lawsuit against Christie's that the prop is fake.

Ted Moustakis said he took the visor, which he purchased at an auction of CBS Paramount props in 2006, to a convention in August to have it autographed by Brent Spiner, the actor who played Data, and Spiner said it was a fake, and that he had sold the actual prop himself.

Moustakis filed the lawsuit in state court in Manhattan, demanding millions of dollars in punitive damages and a refund for the visor and two other items he purchased: a table that was part of the set, for which he paid $6,600, and a uniform from Data's wardrobe, for which he paid $11,400.