WHO WILL BE THE "LAST BEATLE STANDING?" 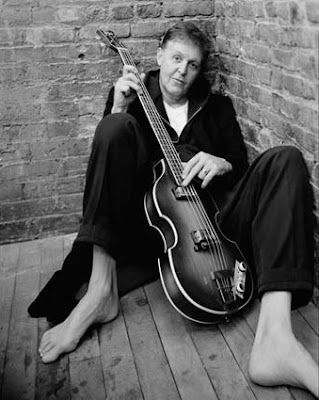 I've wondered for a while exactly which of the Fab Four would end up as "last Beatle standing," and it looks like my reasoning that Ringo has done especially well in the departments of quality pussy and growing old in style may prove to be the deciding factor. So Ringo's sitting pretty (well, as pretty as he can be, that is), John Lennon's death was not only tragic but also offensive, George's all-too-mortal demise was a sad counterpoint to his spiritual leanings, and since Linda's death poor Paul has been through the emotional wringer (do NOT get me started on that one-legged bitch), so what else could possibly go wrong for "the cute one?" From today's SUN:

MACCA HAS A SECRET HEART OP

SIR PAUL MCCARTNEY has had a secret heart operation, it was revealed last night.

The 65-year-old megastar underwent coronary angioplasty - a procedure that opens up arteries and allows a greater flow of blood. A source said: “Paul had been complaining about not feeling well and saw a Harley Street specialist at The London Clinic. “Tests were carried out and the decision was taken to operate. Paul had the angioplasty in a private hospital. It was all very routine but any work on your heart is a big deal.”

A friend of the legend said: “Luckily Paul is in very good shape. He does regular exercise and is fit. He eats well and does not carry any excess weight. He has always been in exceptional health, which is remarkable when you think of the rock ‘n’ roll lifestyle he once had.”

Surgeons perform coronary angioplasty by passing a fine tube in through the groin and up to the aorta. A small balloon at the tip of the tube is inflated at the narrowest part of an artery to squash fatty deposits clogging it and allow blood to flow freely again. A stent - a short wire-mesh tube - is usually left in to prop open that segment of artery. Soccer ace DavidBeckham’s dad Ted, 59, had the op after he collapsed at home with a heart attack.

Sir Paul and bitter wife Heather, 39, have still not reached a financial settlement over the collapse of their four-year marriage. A five-day High Court hearing next month will try to decide how much she should receive from Macca’s £800million fortune. The couple must also work out details for custody of their four-year-old daughter Beatrice. Heather was dumped by celebrity lawyers Mishcon de Reya after TV rants about her marriage. She faces a demand for £2million legal fees.

Last night Macca’s spokesman said of the hush-hush angioplasty performed in the autumn: “It was a routine medical operation.”

Sun GP Dr Carol Cooper said: “About 40,000 angioplasty ops are done each year in the UK because it’s a very good way of treating severe angina symptoms and the success rate is at least 90 per cent.
Posted by Bunche (pop culture ronin) at Wednesday, January 02, 2008

Don't get you started on that one-legged bitch?
Oh go on... you know you want to!

So why, exactly, is a Jainey-come-lately supposedly "entitled" to part of a fortune she had no part in earning? After only four years of a 40-year career? Please!