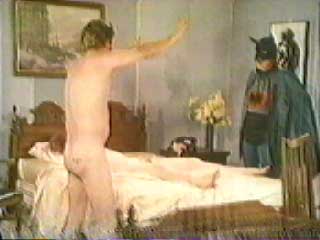 You know the scenario: You’ve had a shit-ass day at work. You’re flat broke. There’s no beer in the fridge. Your cable TV is suffering technical difficulties that only afford clear reception to a sixteen hour FARM REPORT marathon on Lifetime. Dubya is still in office. Your only hope of momentary happiness is to “relax the gentleman’s way.” “Shake hands with the unemployed.” “Have one off the wrist.” “Rub one out.”

I’m talking about the time-honored hobby of jackin’ off. Oh, yeah.

As a vanguard in the preservation and continued promotion of exploitation films, Something Weird Video holds the fate of many key works in its hands. Many of the better regarded films from the Golden Age of Exploitation have been given "Special Edition" treatment by Something Weird. Movies such as Blood Feast, House on Bare Mountain, and The Godmonster of Indian Flats have been remastered and released on DVD in the past, boosting their profile among a wide range of film enthusiasts and providing fans an opportunity to own a copy of these films that they can view again and again.   It is this treatment that we feel should be bestowed upon a little film that would benefit greatly from the exposure. This film is BAT PUSSY, arguably the world’s worst adult film. It is not often that one comes across a film that fails as miserably at attaining the goals implied by its genre status. BAT PUSSY is without a doubt the most unappealing XXX film in the history of adult cinema and has been referred to by some as “anti porn”. It is because of it’s uniqueness that we feel BAT PUSSY deserves to be given a full, “Special Edition” DVD treatment from the good folks at Something Weird Video.

What could possibly be so difficult about making a viable stroke movie? All you need is are two “actors,” maybe some interesting props for possible closeup insertion into a chosen orifice, a script with a line like “Gosh, Mister pizza delivery guy! I have no money. How will I pay for this tasty, four-topping large pizza?” as a preamble to the action, a relatively comfortable location for the participants to fuck on, and a camera (video or film, it’s your call). That’s pretty much it. BAT PUSSY has all of these elements in place, so how does it earn its rep as “anti-porn?” Allow me to explain.

The SOMETHING WEIRD VIDEO print of the movie opens abruptly with no titles, no credits, no music, no nothing, just a grainy closeup of a fat, freckled, ginger-beehived, drawling and naked example of the most HEE-HAWed-out trailer park slag imaginable, kind of like a trashy Kate Pierson from the B-52's, but far less appealing. 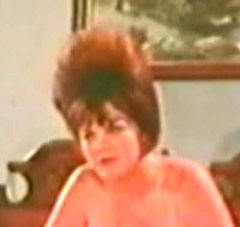 Trust me, this still is a lot more flattering than what we get in the actual movie.

Before we’re given more than a second or two to process that image the camera cuts to a nude, out-of-shape blonde redneck sitting at a table perusing the latest issue of SCREW magazine. 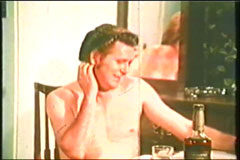 Their pork rind-flavored groping is staggering to behold, and at one point there’s even a tight shot Jerry Lee’s hand probing what at first appears to be the space between a pair of seat cushions but is soon revealed to be his partner’s lady-parts. The beehived behemoth then administers the first in a series of the sorriest B.J.’s I’ve ever seen, and her technique certainly isn’t helped by Jerry Lee’s complete and utter lack of anything resembling an erection for the entirety of the film. 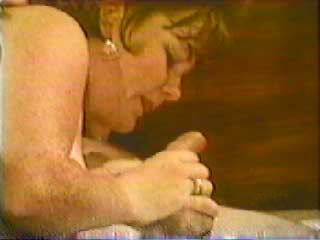 Nope, that ain’t a Vienna sausage…

Jerry Lee reciprocates with some out-of-focus lapping at the gal’s flappy bits, along with some awkward fumbling about with her goat-like udders, all while the two of them drone on and on, trading amateurishly-delivered insults, unintentionally turning the whole mess into some sort of live sex show revival of Edward Albee’s WHO’S AFRAID OF VIRGINA WOOLFE?, only minus any trace of a script, artistic value, or talent. We know this because of the crudely-drawn HQ sign and an embarrassed who narrator clues us in on it, as well as the vital fact that “her twat begins to twitch” at the first sign of trouble. 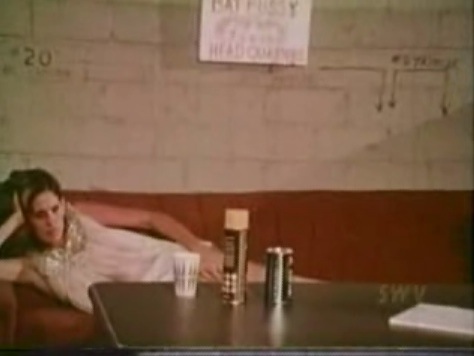 Dora’s easily the hottest thing in the whole sordid work, but even as such she’s about on par with a skank you might find in a bar such as Jackie’s Fifth Amendment, an infamous Park Slope alky bar that caters to hardcore rummies and coffin-dodgers.

After muttering about how “There’s somebody gittin’ ready to make fuck movie in mah holy Gotham City, gaw-dammit!”, Dora Dons her superhero gear and ventures forth as Bat Pussy to deal with the redneck humping that has so irked her. 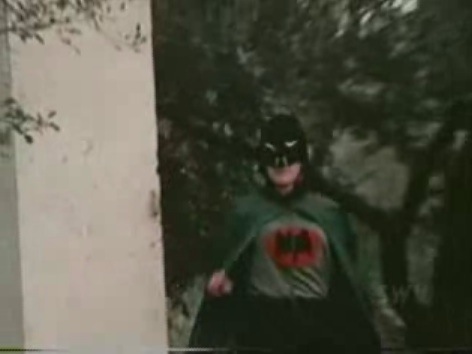 Tremble at the awesome sight of... BAT PUSSY!!!

But there’s no Bat Pussymobile for our bargain basement heroine; instead she bounces along the interstate perched atop one of those inflatable “Hoppity Hop” balls that I so fondly remember from my early years. 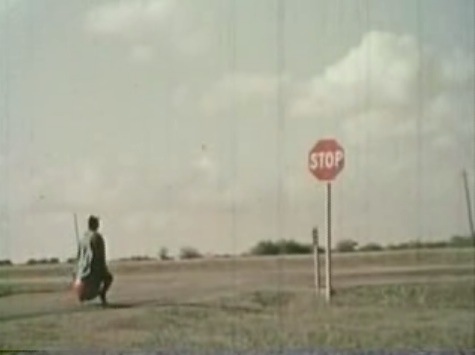 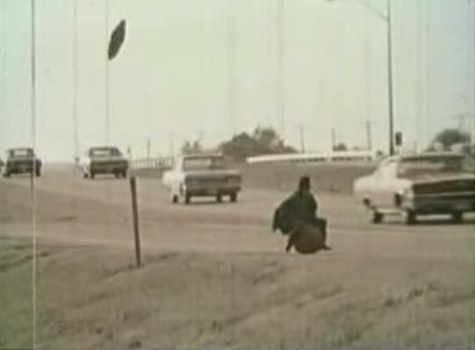 I swear you can’t make this shit up.

When Bat Pussy finally arrives to confront the inbred lovers, she rips off her Bat-gear and dives into the fray. There’s no trace of actual sex, a hard-on, or even a gooey cooter, but B.P. and Jerry Lee gamely (and probably gamily) roll around, even up flopping off the bed once or twice, while the redheaded pork princess takes care of herself with a convenient, unworn strap-on. Bat Pussy then exits, and that’s it.

By this point your brain has been utterly roasted and your penis has retreated into your lower abdominal cavity, in effect becoming a “man-gina.” Even the most hard-up desperado on death row couldn’t “raise the flag” for BAT PUSSY, and I urge all of you reading this to witness this hilarious abomination for yourself. It’s even suitable for mixed audiences — a sure sign that it’s a failure as a garden-variety chicken-choker — and is one hell of a crowd pleaser at parties. The groans of horror and disbelief are worth the price of the DVD — I bought it the second it became available, replacing the VHS tape I'd had for the past twelve years — so TRUST YER BUNCHE and order yours today!
Posted by Bunche (pop culture ronin) at Thursday, January 24, 2008

Labels: FLICK YOU, THE MAGIC OF PORNOGRAPHY

Dear God, Bunche, from what deepest pit of hell did you drag this one from? I BOW TO YOUR GREATNESS

I love how I have to remind myself never to read your stuff at work.

That was good, and by good I mean eye-burningly awful!

This reminds me of something: Have you ever been to San Loco and seen the poster for a Mexican Batman knockoff called "Baty Y Roby Contra El Crimen", (or "Batty and Robby Versus Crime", I guess). I've spent way too long staring at this thing over way too many margaritas. The Mexican Batman looks like a big poof, but Robin actually looks kind of cool-- they dressed him up like an EZLN Zapatista insurgent, with the full-head ski mask, plus a guitar just to make him extra sexy. Have you ever seen this film?

Since 1996, I've owned a VHS copy of this crowd-pleaser, and it's wowed everyone who has watched it in stunned disbelief and horror. I conjecture some desperate Dallas Mob-connected "filmmakers" were in a bar where some redneck tosspot alky captivated them with his running drunken patter--and no doubt the freckled, aging barmaid (the wag's ex-common law wife of a decade) was zinging him back with limply laconic insults. I could see how the drunken "auteurs" were thinking, "Yeah, this could work..."
They let the camera start rolling--and we are left with questions like who was the "director" of this epic? There are frequent drop-outs on the audio as the director suggested bits of business, but one time they didn't bother taking it out and you hear his voice. Could it be Scorsese on a bad day, or Ed Wood on a good one? Or a slumming Wilder, or Fassbinder, or Preminger? And is that the I-20 approach to Dallas looking west that Bat Pussy hippety-hops along in that long shot? Just exactly what IS that tattoo on Jerry Lee's ass? And what the hell is the significance of the message "NUG SAFELOC" majik-markered on the warehouse wall at Bat Pussy HQ?

And what is perhaps the biggest question of all about BAT PUSSY: Would the movie have even gone past the casting stage if the barmaid had uttered her prophetic jab "You never COULD get a hardon!" before they started filming this?