It fills me with immense sadness to write this, but it has to be said. Sirius the dog, better known as "Cyrus" to those of us who knew and loved him, has passed on, leaving behind a legacy of loving companionship and memories of his sweet-faced blue-gray self. 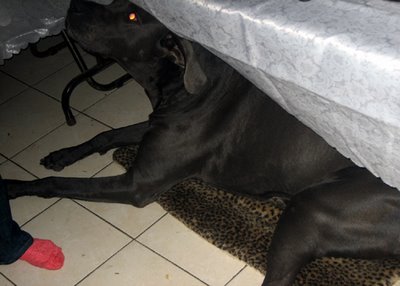 Sirius the dog, one cool son of a bitch.

Having been with my friend Tracey the waitress goddesss since he was an enormous pup, Si was a lovable moosh whose tough guy exterior was soon seen through to reveal a bit of a wuss, but that was part of his beauty. Seriously, would you have fucked with a dog that huge, especially one who was so obviously head-over-heels about his human and her consort? 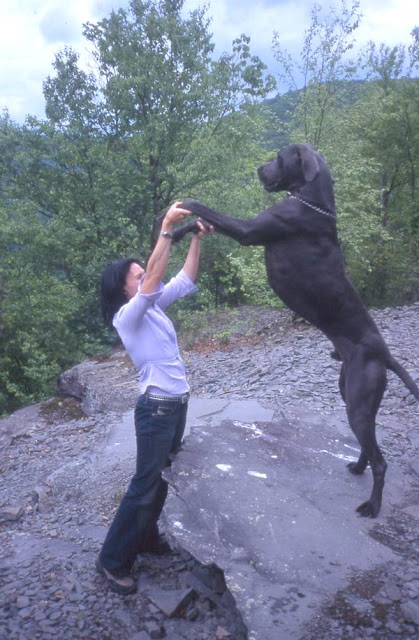 His booming bark would have definitely stopped any monkey business before it started, so Si was the best kind of protection: a forewarning and intimidating presence that never had to be deployed. I mean, those brazenly saggy balls alone... 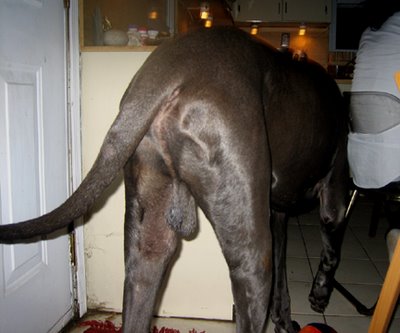 But Tracey did not take the canine behemoth into her home as a substitute for an assault rifle (or clockweights). Si was brought in to provide something that was missing in Tracey's life at the time — this was before she hooked up with the hirsute fellow who would eventually become her husband — and over the years he not only gave her the unconditional love that's part of a family dog's job description, he also taught her a lot about life in general, the way dogs always do when their "owners" love and value them as a part of their own pack and not as some pricey accessory on par with an item from Prada. Can a handbag show you affection? No. Does a pair of designer shoes twig to when you're feeling miserable and out of sorts, and take comforting action to make you feel whole again? No. Does any material item light up with hapiness at the mere sight of you walking through the door after hours away at work at some shitty job and greet you with appreciative exclamations and a wagging tail that's a danger to any unsecured furniture or knicknacks? Unequivocally, no. Si provided Tracey and Brendan with all of that and more, and his contribution to their lives and the lives of his supplementary pack will never be underestimated, forgotten, or replaced.

So, as I get teary-eyed while typing this, I say Hail to thee, Great Sirius! Chewer of bones! Fecal defacer of obnoxious band logos! Rampaging cushion violator! And, most importantly, filler of Tracey's heart with a love she didn't realize she was capable of knowing, and opening many significant doors for her simply by being there. You were a great friend, and when all is said and done one really can't say any better than that. 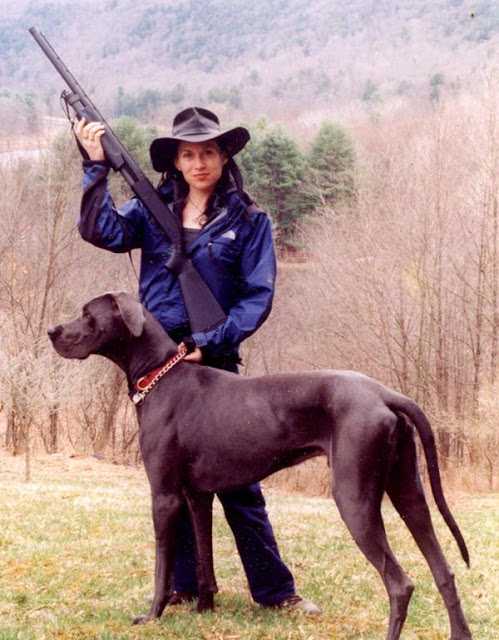 that's sad...what a handsome, regal fellow (okay maybe not the dangling nuts so much). i think it's probably harder to lose a dog than any other pet. a dog is such a presence in their owners lives, then when the dog itself is a large breed they add a huge physical presence as well. tracey, i'm so sorry for you.

he was, most certainly, an amazing dog.


he is in dog heaven now where there is an endless supply of raw hide, dog bones, shoes, dog food, paper towels---everything.

Even I'm saddened by the untimely departure of the Sirius. And, as Buncheman knows, I hated dogs.

At least dogs that were douche bags.