THE KILLING JOKE: MORE ON HEATH LEDGER AND THE CLOWN PRINCE OF CRIME 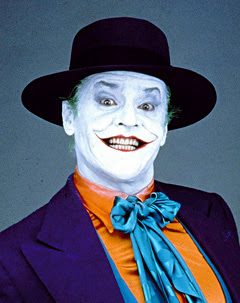 Jack Nicholson, who played the Joker in the 1989 'Batman' movie, says he warned Heath Ledger, below, about the part.

Heath Ledger thought landing the demanding role of the Joker was a dream come true - but now some think it was a nightmare that led to his tragic death.

Jack Nicholson, who played the Joker in 1989 - and who was furious he wasn't consulted about the creepy role - offered a cryptic comment when told Ledger was dead. "Well," Nicholson told reporters in London early Wednesday, "I warned him."
Though the remark was ambiguous, there's no question the role in the movie earmarked as this summer's blockbuster took a frightening toll. Ledger recently told reporters he "slept an average of two hours a night" while playing "a psychopathic, mass-murdering, schizophrenic clown with zero empathy ... I couldn't stop thinking. My body was exhausted, and my mind was still going." Prescription drugs didn't help, he said.

Ledger's ghastly image as the Clown Prince of Crime in "Dark Knight" has been an Internet sensation since trailers were released in December, featuring Ledger in full death's-head mode. 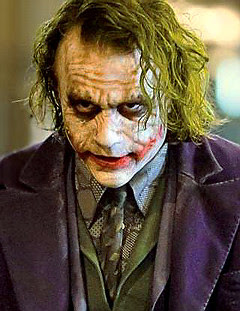 His face chalk-white, his hair green and his mouth a sliced red grimace, the handsome 28-year-old Australian actor looked frighteningly true to the character in the Alan Moore graphic novel, "Batman: The Killing Joke." [BUNCHE NOTE: No he didn't!]
The movie wrapped filming in the fall - right after Ledger's breakup with actress Michelle Williams - and post-production work finished not long after.

While "Dark Knight" is the film that will stand as Ledger's cinematic gravestone, insiders say the flick, set for a July 18 release with Christian Bale as Batman, won't suffer from his death. "Ledger's portrayal of the Joker is already one of the most anticipated screen characters of the whole year," says Gitesh Pandya, editor of the movie tracking site boxofficeguru.com
"I think most of the audience will still be there. If anything, I would think the marketing of his character might be scaled down a bit. "The Joker is a character where you could go over-the-top with marketing. The studio might scale that back a bit in the next few months, just to be respectful."

Tony Timpone, editor of the fantasy magazine Fangoria, said the movie should do well, despite the "cloud over it" from Ledger's death. "It's going to be tough, because the Joker is such an indelible character, and Heath was such an indelible actor. It could be tough to disassociate ourselves from reality. Because the movie looks like it's going to be so dark, and his life had such a dark end."

Critic and film historian Leonard Maltin said Ledger's death will heighten curiosity about the movie - and certainly won't hurt the box office. "This is sad and so different from any previous examples, because the film has such an enormous built-in audience; people will go anyway, but there's no question it could cast something of a pall over the film," Maltin said. "It says something about the curious nature of film, that someone can be so alive onscreen when we're all too aware that they've passed. It underscores how we're mortal, and films are immortal."
Posted by Bunche (pop culture ronin) at Thursday, January 24, 2008

Eerie thing is, the character Heath really looks like is not The Joker but The Crow... the role in which Brandon Lee suffered a similarly dark fate at the tail-end of production.

Playing the Joker is supposed to be such a scary thing? The Joker? Acting attracts a lot of goofballs now doesn't it?

Both Ledger and Nicholson are/were method actors. In that style, you attempt to get as far into your character's head as possible, then tie your own experiences, perceptions and emotions to his. Considering how dark and vile the head of someone like the Joker would be if you took him seriously, there's some very scary stuff to be found in that kind of approach.

Ledger and Nolan certainly took the character seriously - no Caesar Romero goofing around here. So yeah - knowing method acting and the psychic toll involved, I would not doubt that the role inflicted some serious damage on Ledger, who sounds as though he was already in a pretty dark place to begin with.

(Yo, Jared: Have you read Joker stories like Mad Love, The Killing Joke, Arkham Asylum, Dark Knight Returns or the Laughing Fish saga? If so, you'd see what a frightening character he truly is.)

I have read countless Joker stories. I've never liked the character. He's a clown that commits crimes! He is possibly the goofiest character ever. I could go on endlessly (to my friends' chagrin) about how non-scary he is. He can't fight, he can't plan, he kills his henchman, all he is good at is breaking out of the nut house which they always put him right back in to break out the next time.
I can't speak to the craft of acting but I do know that plenty of actors have played plenty of scary rolls and have not been scarred by them. So I still don't buy the playing the Joker is so frightening bit. It's all part of the act.

May I be the first to say FUCK JACK NICHOLSON! Did he consult Cesar Romero before he took on the role? All he did was put on clown makeup and give the creepy stare into the camera he learned while filming The Shining. Nicholson's Joker sucked. The Joker is a rail thin, foppish psycho weirdo, not a fat middle aged man in a shitty Halloween costume. Prince would have been a better Joker! Here's how I imagine the casting for that role went:

"Hey the Joker is crazy. Nicholson does crazy. Done."

Like he's some kind of authority on the Joker. Fuck you Jack. Go do another Adam Sandler movie or go to a Lakers game. And that Sandy Corolla fan film still has the best looking, most faithful Joker in it.