Hollywood from roughly 1949 through the early 1960's was for some reason overrun with historical/religious epics, grand-scale entertainments featuring casts of thousands running around with fake swords and whatnot, getting into all kinds of carnage and daring-do, and usually somehow sandwiching a romantic angle into the whole shebang. Among the most notable examples of this genre are SAMSON AND DELILAH (1949), the unintentionally hilarious THE TEN COMMANDMENTS (1956), BEN-HUR (1959) and the film that some consider the manliest movie ever made, Stanley Kubrick's SPARTACUS (1960), each foaming at the mouth with lashings of sex and/or violence that could be gotten away with in such a repressive era by being presented in an "historical" context. All are very entertaining and all have carved out well-deserved places in cinema history, but there is one such movie that seems to have been glossed over in favor its more lavishly-appointed brethren. That film is Richard Fleischer's THE VIKINGS, and after years of hearing many glowing reviews I have finally seen it for myself. Hey, it was only eight bucks on DVD thanks to the Virgin Megastore's "Virgin Sacrifice" sale, so I figured why the hell not? 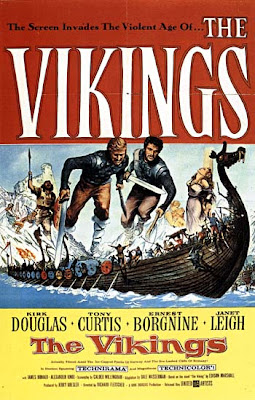 The 1958 theatrical poster.
The funny thing is I thought I had seen this flick on TV during my growing up years, but I definitely had it confused with some other rape-and-pillage opus that wasn't even one fifth as fun (I think I had it confused with 1964's THE LONG SHIPS, whihc has an unforgettable torture scene featuring "the Mare of Steel"). Believe me, if I'd seen THE VIKINGS as a kid I would have remembered it vividly, because while other films in the historical epic genre may have featured sex and violence, none of them did it with the sheer zeal and love of mayhem displayed here. In fact if you try to think about it as a film being released today, THE VIKINGS would definitely get a strong PG-13 for content alone as is, and if made today the amount of fake blood would probably have been upped a tad, probably garnering the end result an R rating. No bullshit, for its time this is some pretty harsh stuff, and since the rating system did not yet exist kids could pay their matinee money, sit down in the indoor twilight, and revel in the joyous brutality that unspooled.

The story opens with an animated bit that swiftly explains the Viking raids on England — and looks to me like the inspiration for Terry Gilliam's illuminated manuscript cutout bits in MONTY PYTHON AND THE HOLY GRAIL (1975) — and wastes no time on such irrelevance as credits, dropping us smack dab into a violent massacre of the English lead by Viking king Ragnar (Ernest Borgnine). 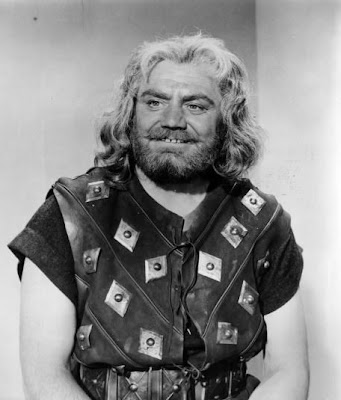 As his men lay waste to dozens of innocent people Ragnar stops off for a refreshing bit of rape, an act that, unbeknownst to him, sires a son. The woman he violated conveniently turns out to be the Queen of England, and since her union to the now tits-up king was famously fruitless she has the baby in secret and sends him off to Italy where he'll never be discovered. In the meantime the throne is taken over by Aelle, a ruler-type common to stories such as this insomuch as he's a faggy asshole with a bad hairdo who treats everybody like shit and has people executed for the slightest of infractions. Years later he discovers one of his advisors is the guy who's funneled the Vikings info on the easiest spots along the coast to ravage, and once discovered he hightails it to the north and moves in with Ragnar's rowdy band. We then meet Ragnar's over-the-top anti-hero of a son, Einar (Kirk Douglas in full-on testosterone mode), a violent, boozing rakehell who's so in love with his own beauty that he refuses to spoil his looks by growing a beard. 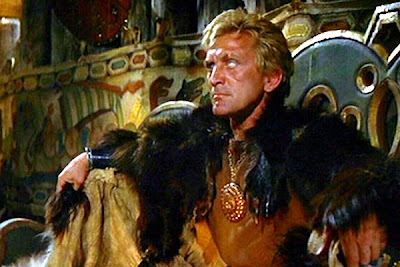 Kirk Douglas (and chin) as Einar.
Then Tony Curtis shows up as Eric, a much-put-upon slave who spends his time either looking wistful or glowering like he was about to turn into the Wolf Man. 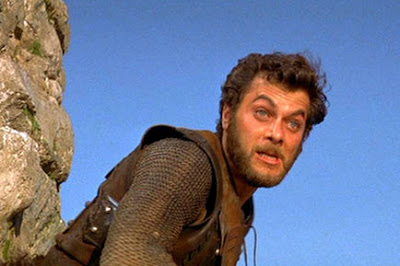 Tony Curtis as Eric, looking manly (for once).
In no time flat we realize Eric's actually the baby who was sent to Italy, but those wacky Vikings raided the ship he was on and instantly enslaved his ass. There's no love lost between Einar and Eric — especially after Eric orders his pet falcon to rip Einar's face off, resulting in scars and the loss of an eye — a situation made more poignant by them having no idea that they share a father. But what kind of Viking saga would this be if they concentrated on emotions and family dysfunction and stuff when they should rightly be dishing out heaping helpings of drunkenness, carnality, and (for the time) graphic violence? Thankfully we get lots of scenes taking place in Ragnar's mead hall, a place where it seems like the party is simply incapable of stopping, no matter how drunk and violent the revelers get. I mean, really in what better setting could you plan out profitable raids and kidnap plots?

The romance angle enters the story when King Asshole, er, Aelle arranges to marry the Welsh Princess Morgana (Janet Leigh, just one year away from the screen's most memorable death scene, namely the shower stabbing in PSYCHO) for political reasons, so Ragnar decides to abduct the girl just for shits and giggles. If you've ever seen an epic that has to do with ancient warriors and some chick, you can see the triangle in this one coming a mile away as Einar makes plain his desire to take Morgana as his queen and rape the living shit out of her (he likes it when his women put up a fight, particularly if it involves scratching), Eric stands around looking doe-eyed while treating her with kindness and helping her escape, and Morgana instantly falling in love with Eric, who's definitely a step up from that douchey king. Anyway, one thing leads to another as Morgana ends up back in Aelle's clutches, Eric loses his hand for pissing off the king, Ragnar gets torn apart by a pit full of starving wolves, and the Vikings sail down from Norway to kick some castle ass like you've never seen (Eric and Einar form a truce until they rescue Morgana). The final battle is totally badassed and must have knocked people out when it first showed up on the big screen.

THE VIKINGS is a lot of fun and is definitely a good way to pass nearly two hours on a rainy weekend afternoon, so if you enjoy manliness, historical epics, and wish-fulfillment stories of endless heavy-metal partying, wenching, and engaging in exactly the opposite of the kind of behavior your parents would approve of, this is the flick for you. Oh, and director Richard Fleischer's also responsible for the big-screen adaptation of MANDINGO (1975), so make of that what you will. TRUST YER BUNCHE!!! 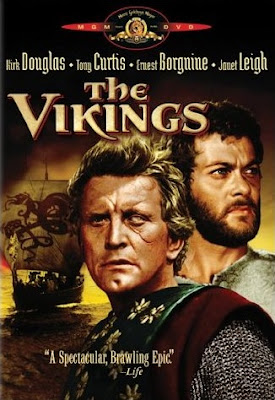 All this balls-out machismo can be yours for a mere eight bucks at your local Virgin Megastore! Free chest hair with every purchase!
Posted by Bunche (pop culture ronin) at Wednesday, January 09, 2008

I loved this movie as a kid, I'm surprised you never saw it. They used to play it on the 4:30 movie and similar outlets through the 70's and 80's.

Excellent movie that totally stands the test of time.

ahh. Movies like this make me proud to be a Viking!!
--E!