Alleged wife-beater (I believe it) and self-proclaimed "creator of rock 'n' roll" Ike Tuner is finally tits-up, and I'm rather conflicted on how I feel about that. I loved the guy's music, but any guy who beats up women, especially one as all-around excellent as his former wife, Tina Turner, is not someone I can respect as a human being. But Tina's a Buddhist these days and has probably let that shit go, so perhaps I should follow her lead. Anyway, here's the skinny from this morning's New York Times:

Ike Turner, Musician and Songwriter in Duo With Tina Turner, Dies at 76

By JON PARELES
Published: December 13, 2007
Ike Turner, the R&B musician, songwriter, bandleader, producer, talent scout and ex-husband of Tina Turner, died on Wednesday at his home in San Marcos, Calif., a San Diego suburb. He was 76.

His death was announced by Jeanette Bazzell Turner, who married Mr. Turner in 1995. She gave no cause of death, but said he had had emphysema.

Mr. Turner was best known for discovering Anna Mae Bullock, a teenage singer from Nutbush, Tenn., whom he renamed Tina Turner. The Ike and Tina Turner Revue made a string of hits in the 1960s before the Turners broke up in 1975.

Tina Turner described the relationship as abusive in her autobiography, “I, Tina,” which was adapted for the 1993 film “What’s Love Got to Do With It?” and made Mr. Turner’s name synonymous with domestic abuse.

“I got a temper,” he admitted in 1999 in his autobiography, “Takin’ Back My Name: The Confessions of Ike Turner.” But he maintained that the film had “overstated” it.

Mr. Turner’s career extended back to the 1950s, when he played with pioneering Mississippi Delta bluesmen and helped shape early rock ’n’ roll as well as soul and rhythm-and-blues. “Rocket 88,” a song his band released in 1951 under the name Jackie Brenston and his Delta Cats, is regularly cited as a contender for the first rock-’n’-roll record for its beat, its distorted guitar and its honking saxophone.

Ike and Tina Turner were inducted into the Rock and Roll Hall of Fame in 1991.

Ike Turner, whose full name is variously given as Izear Luster Turner Jr. and Ike Wister Turner, was born in Clarksdale, Miss., and was brought up there by his mother after his father, a minister, was beaten to death by a white mob.

As a child Ike spent time at the local radio station, WROX, a hub for Delta blues performances. According to Mr. Turner’s autobiography, the D.J.s taught him how to cue up and segue records, sometimes leaving him alone on the air when he was 8 years old.

He grew up around Delta musicians like the bluesman Robert Nighthawk Jr. and the pianist Pinetop Perkins, who gave him boogie-woogie lessons, and he learned to play guitar.

In high school he formed a group called the Kings of Rhythm. B. B. King helped that band get a steady weekend gig and recommended it to Sam Phillips at Sun Studios in Memphis. The band had been performing jukebox hits, but on the drive from Mississippi to Memphis, its members decided to write something of their own.

Their saxophonist, Jackie Brenston, suggested a song about the new Rocket 88 Oldsmobile. The piano-pounding intro and the first verse were by Mr. Turner, and the band collaborated on the rest; Mr. Brenston sang.

Sun was not yet its own record label, so Mr. Phillips sent the song to Chess Records. It went on to sell a half-million copies. “I was playing rhythm and blues,” Mr. Turner wrote. “That’s all I was playing.” His book says he was paid $20 for the record.

Mr. Turner became a session guitarist, known for his flamboyant, note-bending use of his guitar’s whammy bar. He was also a producer, songwriter and talent scout for Sun and for RPM/Modern Records. He worked with Mr. King, Bobby (Blue) Bland, Howlin’ Wolf, Johnny Ace, Otis Rush, Elmore James and many other blues and R&B musicians.

In 1954 he moved up the Mississippi River to East St. Louis, Ill., where his disciplined and dynamic band became a major draw at local clubs. There, in 1958, he heard Anna Mae Bullock, who joined the group and quickly became its focal point as Tina Turner. The band was soon renamed the Ike and Tina Turner Revue. Her lead vocal on “A Fool in Love” started a streak of Top 10 R&B hits for the revue and also reached the pop Top 40. It was followed by “It’s Gonna Work Out Fine” in 1961. The duo became stars on the grueling so-called chitlin’ circuit of African-American clubs.

Ike and Tina Turner had a wedding ceremony in Tijuana, Mexico, in 1962; Mr. Turner’s book said they were never actually married. They had a son, Ronald, who survives him, along with Jeanette Bazzell Turner and four other children: Mia, Twanna, Michael and Ike Jr. 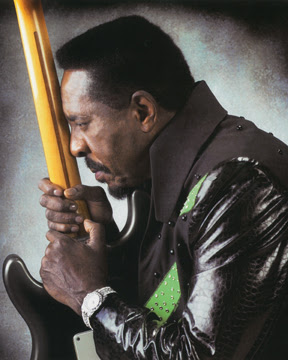 My favorite obit headline so far: