OH, FOR FUCK'S SAKE!-EXACTLY WHAT THE FUCK IS UP WITH MICHAEL JACKSON? 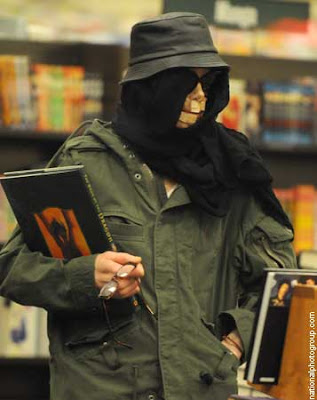 No, that isn't Ben Grimm out shopping for manga. It's Michael Jackson! AAAIIIIEEEE!!!!!

One of the many things that makes me feel old is being able to remember when Michael Jackson was black. No, really. Michael used to be not only black, but he was really good-looking, causing panties to get swampy across all racial borders, and what has he been for the past fifteen years or so? A white woman. And now, if the photos in today's New York Post are any indicator, he's once more surgically altered himself, perhaps in hope that he'll swipe Michael Chiklis' part as the Thing in FANTASTIC FOUR 3: ATTACK OF THE PEDOPHILES FROM THE NEGATIVE ZONE. 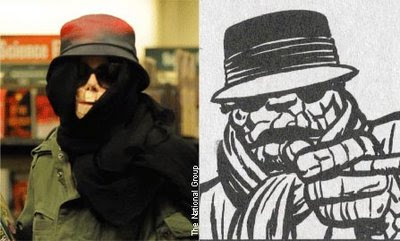 Michael Jackson and Ben "The Thing" Grimm. You can't make this shit up, man.

I mean, seriously, what the fuck is up with this? 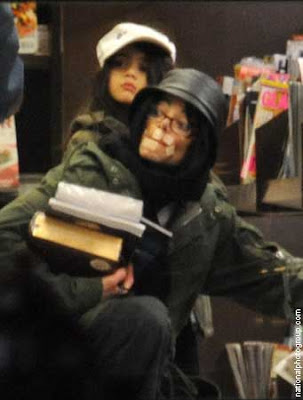 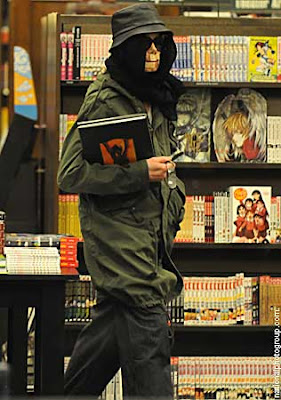 And I'm curious to know exactly what manga Mike's picking up. FROM EROICA WOTH LOVE, perhaps?

And at what point did Michael veer off into the Twilght Zone? I'd say the signs were there as of the video for THRILLER and perhaps before, but once the 1990's came along I'm convinced he fully lost his natural mind. If he ever willingly underwent deep psychoanalysis and consented for the results of his therapy to be published, I would spend a hundred bucks on that book just so I could finally have some answers. I usually don't give a fuck about the endless American celebrity train wrecks, but in this case I just gotta know!!!

You have to ask what's wrong with Michael Jackson?

I met him at Stan Lee Media back in 2000. What you see is what you get. He seemed genuinely interested in us drawing folk, reminded me of when Lou Graham (of foreigner) came through the Marvel offices...

He is one of the few rock stars that SHOULD be taking drugs.

What's amazing to me is how MJ is actually more frightening that the likes of Shagrath (Dimmu Borgir) or Lord Ahriman (Dark Funeral) based on his getups and overall visage. Those are some Black Metal stalwarts by the way.

Actually, I feel deep pity and compassion for Michael Jackson. If even half of the stories of his family are true, the kid was denied anything resembling a childhood by a batshit father who bullied his sons into stardom. (The "Jack-sons," indeed!) A fast-track commodity since he was five years old, little Michael was surrounded by the craziest star-shit a 1970s child could experience; from there, he became the biggest pop superstar alive, mostly by working himself and everyone around him into an exhausted pulp. Surrounded by money, press, sycophants and hangers-on almost since he was born, the poor guy has had hardly a "normal" moment in his life. His response has been to become as weird as possible, then wonder why the Pop Media Machine that once adored him has torn him to shreds.

As for his paedophilia, I have an unusual theory: Craving a childhood he never had, he's become fixiated on Little Boy mystique - obsessed with the image - not the reality - of boyhood. As an adult, that leads to some rather unhealthy behavior, and when you have virtually unlimited money and fame, you can become truly unhinged before people start to question your activities. I doubt whether he SEXUALLY TOUCHED those boys PHSICALLY. As anyone who understands "vibes" or "energy" knows, though, unbalanced or sick intentions can be creepy, toxic and violating even when no "bad touching" is physically involved. (Women understand this feeling well.)

Energy-wise, Jackson is an extraordinarily charismatic person. In psychic terms, he's a generator, a reflector - and a vampire. Jackson's charisma is such that he can command attention just by standing in a room, reflect (and amplify) the energies of the people around him by dazzling degrees, and absord (intentionally or otherwise) a large amount of those energies himself. This potent combination would be a lot for ANYONE to handle. Add it to an obsessed, disturbed child-man superstar (from a racial minority and abusive background, no less); throw in life-long fame from the brutally fickle Media Machine, and you have... well, see for yourself.

Poor guy. I wouldn't want Jackson within ten miles of MY kids, but I feel sorry for him. He needs to be in treatment, not a freak show.