COMIC BOOKS ARE FOR IDIOTS-HOUSE OF M: AVENGERS #1 & 2 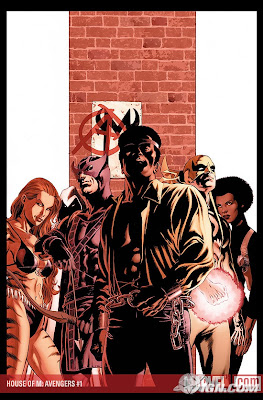 I'd heard good things about the HOUSE OF M series, yet another of Marvel's alternate history yarns featuring the X-Men and their assorted mutant brethren, but was leery of getting into it because that concept has been beaten to death since the first go round back in a two-part UNCANNY X-MEN story from twenty-six years ago. Marvel's never been shy to revisit a popular storyline, especially just about anything from the "classic" X-Men streak of the late-1970's/early-1980's, and next to the whole Dark Phoenix saga there's no other Marvel plot that's been hauled out more than "Days of Future Past" and its playing with the future of mutants.

While not a direct rehash per se, HOUSE OF M does once more deal with an alternate timeline, this time resulting from the Scarlet Witch's nervous breakdown and her reality-warping abilities rearranging things so that a world under the rule of mutants was now the status quo. When I briefly perused it on the stands, HOUSE OF M looked like more of the same rehash stuff, along with a cast of mutant characters that had grown at least six-fold since I gave up regularly reading their increasingly rote adventures (roughly 1987), and so I was thoroughly uninterested in what it had to offer. Even when the critical accolades started coming I just didn't care, but today at the comic shop I saw the cover for HOUSE OF M: AVENGERS #2 that featured a number of my favorite B-list Marvel heroes from the 1970's and was intrigued (although to be fair, many, including myself, consider Hawkeye an A-list hero, non-powered Green Arrow wannabe or not). The cover depicted Luke "Power Man" Cage — the "blackest" super-hero of all time, and I don't necessarily mean that in a good way" — Shang-Chi, Master of Kung-Fu, bionic-armed Pam Grier analog Misty Knight, the aforementioned Hawkeye, and the befurred and bikinied Tigra, most of whom inhabited a corner of the Marvel Universe culled from and dripping with the ambience of 1970's chopsocky/crime/blaxploitation flicks. And that shit, dear readers, is something I simply eat up (cue John and the inevitable "German" gag). My curiosity piqued, I picked it up and thumbed through it. In no time I wandered over to the counter and shelled out my cash for issues 1 and 2, convinced of the old school thrills to be found between the covers. 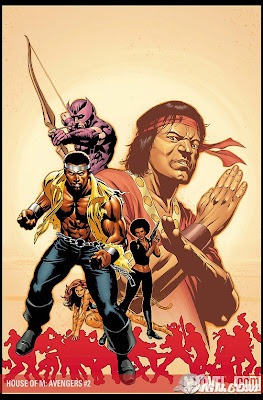 In the rewritten House of M status quo, non-mutant humans — referred to as "sapiens," which leads Luke Cage to utter the hilarious line, "Sapien, please" — now find themselves the "new Niggers," as Richard Pryor would have put it, and are slowly being edged out of quality jobs and housing, with some pundits predicting the extinction of the original strain within a hundred years. In the New York of this reality, Luke Cage, sporting his old school Calypso-singer-meets-pimp-in-a-tiara duds, runs a an organized crime gang at first composed of the leftovers from the previous leader's group, but as Cage's power base grows and run-ins with super-powered mutant cops become inevitable, he recruits a number of hardcore human badasses, both powered and not, including Hawkeye, martial arts master Iron Fist, ex-S.H.I.E.L.D. agent Mockingbird,Tigra, and Batman clone the Moon Knight. Staking territory in what used to be Hell's Kitchen and is now "Sapientown," Cage's crew kick lots of ass and right wrongs that the law doesn't give a shit about, swiftly becoming seen as the neighborhood's guardians, much like the Mafia of old, and earn the street nickname "the Avengers." There's lots of action and well-drawn character pieces, and even the bonus of a rivalry with Shang-Chi and his Chinatown gang, and as if that wasn't enough to satisfy a fan of the major league seventies vibe running through all of this, Cage's gang is infiltrated by an increasingly sympathetic Misty Knight while Frank "the Punisher" Castle's skills are pressed into service as the affirmative action human member of an all-mutant special ops squad who are assigned with bringing down both Cage and Shang-Chi, a situation that forces the two gangs to consider a merger.

As you've probably gathered, I enjoyed this quite a bit. It's no classic, but it's nice to see writer Christos N. Gage and artist Mike Perkins handle the Marvelsploitation gang with obvious affection and understanding, so I give this one a strong recommendation, especially for those among us who aren't too thrilled with the majority of Marvel's output in recent years and enjoy it old school and badassed. Sweet Christmas, TRUST YER BUNCHE!!!
Posted by Bunche (pop culture ronin) at Thursday, December 06, 2007

Tigra and Moon Knight - both characters who originated in the pages of Werewolf By Night.

So when does a retro take on Jack Russell (wing hair and all!) show up? That's what I wanna see...