THIS IS JUST PLAIN EXCELLENT 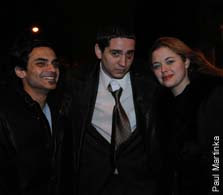 December 12, 2007 -- A Brooklyn man whose "Happy Hanukkah" greeting landed him in the hospital said he was saved from a gang of Jew-bashing goons aboard a packed Q train by a total stranger - a modest Muslim from Bangladesh.

Walter Adler was touched that Hassan Askari jumped to his aid while a group of thugs allegedly pummeled and taunted him and his three friends. So Adler has invited his new friend over to celebrate the Festival of Lights. The two new pals - Adler, 23, with a broken nose and a fat lip, and Askari, 20, with two black eyes - broke bread together and laughed off the bruises the night after the fisticuffs. "A random Muslim guy jumped in and helped a Jewish guy on Hanukkah - that's a miracle," said Adler, an honors student at Hunter College. "He's basically a hero. Hassan jumped in to help us." But Askari, who is studying to be an accountant, shrugged off the praise. "I just did what I had to do," he recalled. "My parents raised me that way."

Ten people were arrested in the underground attack on Friday night - including two men who have been arrested for race crimes before. None of the suspects had been charged with a hate crime in the Q train attack as of last night, but the Brooklyn DA's Civil Rights Bureau is handling the case.

It all began when Adler, his girlfriend, Maria Parsheva, and two other pals boarded the subway at Canal Street bound for Brooklyn and someone in another group wished them "Merry Christmas." Adler and his pal Angelica Krischanovich responded: "Happy Hanukkah." Apparently, those were fighting words. "They just came at us so fast. The first thing that came into my mind was, 'Yeah, this is going to be violent,' " said Parsheva, 20. One of the group immediately hiked up his sleeve to reveal a tattoo of Christ. "He said, 'Happy Hanukkah, that's when the Jews killed Jesus,' " said Adler.

The group of about 14 men and women then allegedly began taunting Adler and his pals as "dirty Jews" and "Jew bitches."
Amid a huge scrum, Askari jumped in. "I'm bleeding all over the place, there's lots of people, they're fighting with Hassan still, and I'm like, why isn't anyone else doing anything?" Adler said. He pulled the emergency brake right before entering the DeKalb Avenue station. Police came aboard and arrested 10 people, charging six with assault and four with unlawful assembly. One of those collared straphangers yesterday denied making anti-Semitic taunts and said his mother is Jewish.
Joseph Jirovec, 19 - the son of a city firefighter who is currently serving in Iraq - has pleaded guilty to a 2005 bias crime against blacks. "We are not racist against Jewish people. That whole hate-crime thing is ridiculous," the Brooklyn man said.
He claims Adler's group was drunk and taunted his group, and one yelled, "We killed Jesus." Jirovec will soon begin serving six months for his role in the attack against four men in Gerritsen Beach. "I'm trying to stay out of trouble," he said. "When I get out, I want to go into the military."


When the Nazis came for the communists,
I remained silent;
I was not a communist.

When they came for the Jews,
I remained silent;
I wasn't a Jew.

When they came for me,
there was no one left to speak out.

Nearly spit out my coffee on that one. We all know Easter follows Hannukka. Thats what you get for following a middle-eastern deity - things get lost in translation...

Why don't Christians ever attack Italians? Wasn't it the Romans who killed Jesus?

I was really appalled by this story, but I have to say that side of it makes me feel pretty good.

It's shit like this that makes one WANT to declare a "war on Christmas." Here's the end result of those fuckwits who've trumped up an utterly imaginary "attack on Christmas/Christianity" to cover up for real crimes like holiday layoffs, vetos on child health care, and REAL wars declared for fictitious reasons. Kudos to the Muslim dude - he's clearly more "Christ-like" than the so-called followers of the much-shamed JEWISH Nazarene.