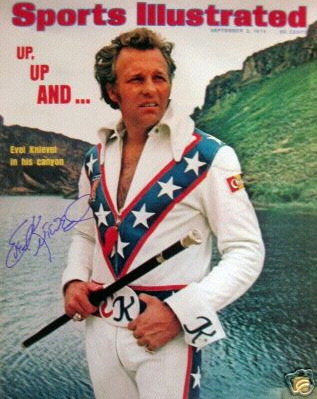 If you grew up in the USA during the 1970's, you no doubt know who Robert Craig Knievel, Jr. was. His fashion sense could fairly be described as Captain America-meets-Elvis, he once tried — and failed — to jump the Snake River Canyon in the gaudiest rocket you've ever seen, and his likeness graced a popular action figure that came with a stunt cycle that, when wound up and launched, destroyed fragile decorative items in households across the nation. Kids and adults alike thrilled to Knievel's loony stunt work, claiming to be drawn in by his bravery but secretly lured by the possibility of witnessing his gruesome demise in a flaming spectacle of twisted metal, blood, and a helmeted severed head rolling away from the wreckage, hopefully on fire. 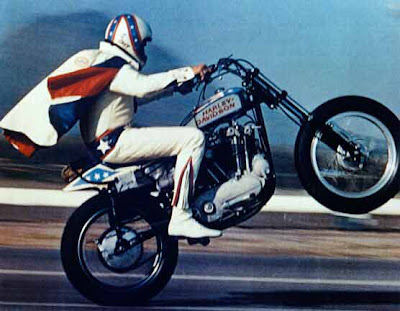 But that very suicidal drive to do the impossible (and, when you think about it, rather pointless) to delight his fans and overcome the boundaries placed upon him by the perceived limitations of the motorcycles he rode and his all-too-human body is what made him a cool and beloved 1970’s pop culture icon.

And now the guy's dead after battling diabetes and pulmonary fibrosis for several years, and that just ain't right. I always hoped, even in his frail dotage, that Evel Knievel would haul his creaking ass out of retirement for one last shot at self-destructive glory and go out in spectacularly awesome fashion while attempting to jump the exploding Death Star.

The way Evel Knievel should have gone out.

Too bad the guy couldn't have jumped the Grim Reaper and landed in back of him, tires a-screechin’, huge grin on his face, and flip the guy a gloved salute. But in the end, human frailty must inevitably win out. 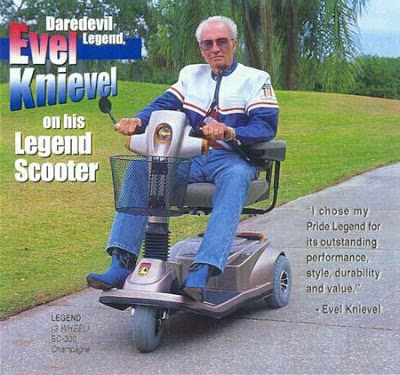 Our hearts go out to Evel's family and especially to his brother Gude.

The Snake river is NOT in Ohio!

To "Anonymous," your correction is noted and the correction has been made. I have no idea how I fucked that up but I'm glad you caught it, and I'm frankly surprised no one called me out on it five years ago. Thanks!

Evel K was our hero when we were kids, we never wanted to se him crash and were amazed at his daring feats. I wrote to him before he passed, telling him that. I liked that someone credited him with being "The father of the Xgames" RIP Robert.