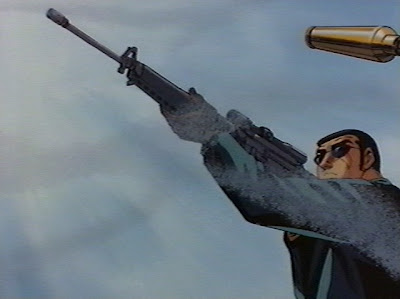 This anime adaptation of Takao Saito's long-running manga classic is one of my all-time favorite action movies, animated or otherwise, and I'm at a loss to explain why so many dyed-in-the-wool anime junkies despise it.

Duke Togo is the world's greatest assassin-for-hire, better known as "Golgo 13," and if you're on his list you might as well dig the fucking hole because there is no way, repeat, NO WAY you will elude him. Once he's hired, it's your ass. Period. Togo's adventures take him across the globe, and his skills with weaponry, hand-to-hand combat, and damned near anything else a human being could master are constantly put to hair-raising tests. Though lacking in actual metahuman superpowers, Togo could nonetheless be considered a superman, so with that in mind it's seldom in doubt that he'll come out on top in any given situation, so the suspense lies in seeing just how the hell he's going to pull off the often impossible assignments he chooses to accept. All of this information is old news to readers of the venerable manga series, but it's given the most cursory noting in the feature, seen briefly in a C.I.A. transcript at the film's beginning, but it's vital to suspending one's disbelief and once past that we're immediately thrust into Togo's violent world.

Gazillionaire industrialist Leonard Dawson throws a birthday party for his son, Leonard Jr., aboard his private cruise ship, a lavish ceremony in which he names his son heir and successor to his empire, but Dawson's elation is shattered when his son is surgically shot through the forehead with but a single bullet, killing him instantly. The assassin: Duke Togo. The senior Dawson, now nearly insane with grief, launches an all-out war against Golgo 13, employing the most vicious and lethal professionals that his bottomless coffers can procure, including horrific ex-military sociopaths, crooked intelligence officials, and an unspeakably terrifying monster of a man who rightly goes by the moniker "Snake," all while Togo hops the globe carrying out other "jobs." Togo must stay one step ahead of his assailants, each as hard as he is, and figure out how to survive one Christ Almighty shitstorm of graphic violence. And there also lurks the mystery that spurs the plot: exactly who wanted the junior Dawson murdered, and why?

Loaded with more action than most films have any right to possess, GOLGO 13 is a breathless kick in the ass that fans of old school James Bond and other such espionage will simply eat up, and you pretty much forget it's a cartoon about five minutes in. I first saw it on an untranslated VHS tape in 1986 and I've been a staunch supporter ever since, sharing it with as many people as I can convince to give it a chance despite its reputation as a bomb. I think it may come off as tame when compared to the later excesses in Japanese animation, such as post-apocalyptic slugfests filled with showering viscera, city-leveling psychic children and titanic robots, female ninjas with poisonous vaginas, and the ever-popular spectacle of sailor-suited schoolgirls having their every orifice checked for change by the tentacles and other bits of demonic rapists just before they explode in a torrent of offal and demonic DNA, but GOLGO 13 has all of them beat for sheer quality entertainment that even your parents might dig (but keep in mind that it would get a well-earned "Hard R" if submitted to the MPAA for a rating). I gave my VHS copy to comics legend John Romita, Sr. and he absolutely loved it, so if you don't believe me, trust Jazzy Johnny. But, as always, TRUST YER BUNCHE!!! 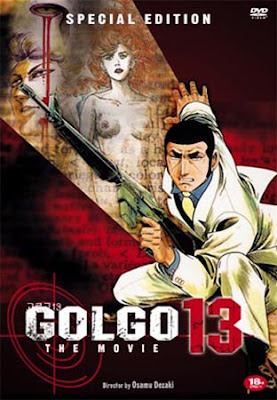