MY GOD, HOW I LOVE THE JAPANESE

The two guys seen in the picture below blew my mind when I first saw them on a VHS tape entitled JAPANARAMA some years back, and the untranslated comedy bit that featured them was surreal to the point of brain-melt. 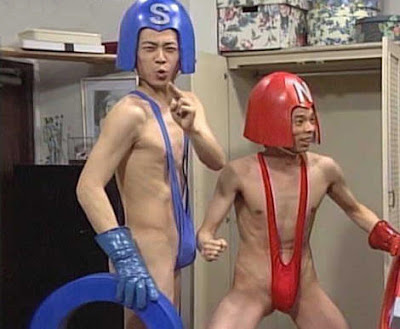 It's shit like this that belies the perceived image of the Japanese as a nation of stoic, conformity-minded drones, and, having seen JAPANARAMA and other equally crazy examples of their culture's humor, I gotta tell ya they're a bunch of hilarious motherfuckers (even if I don't necessarily understand the jokes). Their humor ranges from being as bizarre as MONTY PYTHON'S FLYING CIRCUS all the way to the depths of the most peurile slapstick and scatological bits I've ever seen, and I relish every second of it.

And if any of you learned and erudite readers out there in etherland have any explanation for the this bizarre superheroic duo, I beg of you to write in and tell me exactly what the fuck's up with this.
Posted by Bunche (pop culture ronin) at Monday, December 03, 2007

"My ass is always moist."