BY WAY OF EXPLANATION

Remember yesterday's photo of the Chanukah spiral ham? Well, here's an explanation of exactly what was up with that from today's New York Daily News: 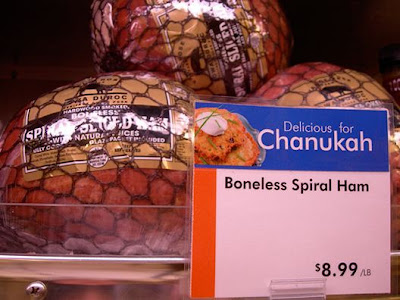 Balducci's in Greenwich Village advertises tasty boneless spiral ham as 'Delicious for Chanukah.' Store blamed a clerk for the gaffe.

The Greenwich Village gourmet grocery store, Balducci's, has become the butt of the Jewish holiday by advertising its boneless hams as "Delicious for Chanukah."

Manhattan novelist Nancy Kay Shapiro, 46, spotted the kosher faux pas while browsing the meat section Saturday at the chain's outpost at Eighth Ave. and W. 14th St. When Shapiro went back Sunday, she took photos of the unorthodox display promoting boneless spiral-cut hams for $8.99 a pound, petite smoked hams for $6.99 a pound and boneless smoked hams for $6.29 a pound. Instead of pointing out the mistake to management, she posted the snapshots on her blog to "amuse others." "I just thought it was funny," Shapiro, a self-described "unobservant Jew," said. "I wasn't offended in any way. I just thought, here's somebody who knows nothing about what Jews eat." Shapiro said that when she went back to the store Tuesday, the first night of Chanukah, the signs had vanished.

A Balducci's official was so verklempt about the error he didn't want to speak on the record. He fessed up that "it was a mistake," blaming it on a stock clerk who normally doesn't work the meat department. He referred all other questions to the company's marketing department in Connecticut.
Posted by Bunche (pop culture ronin) at Thursday, December 06, 2007