A FLASHBACK ON AARON BANKS

Last week in my review of Sonny Chiba's flick THE BODY GUARD I described a ludicrous bit of business tacked on by the film's American distributor that featured footage of real life martial arts masters Bill Louie — whom I described as resembling Freddie Prinze of TV's CHICO AND THE MAN — and Aaron Banks that, while idiotic, is the one moment of true entertainment to be had in all of the misbegotten film's running time. Well, one of my most avid readers, a dear friend and colleague from my days in the Marvel Bullpen, Eliot R. Brown, wrote in with this interesting story about his own true life encounter with Aaron Banks: 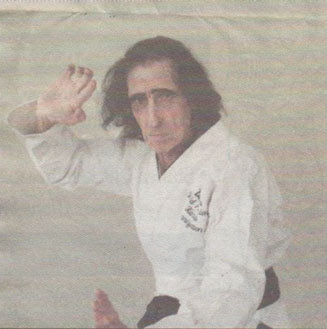 Grandmaster Aaron Banks today. The guy may be a senior citizen, but you'd better not fuck with him unless you're across the street and have a gun.

Well! Like any good reviewer, it hurts when your stars have feet of clay. But, one thing you mentioned that appeared in The Bodyguard, was a little visit to a dojo where somebody named Aaron Banks was standing...

Ahem... little Eliot was accosted by a hulking Chinese kid in Junior High School. There were 4 of his friends standing behind him, so when I was asked for my wallet -- to check that I really didn't have any money -- the kid swiped my library card. Alright, petty thievery indeed. But it alarmed my mom so much, she enrolled me into a karate class. Now, I wonder to this day just what was going through her mind. Was I to kick and chop my various assailants? It doesn't sound like my mom-- perhaps one of her friends suggested it. Of course, it was Aaron Banks' Karate school.

Anyway, I made my way there, after buying a cool gi at Honda's (23rd Street? Can't remember) and finding his run-down stairway that got me upstairs to the locker room. I really wasn't used to that, but I tried to act cool. In I went, in a very stiff gi into the classroom in that-- no doubt -- very same sleazy Times Square dojo (I don't remember any posters on the walls, but this 1967). At the time, I lived on 45th Street, off Lex., so I probably walked over.

Mr. Banks came in-- looking very much as you describe him (I think he's Jewish), asked a couple of questions, had us line up. He showed us how to really put on our gis just so, how to tie that belt knot the right way-- I quite remember that (and helped my son when he took karate) and then do a bunch of push-ups. I couldn't do mine-- since I'd never done any-- but Mr. Banks didn't seem to mind very much. Then he asked us if any of knew how to "roll." I said I did-- of course, I'd imitated every Jim West, Napoleon Solo and Joe Mannix fight move ever filmed. So, then he said, show us. I just did a shoulder roll. What's funny in retrospect, is that there was a huge, floor to ceiling picture window that overlooked the street at the far end of the dojo and I was rolling right for it. I think I did 4 complete rolls before I realized I was getting a littly carried away.

Again, Mr. Banks didn't seem to mind. He said, not that kind of roll and showed us how to break our falls-- I still remember to this day. He also showed us a proper kick-- I can still picture his toes curled up at an impossible right angle! Then he went on to perform an elaborate kata. And that was it-- out he went, with all the dignity befitting the place's owner.

Then in came the Korean son of a bitch who would actually teach us. He showed us a kata as well. He then said, come attack me. And the rat actually gave us good, hard kicks. Nothing lethal, but hey, I was 10! Of course, we never landed a 'glove' on him. After, he lined us up and had us do a series of punches and kicks. Then, the most fun-- we took turns punching a "makawara" board-- something like a block-shaped lump of sail cloth, supposedly with rice in it. This was to toughen up your knuckles. I got the look of disapproval by punching oddly with my middle two knuckles-- still do.

I think I lasted about four classes-- maybe six. The last class involved breaking boards. Now that was fun. I made it through three boards at once-- when I went up to four, I had learned fear and hesitated too much.

Somewhere there is a picture of me in my full gi-- white belt and all. The lucky bonus of the shot is that the Instamatic that took the pic got my retinas to glow a perfect, demon-haunted red. Ideal! And I still have a killer jump kick-- I actually did learn a lot from that Korean bastard, but hardly ever saw Mr. Banks again.

The next time I saw him, he was a "second" to Bill "Superfoot" Wallace in some big karate tournament that was covered on early TV. I recently heard he's not doing too well-- quite old and didn't save a dime.

I think you're the first person to get this whole story in 35 years!